The things that chemists do when they are not doing chemistry can make interesting reading, and I came across a particularly interesting example in Tim Bonyhady’s The enchantment of the long-haired rat. To get the rat out of the way first, it is an Australian rodent Rattus villosissimus that has attracted the attention of zoologists because of the great fluctuations in its populations, breeding massively after rains and then apparently disappearing. The chemist, to whom Bonyhady devotes most of a chapter, was Hedley Herbert Finlayson (1895–1991).

At age 15, Finlayson was a cadet in the department of chemistry at the University of Adelaide but he also maintained a home laboratory in which he dabbled in explosives and claimed to have discovered one that was more than 20% more powerful, and moreover more economical, than any then in use. I never found out what this material was, but I did learn that in 1910 he discovered another of its properties: that it was extremely shock sensitive. The explosion cost him the ‘tops of three fingers and the thumb of his left hand’, according to the Adelaide Advertiser. Undeterred, Finlayson continued his investigations and a second explosion in 1913 cost him the rest of his left hand, part of his right thumb and also his right eye. Professor Edward Rennie, with whom he worked at the university, wrote to the paper to say that Finlayson’s work at the university had no connection whatever with explosives.

In his history of the Adelaide department, Discoveries by chemists (1987), Rupert Best writes that Finlayson stayed with the department for many years, as assistant lecturer and demonstrator. He never graduated but did hold a scholarship in 1918 for work on the pigments of Drossera whittakeri and the investigation of grass tree resins. On this latter subject, Finlayson published papers in the Journal of the Chemical Society in 1920 (with Rennie and W.T. Cooke) and 1926 (as sole author). In the 1920 paper, the authors wrote ‘this investigation has been carried out by us as a special committee appointed for the purpose by the Australian Commonwealth Institute of Science and Industry’. It wasn’t clear why the Executive Committee of this body, a precursor of CSIR and thus of CSIRO, that made the grant, was interested in the grass trees (Xanthorrhoea). It was known at the time that the resin (also known as yacca gum) could be used in varnish, and that treatment of the resin with nitric acid yielded picric acid, used as a dye and an explosive. The Adelaide group examined the gums of several species of Xanthorrhoea, from which they isolated small quantities of coumaric acid, p-hydroxybenzaldehye, paeonol (2-hydroxy-4-methoxy acetophenone) and citronellol. Some species had red resin, others yellow, and although the researchers did not say so, there was a hint of chemotaxonomy about their work.

Before long, Finlayson’s organic chemistry gave way to a growing interest in the mammals of central Australia. While he continued as (what we would now call) a professional officer in the chemistry department, he financed research and collecting trips in South Australia and the Northern Territory and he became honorary curator of mammals at the South Australian Museum. There is a fascinating account of Finlayson’s life in the Australian Dictionary of Biography, in which his 1935 book, The Red Centre: man and beast in the heart of Australia, is praised and it is noted his photograph collection is now held by Northern Territory Archives and his mammal collection in Alice Springs.

Finlayson published five papers on his mammal work in Nature, and I found two of them specially interesting. In 1932, he responded to a remark by a British zoologist that ‘the kangaroo is never known to utter any kind of sound’. Finlayson wrote under the heading ‘Vocal Powers of Kangaroos’ to say that he identified several sounds made by macropods, one being a ‘short, clear-cut bark or cough, made as a warning signal by a member of a “mob”, when suddenly disturbed’. He issued another challenge to received wisdom in 1948, this time that ‘one of the most prominent items of anatomical evidence in support of the antiquity of man in Australia has been a fragment of a human molar’ found in the Wellington Caves of New South Wales. On the contrary, he argued, the tooth ‘was derived from the posterior half of the upper fourth premolar or seccator, of the right side, of Macropus (Protemnodon) anak Owen, a giant Pleistocene “wallaby”, remains of which are already known from the caves’. He promised that an illustrated account would follow, but I’m not sure it ever did.

﻿Ian D. Rae FRACI CChem (idrae@unimelb.edu.au) is a veteran columnist, having begun his Letters in 1984. When he is not compiling columns, he writes on the history of chemistry and provides advice on chemical hazards and pollution. 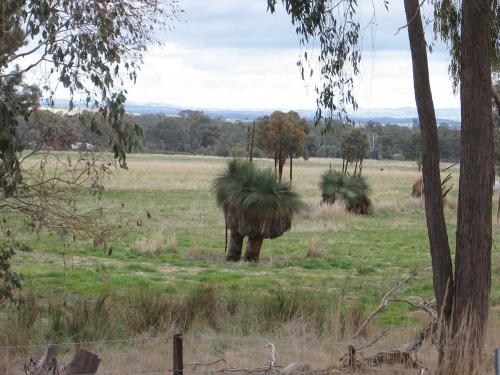 Before long, Finlayson’s organic chemistry gave way to a growing interest in the mammals of central Australia.