Chemistry collaboration with Pakistan: An opportunity

International review team members and academic visitors report on collaboration in chemistry education and research between Australia and Pakistan.

Pakistan and Australia have a long history of cooperation in the field of education and research that extends back to the formation of the Colombo Plan in 1951. Pakistan and Australia were two of the founding members of the Colombo Plan for Cooperative Economic and Social Development in Asia and the Pacific (its original full title), the others being Canada, India, New Zealand, Sri Lanka and the UK. It now includes 26 member countries, some of whom are not former members of the Commonwealth. The Pakistan country brief of DFAT notes in late 2017 that there were more than 64 000 Pakistan-born people living in Australia (August 2017), just over 12 000 Pakistani students were enrolled in Australian educational institutions (2016) and 23 Pakistani students were studying in Australia under the Australia Awards program.

Opportunities for research collaboration with Pakistan have been increased recently through the signing of agreements between Pakistan’s Higher Education Commission (HEC) and individual Australian universities to co-support PhD students studying in Australia. The institutions (as of January 2019) are:

The number of institutions is expected to grow. Under such an agreement, the HEC provides a living allowance and travel grant to the student, and the Australian university waives the fees. A significant number of such students are already enrolled in various Australian universities, some of whom also provide a ‘top-up’ to the HEC allowance. The usual agreement does not specify areas of study although the HEC reserves the right to identify priority areas.

The opportunity of cooperation in chemistry is evidence-based through our recent bibliometric analysis of research cooperation between the two countries (doi.org/10.29145/sir/21/020101). The Web of Science large database has been searched for science research papers that were co-authored by at least one author from Australia and one author from Pakistan (as revealed in their institutional addresses). The decade 2007–2016 was covered to reveal the national profiles for each country (all papers) as well as the co-authored papers in each of the Web of Science fields of study.

For chemistry, the graph shows that chemistry in Pakistan is a strong component of its national science research output, reaching close to 15% of all research papers, while for Australia, chemistry is above 5% of national output. The magnitudes are of course quite different, with Australia’s national output very much greater than that of Pakistan (by about a factor of ten). Collaboration is strong in agricultural sciences, physics and plant and animal sciences, but not quite so strong in chemistry (as a percentage of collaborative output). In fact, in 2015, there were only 15 collaborative chemistry papers involving Australia and Pakistan authors. However, clinical medicine (biomedical sciences) is similar for collaborative output but lower for chemistry.

We have reported earlier (March 2018 issue, p. 29) the growth of regional chemistry collaboration. Collaboration with PR China dominates the current situation: it has grown very strongly across that decade to be almost a factor of ten greater than the collaborative output of Australia with Japan or India, the next two countries for research collaboration in chemistry.

Pakistan has a well-developed system of higher education institutions. This strengthened dramatically following the appointment of Professor Atta-ur-Rahman as the chairman of the Higher Education Commission of Pakistan between 2002 and 2008. The recent establishment of the co-funded scholarships for PhD students is a clear opportunity for Australian chemistry researchers to recruit research students.

The institution that is perhaps best known to Australian chemists is the Hussain Ebrahim Jamal (HEJ) Research Institute of Chemistry, which is now an advanced research centre within the diversified International Centre for Chemical and Biological Sciences (ICCBS) at the University of Karachi.

The HEJ Institute (named after an early benefactor Hassan Ebrahim Jamal) is a centre of excellence for phytochemistry and natural products chemistry linking to medicinal drugs and treatments. The first director of the HEJ Institute was Professor Salimuzzaman Siddiqui, a distinguished Pakistani chemist who was elected a Fellow of the Royal Society in 1961. He was appointed in 1976. Siddiqui retired as co-director of the HEJ in 1990 but continued to work in his laboratory into his 90s. In 1977, Professor Atta-ur-Rahman was appointed co-director.

Under the leaderships of these three people, the Institute has grown remarkably to be an institution of international significance with facilities of international quality. The ICCBS has held and continues to hold high-profile research-based workshops and conferences that offer the opportunity for researchers to engage with the Pakistan community. For example, it hosted in 2013 the Golden Jubilee meeting of the Asian Symposium on Medicinal Plants and Spices and Other Natural Products (ASOMPS XIV). This series of conferences began in 1960 in Peshawar, Pakistan.

The Institute now has 13 Bruker NMR spectrometers in place, working round the clock: three 300 MHz, four 400 MHz, three 500 MHz, two 600 MHz and a recently acquired Bruker Ascend 800 MHz instrument with cryogenic probe. Helium is recovered, and additional supplies are obtained close by, from Dubai. One of the 300 MHz NMR spectrometers is identified as ‘the oldest functional superconducting NMR spectrometer in the world’ with Bruker manufacturing number of 101. Other instrumentation of comparable quality, including high-resolution mass spectrometers, is also housed in the various institutes on the campus, such as ICP MS, typical molecular biology equipment and biotechnology incubators.

The ICCBS maintains a compound bank of more than 16 000 characterised compounds, more than 100 cell lines for research use and more than 200 microbial strains, including bacteria, fungi and parasites. The value of compound libraries for applied and basic research has been described in an earlier issue (November 2007, p. 14).

A senior institute staff member, Professor Md Raza Shah attended the Ethics Workshop in Kuala Lumpur in 2014 sponsored by the American Chemical Society that generated the Global Chemists Code of Ethics (bit.ly/2PGPRHZ). Subsequently, the Chemical Society of Pakistan has presented 14 workshops in various cities across the country on chemical safety and security. Participants in a few of these workshops have included chemists from neighbouring Afghanistan.

Two of us, Noller and Spurling, have visited the Institute on two occasions as members of an international review team (both teams were led by Dr Noller, who had additional visits to follow up on review progress in December 2006 and December 2007). The first review was in 2005 and the second was in 2014. The 2005 review group included Professor David StC Black from UNSW, Professor Kelvin Chan from Hong Kong Baptist University, Hong Kong, Professor Ning-Sun Yang from Academica Sinica, Taipei Taiwan; and Dr Lindsay Sparrow from CSIRO Health Science and Nutrition, Melbourne. Noller, Black and Spurling returned for the 2014 review and were joined by Professor Jack Ng (toxicology and biomedical science) from the University of Queensland to complement the shift to biomedical sciences and growth of activity in the PCMD (established in 2004).

One of us, Webb, spent two weeks as an Institute visitor in February 2019. At that time, the Centre participated in the global Women in Chemistry breakfast, with more than 200 women attending. At present, more than half the research students are female. Professor Mary Garson, from the University of Queensland and a leader with IUPAC for this breakfast, attended by video link.

We hope that this account will encourage more chemistry collaborations with the chemistry community of Pakistan, through the new opportunity of co-funded PhD research students. 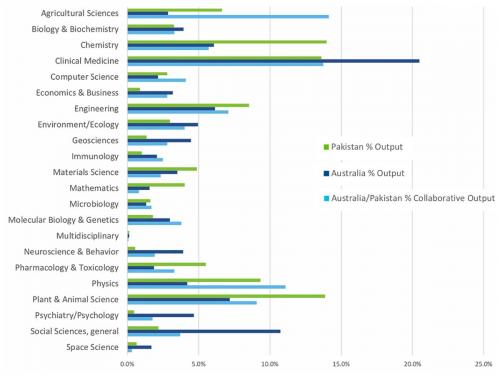 Science research papers co-authored by at least one author from Australia and one author from Pakistan. (Data extracted from the Web of Science covering articles and reviews for 2007–2016). 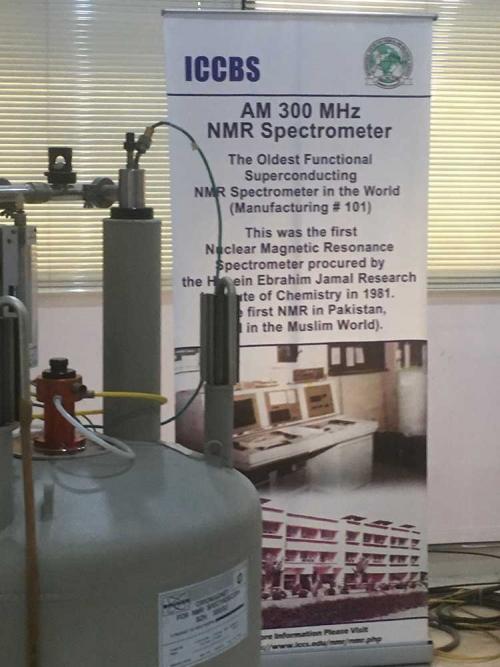 A poster describing the oldest NMR unit at the HEJ Institute. 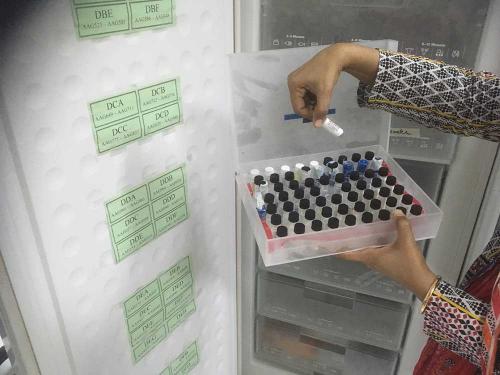 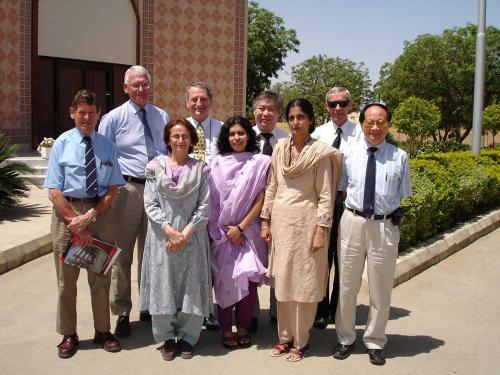 Australian chemistry is well placed to extend its international research links to Pakistan.