The rise and rise of gallium

Dave Sammut and Chantelle Craig report on the history and emerging applications of an element with a controversial past and strategic future.

Early on the morning of 7 September 2010, the Chinese fishing vessel Minjinyu 5179 was detected in disputed Japanese territory near the Senkaku Islands. During the subsequent chase, the Chinese vessel reportedly twice rammed Coast Guard vessels. Its captain and crew were arrested and detained.Within three weeks, the Japanese controversially capitulated to escalating Chinese diplomatic pressure to release the captive fishermen.

Regardless of its diplomatic victory, China took direct retaliatory action that precipitated a global metals crisis. With more than 95% of global capacity for the production of purified rare earth metals and oxides, the Chinese were in a position to strangle international supply. Prices skyrocketed until two successive World Trade Organization judgements declared China’s actions illegal. In 2015 the country was forced to remove trade restrictions.

The West was delivered a lesson in how incredibly vulnerable its supplies of key strategic metals had become. By December 2017, under Presidential order, the US Geological Survey (USGS) had issued a list of more than 30 critical minerals ‘essential to the economic and national security of the United States’.

This is not another story about the (somewhat misleadingly named) ‘rare earth’ metals. It’s about an element that hasn’t been in the news, an element with a storied history and an increasingly strategic future: gallium.

Gallium came to the scientific community in fascinating, if somewhat controversial, circumstances. When Dmitri Mendeleev first laid down his version of the periodic table in the 1869 German publication Zeitschrift für Chemie, he left several spaces for elements yet to be discovered. Most importantly, he used the periodicity of his approach to predict the elements of these as-yet unknown elements.

One of these Mendeleev named ‘eka-Aluminium’, borrowing a Sanskrit word for the prefix, most usually translated as ‘beyond’. He predicted that the missing element would have an ‘atomic weight’ (more accurately, a relative atomic mass) of approximately 68 grams, a density of about 6 g/cm3, valence of 3 and a low melting point, and that it would be discovered by spectroscopy.

When French chemist Paul-Émile Lecoq de Boisbaudran discovered this element six years later with spectroscopic studies, Mendeleev was quick to claim a portion of the credit. This didn’t go down well, and the two soon began to argue in the scientific journals. It was an early version of a ‘flame war’, at a time when the Bunsen burner had only recently been invented.

Lecoq de Boisbaudran claimed that he had never seen Mendeleev’s table, and later that Mendeleev had stolen his idea from an obscure French researcher. Conversely, observers have argued that Lecoq de Boisbaudran specifically looked for gallium in zinc-bearing sphalerite ores on the basis of its proximity and anticipated similarity to zinc. His first pure sample of 0.65  grams of gallium was painstakingly extracted from 430 kilograms of ore, which is a lot of trouble to go to if Lecoq de Boisbaudran wasn’t fully expecting the new element to be present.

Lecoq de Boisbaudran’s troubles didn’t end there. He was accused of naming gallium after himself (Lecoq, ‘the rooster’, is gallus in Latin), while he insisted that the name was a patriotic reference to Gallia, the Latin for France.

Escalating the feud, Mendeleev declared that Lecoq de Boisbaudran’s initial published characterisation of the properties of this new element were incorrect, because they didn’t match his predicted values. After more thorough testing, Mendeleev was proved correct, and Lecoq de Boisbaudran was forced to retract his initial data. It was a major vindication for Mendeleev’s still-contentious periodic table, and for theoretical science over empirical science in general. In the words of Albert Einstein, ‘It is the theory that decides what can be observed’.

As it turns out, gallium’s actual values are atomic mass 69.72 grams, density 5.9 g/cm3, valence 3, and melting point just 29.7°C. It is one of only four metals that melt at low temperature (the others being mercury, caesium and francium). This curious property was the basis for a famous 19th-century practical joke. The jokester would cast a lustrous grey metal spoon (somewhat like aluminium) in gallium, which would rapidly melt when used to stir the unwitting victim’s tea. Sam Kean used this for the title of his entertaining science history book The disappearing spoon.

As Mendeleev predicted, gallium is reactive with both acids and alkalis. Unlike even aluminium, its elemental form is never found in nature, and it is most commonly found as a substitute for elements with similar atomic size and charge, particularly in bauxite, sphalerite and (by mechanisms still unknown) coal. Even in these materials, it is relatively scarce (around 50 g/t).

With such low abundance, there are no economic primary sources of gallium. It is recovered only as a by-product, with about 90% of primary global supply coming from the Bayer process for bauxite processing to alumina. Under the highly caustic Bayer conditions, both the aluminium and gallium dissolve:

Upon cooling and seeding, the aluminium is precipitated from the Bayer liquor:

but with its higher solubility, the gallium stays in solution. Over multiple cycles, the gallium accumulates in solution, up to about 300 mg/L. Up until the 1990s, this was then recovered by a multistep process of carbonation/acidification, redissolution and reprecipitation, but modern processes are more likely to employ solvent extraction to recover the gallium.

Like many elements, gallium remained in relative obscurity up until the 1950s, towards the dawn of the modern electrical age. It is stable in dry air, but reacts slowly in the presence of moisture to form a protective Ga2O3 layer, much like aluminium. It does not react with water below 100°C, but reacts with mineral acids to form 3+ cations. Being amphoteric, it reacts with alkalis to form gallates Ga(OH)4–.

It readily forms alloys with other metals that have lower melting points than each of the other components (eutectic properties). More importantly, its position on the periodic table means that it forms stable compounds with group 15 elements (nitrogen, phosphorus, arsenic and antimony) and group 13 elements (aluminium and indium). Its most commercially useful compounds are nitride (GaN), arsenide (GaAs) and more complex compounds such as copper–indium–gallium selenide (‘CIGS’).

Chemists would remember that the 2014 Nobel Prize in Physics was awarded to Japanese researchers Professors Isamu Akasaki, Hiroshi Amano and Shuji Nakamura for their revolutionary use of GaN in the development of blue LEDs. Developed in the 1990s, these blue LEDs (and their ability to combine with red and green to give white light LEDs) now form the basis for a substantial and growing portion of global gallium demand. Beyond just electrical devices such as TVs and mobile phones, white light LEDs offer much better electrical efficiency than most alternatives.

Gallium utility in LEDs (as both GaN and GaAs) stems from its semiconductor properties. When current is applied to crystals of sufficient size (a major aspect of the Nobel Prize), the energy is directly converted to a photon of light, without the heat wastage associated with incandescent or fluorescent lighting.

More recently, GaN is emerging as a critical transistor material in developing radar systems for the detection of stealth aircraft. Conventional radar primarily operates in the ‘X band’ of 8–12 GHz, the beams of which stealth aircraft are designed to deflect, so that the signal does not return to the radar. Emergent platforms (particularly those being developed by the Russians and Chinese) reportedly use different frequencies, particularly the ‘L band’. The L band transceivers require more power and cooling, where GaN can offer very high power, while generating little heat.

Moreover, gallium nitride transistors can achieve much faster switching, which is useful for both modern active electronically scanned array (AESA) radar and computing in general. Where silicon devices can work in gigahertz switching, GaN is reported to achieve terahertz. Combined with its low heat generation and better energy efficiency, this could be transformative technology.

Another substantive and growing market for gallium is photovoltaics, particularly in the use of CIGS, and as a minor component in NdFeB magnets. With the much larger mass of magnets, even this small usage is expected to significantly influence demand in coming years.

As noted earlier, most of the current primary gallium supply comes as a by-product of base metal production (particularly Al). There is also production from secondary sources, but importantly this recycled gallium only comes from the wastage in the production processes using gallium materials. At the moment, there is no satisfactory recycling technology for post-use gallium materials.

While market data is thin for most minor metals, available data suggests that the 2016 market for gallium was about 300–375 tonnes. This is estimated to grow at least 20-fold by 2030. According to the USGS, approximately 80% of primary production capacity was located in China as at the end of 2015. While the West does have a greater proportion of the small secondary production capacity, it is little wonder that gallium featured on the USGS’s critical minerals list.

Gallium is an essential component of the digital world, and its range of uses is only set to grow in both civilian and military applications. For an element that emerged into the world in contentious circumstances, it would seem that its period of contention is not yet over. We’ll be hearing a lot more about this element over coming years.

Deep underground in the Baksan valley of the Northern Caucasus, Russia, lies a truly interesting facility – the Baksan Neutrino Observatory. Staffed by scientists and engineers from the local village of Neutrino, the laboratory uses the thick layers of soil and rock to shield the observatory from muons produced by cosmic radiation in the atmosphere.

About 50 tonnes of liquid gallium are used as a target for an experiment to detect low-energy solar neutrinos, to confirm cosmological theories about the solar flux. In 1965, Vadim Kuzmin proposed that solar neutrinos generated by proton–proton fusion reactions at about 0.4 MeV could be measured using the reaction:

An undisclosed chemical technology is used to extract about 15 germanium atoms from the 50 tonnes of liquid gallium each month. The decay of the germanium-71, with a half-life of 11.43 days, is detected by counters. Each detected decay corresponds to one detected neutrino.

Ongoing experiments at this and other facilities around the world continue to probe the neutrino frontier, with gallium playing an essential role in being able to selectively detect low-energy neutrinos down to a limit of 233 keV. 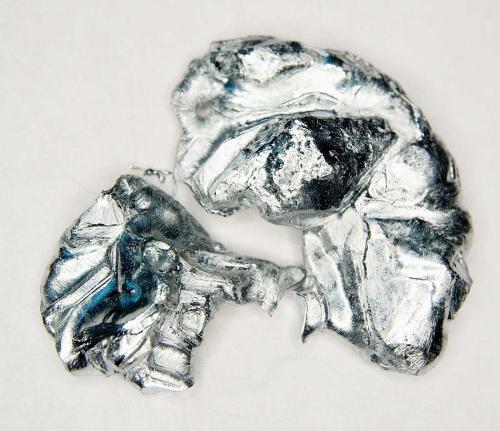 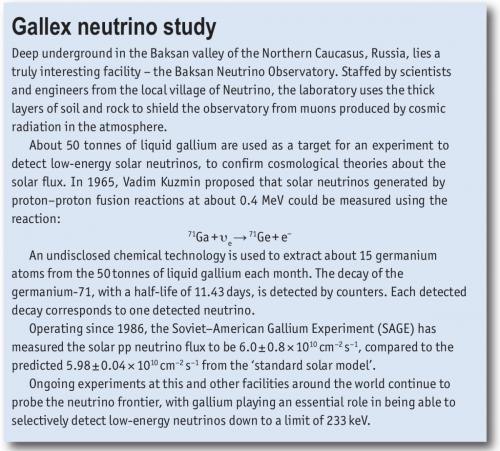 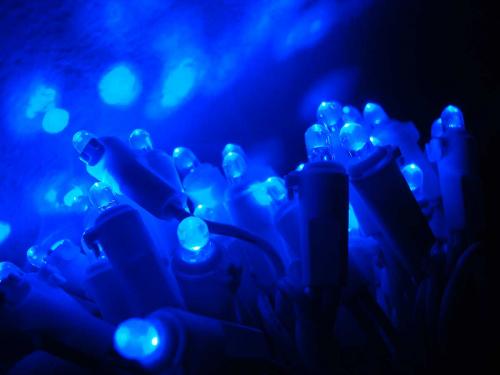 ... blue LEDs (and their ability to combine with red and green to give white light LEDs) now form the basis for a substantial and growing portion of global gallium demand.