A recent media release from the University of Adelaide was entitled ‘Discovery shows wine grapes gasping for breath’ (bit.ly/2kID9tP). A somewhat eye-catching title perhaps for an article that summarised recent research on hypoxia (deficiency in the amount of oxygen reaching the tissue) in grape berries that in turn may lead to cell death. Cell death in some wine grape varieties can lead to potentially negative impacts on grape composition and consequently affect wine characters.

The research was performed by PhD student Zeyu Xiao, from the ARC-funded Training Centre for Innovative Wine Production, together with Professor Steve Tyerman, Chair of Viticulture at the University of Adelaide, Dr Victor Sadras from the South Australian Research and Development Institute and Dr Suzy Rogiers, NSW Department of Primary Industries, Wagga Wagga. This research on oxygen access into the ripening grape berry is a great example of the combination of viticulture science and analytical chemistry and is published in the open access Journal of Experimental Botany (2018, vol. 69(8), pp. 2071–83).

Some grape berry anatomy to commence this story. The pericarp of a grape berry is the zone between the skin or epidermis and the seeds. The pericarp itself consists of three layers: external exocarp, inner endocarp and the central bulk known as the mesocarp. Cell death in the mesocarp was the focus of this present study. The berry is connected to the pedicel, which in turn is connected via the peduncle to the vine stem. The presence of lenticels, pore-like structures, are required to allow gas exchange, and oxygen ingress in particular, to the interior tissue. In grape vines, lenticels are present on the skin of the berry and the pedicel, although those on the skin can be blocked by wax (Rogiers et al. American Journal of Enology and Viticulture, 2004, vol. 55, pp. 121–7), leaving the pedicel to play the crucial role in oxygen access.

Now to the analytical chemistry side. Direct oxygen measurements within the mesocarp were achieved using a Clark-type microelectrode. The challenges in setting up the electrode were, first, the need for the skin to be punctured and, second, creating a seal to stop air ingress around the electrode during measurements. The electrode was calibrated in sugar-free solutions. The extent to which the high sugar content of the berry affected the accuracy of the electrode response seemed not to be assessed. Measurements were performed on three separate berries to assess the reliability of the measurement strategy.

The object of the measurement was to determine the oxygen profile through the mesocarp. The presence of seeds in the case of Shiraz limited the depth to which the electrode could be inserted. A full depth profile could be achieved with Ruby Seedless, a table grape variety, and also for Chardonnay. The seeds in Chardonnay could be visualised and the direction of electrode insertion adjusted appropriately. 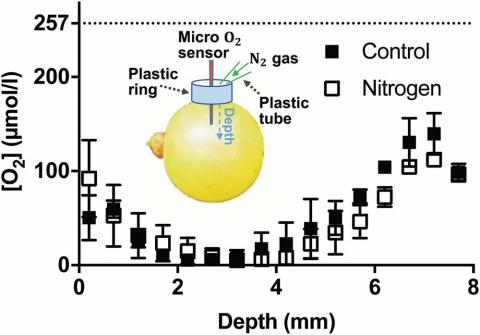 The same oxygen concentration/cell death relationship was not observed in Ruby Seedless, suggesting that seeds could contribute to the oxygen concentration/cell death profile in the seeded varieties. Seeds consume oxygen during respiration. However, separate experiments showed that seed respiration declined markedly in the latter stages of ripening, essentially discounting this biochemical process for the lack of oxygen.

The second proposal for reduced oxygen in the mesocarp is a reduction in air ingress. X-ray micro-computed tomography identified air spaces in the berry. A more detailed description of berry anatomy than described above shows that these air spaces are connected to the lenticels in the pedicels and are the source of oxygen to the berry. This was demonstrated in experiments where the lenticels were blocked with silicone or flushed over with nitrogen, resulting in a significant drop in the internal berry oxygen concentration. In essence, the reduction in air ingress leads to hypoxia or ‘grapes gasping for breath’.

There are significant outcomes of this research for future grape growing with the increasing temperatures that are linked to global warming. Higher temperatures result in an increased respiratory demand as well as lenticel blockage. As the study authors suggest, the outcome of this study provide a basis for viticulture management in a warming climate. 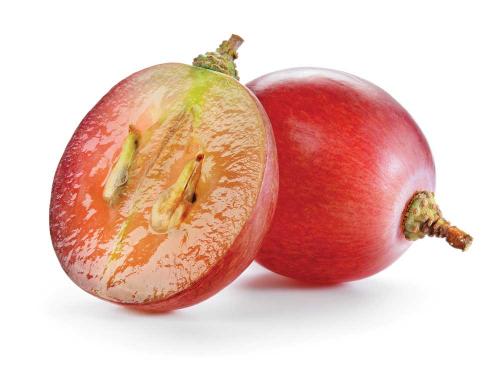