Iron roughnecks: unmanned automation in the oil and gas industry

When we think about our future workforce, perhaps one of the hottest topics of the moment is the rise of collaborative robots. While we prepare for the co-existence of automated and human workers, we’re also placing robots in some of the world’s most remote and far-flung working environments.

Located on the Norwegian North Sea, there’s something different about Equinor’s Oseberg H platform. With no toilets, living quarters or coffee break facilities, this oil rig was not built with human workers in mind. Remotely operated from the Oseberg field centre eight kilometres away, this is the world’s first fully automated oil and gas platform.

As human workers transition from offshore oil rigs to onshore monitoring and automation managing roles, addressing the challenges that come with an automated, remote workforce is an important step towards developing more facilities like Equinor’s in the future.

Many factors make offshore the perfect candidate for unmanned automation. Inherently dangerous operations, long stints at sea and remote locations make for unattractive working conditions. With an eroding human workforce, the industry is increasingly turning to robotics to carry out its operations.

When robots were first introduced to offshore environments, they were assigned rather menial tasks. While machinery continues to carry out processes such as screwing drill pipes and connecting them into well holes, today’s offshore robots are capable of much more.

For instance, Swiss robotics company ANYbotics has developed a four-legged robot fitted with a sensor head to carry out monitoring duties offshore. Named the ANYmal, its pilot installation in 2018 proved that the robot is capable of autonomously performing a range of inspection tasks, including thermal measurements and checks on water levels.

For robots to be able to achieve this level of monitoring requires them to carry a variety of sensors and cameras. Using visual sensors, robots are now able to ready gauges with computer vision by training the sensors with a variety of images. Once trained, the sensors can read gauges by capturing real-time images of the system and comparing them to stored images on servers.

In the case of a patchy connection or rough conditions that impede visibility of the gauges, the images can be saved for remote interpretation. Gauges aren’t the only part of machinery that can be read; in fact, systems of this sort can also be trained to read and interpret a variety of other read-outs – components such as valves and identify faults.

For example, computer vision systems could be trained to identify changes in the colour of materials to detect rust or other contaminants that could put the structural integrity of a material at risk. Conversely, the robot could simply film the inspection and send it to onshore locations for engineers and specialists to review either live or after the inspection is complete.

In the case where light is scarce, or applications are in remote areas with constant poor visibility, robots can be attached with pH probes to inspect the pH levels of a material and send the information back to onshore specialists.

Many offshore operations have been running for a long time, meaning that they precede the advent of widespread use of smart sensors. This means that thermal and vibration data is not always being collected. Widespread miniaturisation now means that robots can have these sensors easily retrofitted.

Robots can use thermal imaging to register the temperatures of applications and check whether they are in the safe limits and determine the presence of any hotspots. Acoustic sensors allow robots to listen to the vibrations of machinery, comparing it with historical acoustic data to identify if urgent action needs to be taken. This drastically reduces the cost of retrofitting entire complexes with smart sensors, especially on older rigs.

A successful unmanned platform would require continuous monitoring to keep track of its automated workforce. The technologies to facilitate this already exist, meaning unmanned facilities could be easily installed across the globe. For example, supervisory control and data acquisition (SCADA) software can continuously monitor and detect machinery faults and raise the alarm to alert maintenance engineers.

This approach can be taken further by retrofitting equipment such as sensors and programmable logic controllers (PLCs) to build a digital interface that helps onshore engineers retain insight into their offshore facility. By measuring factors such as energy consumption, leak detection and equipment failure, implementing small changes to a platform’s operations could massively boost its autonomy and facilitate efficient remote management.

Developing an automated offshore structure isn’t as easy as ripping out restrooms and sending workers ashore. For robot roughnecks to elevate production, offsite engineers must take a number of factors into consideration.

The terrain of an offshore platform can be pretty treacherous if you aren’t equipped with hands and feet. Facilities host a range of complex installations, including networks of pipes and steep stairs that connect multiple levels.  While such an environment is no challenge for a human worker, the platform’s layout may require refurbishment to make it accessible to our automated counterparts. In parallel to this, robots themselves will need to be programmed with a high degree of autonomy so that they can manoeuvre any obstacles.

Another hurdle is risk management. If a piece of equipment malfunctions or risks breakdown, a lack of on-site human workers may delay vital maintenance. Establishing relationships with parts suppliers, such as EU Automation, will be crucial in minimising downtime at an unmanned site by ensuring that replacement parts arrive with speed.

The Asia–Pacific region is a huge, growing market for the oil and gas industry – predicted to account for 70% of global oil demand by 2020. As demand for this incredibly challenging industry shows no sign of ceasing, unmanned automation could well be the key to maintaining productivity.

We may not be handing the reigns over to four-legged robots any time soon, but achieving autonomous offshore operations is certainly in our reach. 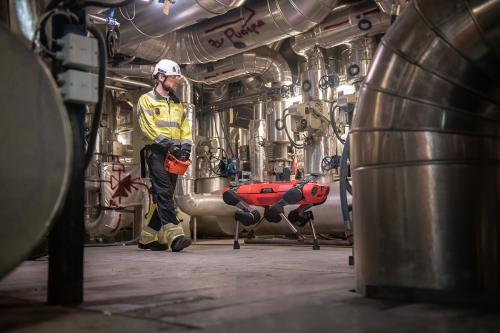 This ANYmal includes a remote control for automated industrial inspection. 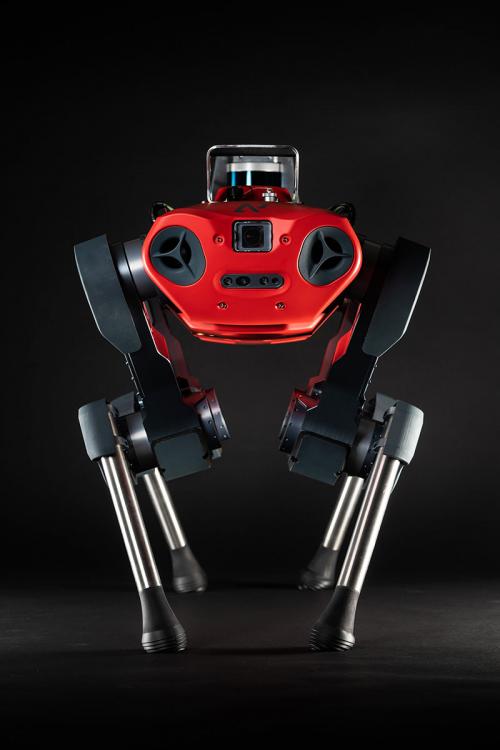 ... the ANYmal ... robot is capable of autonomously performing a range of inspection tasks, including thermal measurements and checks on water levels.