International Day of People with Disability and ‘Disability 101’

On Saturday 3 December, Australia celebrated International Day of People with Disability (IDPwD). IDPwD is a United Nations observed day proclaimed by the UN in 1992 and observed by Australia since 1996. It aims to increase understanding of issues experienced by people with disabilities (PwD); muster support for safeguarding the rights, dignity, and well-being of PwD; and promote the integration and inclusion of PwD in all aspects of society.

Australian IDPwD events were hosted by different levels of government, workplaces, schools and universities across the country. The unifying theme of IDPwD events is education of the general public through the voices of PwD. Education, via personal story telling, breaks down perceptions of difference and highlights similarities and shared experiences, thereby humanising PwD in the eyes of non-disabled people. This facilitates understanding and empathy of the daily plight of PwD – assisting the non-disabled population to ‘walk in our shoes’ and comprehend the lives and experiences of PwD.

What is disability? In Australian society, we recognise that disability can be visible or invisible/non-obvious, and includes physical, intellectual, psychiatric, sensory and neurological disabilities. Disability, defined in this context, is a significant oversimplification, relying on the divergence of an individual’s physical or mental state from what is regarded as ‘the norm’ and is commonly referred to as the medical model of disability. While this model of disability is relevant when accessing treatment/therapy from health practitioners, it does not address that it is the interaction with environmental and attitudinal barriers within society that impede PwDs’ full participation, on an equal basis with others, within society.

The biopsychosocial model of disability was developed in the late 1970s to explain the medical conditions and disablement of individuals by more than just biological factors, but by a combination of biological, psychological and social factors. While there are many models of disability, the biopsychosocial model provides a relatively simple, unifying model that incorporates the experiences of PwD, the social barriers (environmental and attitudinal) they encounter, and the psychological impact on individuals of their internal relationship with disability and the impacts of overcoming social barriers. In short, the ‘bio’ part of the biopsychosocial model of disability covers people’s physiological experiences, such as impairment effects like pain; the ‘psycho’ part covers psychological experiences, such as internalised oppression; and ‘social’ covers factors both environmental and attitudinal within the social environment, such as stairs.

Internalised oppression is a form of psycho-emotional disablism that occurs from the relationship a PwD has with themselves. Because people within society are conditioned to view disability as a negative, PwD can view their own disabilities as a negative part of themselves, and can physiologically oppress themselves when they view themselves as lesser; it is more likely to affect those who acquire disability later in life because these people are faced with negative representations, preconceived ideas, or stereotypes, of disability, which they held before acquiring disability.

When considering inclusion of PwD, it is important to consider where we are now in achieving an equitable world. The United Nations Convention on the Rights of Persons with Disabilities (UNCRPD) came into effect in 2008, prior to which disability consideration within international human rights instruments was significantly lacking. The UN Convention on the Elimination of All Forms of Discrimination against Women was adopted in 1979, and 43 years later we are still struggling to achieve gender equity. It is 14 years since the UNCRPD came into effect; hence, many advances are yet to be implemented to improve the lives, circumstances and inclusion of PwD and the accompanying knowledge base within disability studies.

Most RACI members will have limited control or influence over the physical environment in their workplaces or places of study. We are not architects or builders who can fix inaccessible steps. Don’t let this phase you; as discussed above, the social experiences of PwD, such as the attitudes or misconceptions PwD encounter, affect the level of exclusion and degree of inclusion experienced by PwD within society. Disability awareness and understanding is not about knowing every medical condition or type of disability; it is about developing a sense of awareness of the physical and social environment where you start to recognise barriers.

My top tips to increase inclusion of PwD are:

R&D investment in assistive technology predictive typing software for PwD in the early 1990s led initially to predictive text features on 1990–2010s ‘brick’ phones and was further adapted and developed into voice typing and voice-activated digital technology platforms, such as Siri and Alexa, that are widely used today. Today’s R&D, focused on overcoming issues for PwD, will feed into the widescale, marketable consumer products of 30 years’ time. Moving into research in materials chemistry, I hope to be a conduit for more efficient and affordable assistive technology while providing a socially nuanced, disability lens to the application of our research.

Tim Harte GAICD is a member of the RACI Inclusion and Diversity Committee, an Honours student at Deakin University, and the Victorian State Director for Physical Disability Australia, a national peak Disabled People’s Organisation. 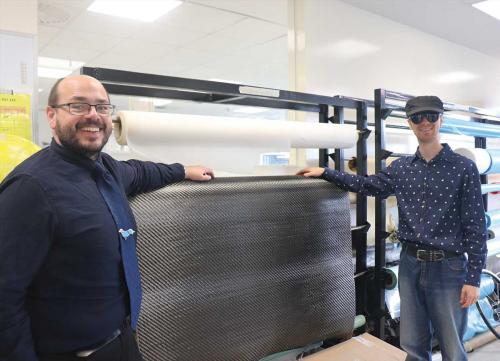 Disability awareness and understanding is not about knowing every medical condition or type of disability; it is about developing a sense of awareness of the physical and social environment where you start to recognise barriers.