Our dependence on certain chemical elements is becoming abundantly clear as they become scarce or run out.

The elements of the periodic table are universal and technically inexhaustible, but our ability to obtain many of them is not. Some elements can and should be considered finite resources because acquiring them in sufficient quantity and purity in the near future will become increasingly difficult, as we deplete natural reserves.

A critical element facing exhaustion is phosphorus, even though it is widespread in the environment, an integral part of every living organism and the 11th most common element on Earth. Phosphorus-rich ores are formed as part of Earth’s phosphorus cycle, which, unlike the carbon and oxygen cycles, is very limited. This is because phosphorus is not present within the atmosphere and the concentration of inorganic phosphorus is generally very low on land, due to orthophosphates being water soluble. This means phosphorus-rich ores form in very limited situations on the ocean floor from phosphorus precipitation. As such, millions of years of geological activity are required to transport the ore from the bottom of the ocean back to the land.

Hence, phosphorus-rich deposits are rare. They are mainly associated with the mineral fluoroapatite, predominantly found in Morocco and Russia. Phosphorus is extracted from these minerals and converted into phosphoric acid, for use as fertiliser for agricultural crops. So prevalent is the need for phosphorus fertilisers that an estimated 90% of global food supplies will be affected by a phosphorus shortage.

In 2008, global fertiliser prices increased by 600%, affecting food prices throughout Europe, Africa, Asia and the Americas, in part because of the concern about phosphorus shortage. This was driven by the belief that the world would reach ‘peak phosphorus’ in 2010. Peak phosphorus is analogous to peak oil, the concept that production rate of a resource has passed the discovery rate, which is considered an indication of terminal decline. This fear was alleviated when the United States Geological Survey increased their estimates of global phosphorus resources in the following year. However, current consumption rates are predicted to use up global phosphorus reserves in 80 years, and if agricultural output increases to meet expected world population growth, then depletion will be more rapid.

The world has faced a phosphorus shortage in the past. Before the middle of the 20th century, almost all phosphorus was obtained by mining guano (accumulated excrement of seabirds). European demand for phosphorus fertilisers stripped islands in the South Atlantic and Pacific of their guano, leading to a critical shortage. Evidence of this demand for guano can be seen today in Nauru, where the interior of the island has been stripped to barren limestone, left over from phosphorus mining. The shortage of guano in the early 20th century impacted on food prices, and alternative phosphorus sources were sourced, leading to today’s dependence on phosphorus mineral deposits.

Attempts continue to source alternative phosphorus resources. One approach has been to return to the phosphorus cycle and essentially mine the element from manure and excrement. Animals excrete almost 100% of the phosphorus they consume and hence manure can be a continual rich source of phosphorus. This is not a new concept, but what is new is the potential scale of the process and its industrialisation, with global livestock and municipal sewage having potential as new phosphorus reserves. Already, small-scale plants are undertaking phosphorus manure recovery in Canada.

Another finite element is selenium, which is an essential element for humans and is added to commercial fertilisers in small quantities to be taken up by plants to enter our diet. Selenium is considered a finite element because it is not mined exclusively – no major deposits of the element exist. Selenium is a by-product of copper mining, associated with electrolytic refining of copper ore. Hence, global supplies of selenium are dependent on copper mining outputs, with a reduction in copper demand leading to reduced amounts of selenium being supplied to the market, irrespective of selenium demand. Selenium is also used in the electronic industry for its semiconductor properties, and this application now competes with the fertiliser industry, so that selenium demand is beginning to outstrip supply.

This dependence on major metal mining is why indium, gallium and antimony are also facing scarcity. Indium and gallium are used for their low-melting-point alloys, which are critical in a range of industries, such as electronics and photovoltaics. Antimony is mainly used in the form of Sb2O3 as a flame retardant, which is found in aircraft, automobiles and clothing. All three elements are produced exclusively as by-products of the processing of other metals. As with selenium, no minerals exist that have these elements in sufficient quantity and concentration to be mined solely for them. Indium is the by-product of zinc and lead smelting. Gallium is the by-product of bauxite processing to alumina for aluminium, and antimony is recovered from copper, lead, silver and gold ore processing, where it is present at around 0.5 ppm.

The dependence of selenium, indium, gallium and antimony on the production of other ores means that supply can be significantly curtailed during downturns in demand for the source ores. Indium is a good example of this, with zinc and lead smelting expected to remain relatively constant into the near future, in part because manufacturing industries are moving away from steels to composite materials. This has meant global indium supply has not changed and it is anticipated that ‘peak indium’ will be reached within 10 years. Similar timeframes have also been suggested for selenium and gallium, while antimony demand will overshoot supply in 15 years. When these events occur, the resulting shortage will significantly drive up prices for these metals. This is anticipated to make mining and processing these elements exclusively attractive; however, the scarcity of mineral ores with these elements in sufficient concentration to be mined, will mean the price will be astronomical.

Rare earth elements, which are the lanthanide series with yttrium and scandium, are often considered to be finite, because of their name. However, the majority of these elements are actually common. The issue is that they are not found in sufficient quantity to be extracted economically, and until 20 years ago there was very little demand for them. This has changed with the development of the electronics industry; rare earths are now indispensable in modern technology. Yttrium is used in colour televisions, fuel cells and LEDs; similarly for europium. Dysprosium, neodymium and terbium are essential for micro-magnets and electronics used in computers and mobile phones, while cerium and lanthanum are required for catalysts.

Rare earths are currently in a ‘structural scarcity’, where production has been restricted by a lack of investment. This is because China currently produces more than 90% of rare earths and, in the case of dysprosium and terbium supply, 100% of global demand. The growing need for these elements and Chinese export restrictions have led to critical shortages, but new mining operations in Australia, USA and elsewhere will address these shortages in the coming decades. There have been creative ventures to address this shortage on shorter timeframes, such as the mining of e-waste to recover these elements from mobile phones. This recycling effort is cost-effective in part because the rare earth elements are in a more concentrated and refined form within e-waste materials than in the original ore body. This recycling of e-waste will become a significant industry, because neodymium demand is expected to grow by 700% over the next 20 years and dysprosium by 2600%. The only way to meet this demand will be by recycling.

Some organisations estimate that global silver reserves will be exhausted by 2029, claiming ‘peak silver’ has already been reached. It is true that demand for silver has increased in the past decade – with the highest electrical and thermal conductivity of any metal, silver has come to play a significant role in a range of electronic applications, from mobile phones to the latest televisions. However, global silver demand is around 17 000 tonnes per year, with global reserves conservatively estimated at 1 million tonnes. The argument put forward for peak silver is that new silver mines are not being constructed; however, only a quarter of the world’s silver demand comes from mining silver exclusively. The majority of mined silver is associated with gold, zinc and copper mining, and there is a huge global silver reclamation industry, recovering about 10 000 tonnes of silver per year from

Arsenic is the oddity for a finite element, because there are global efforts to remove the need for this element, rather than a shortage in nature. Arsenic was widely used for pesticides and insecticides as well as wood preservatives and of course rat poison, roles it was very effective in because of its ability to disrupt biological enzymes. However, the accumulation of arsenic in the environment and the corresponding health implications has meant alternative chemicals have been found for all of these applications. This, compounded with the negative view of arsenic, has meant a significant reduction in the demand for the element. As such, arsenic is no longer mined and what is available today is the by-product of tin, gold, silver and copper mining. This is mainly used in niche electronic applications, which is only a small market that will eventually be phased out. It is expected that arsenic demand will be essentially zero by the middle of the century, but arsenic contamination from waste will linger in the environment for centuries to come.

No element will ever disappear, but mining of their concentrated sources will severely deplete them. This will drive us to seek alternative and less concentrated reserves to maintain our standard of living, increasing the associated economic and environmental costs and imposing an additional ecological burden.

Colin A. Scholes FRACI CChem is a senior lecturer in the Department of Chemical Engineering at the University of Melbourne. He is a world-recognised researcher in the clean energy field and a passionate science communicator. 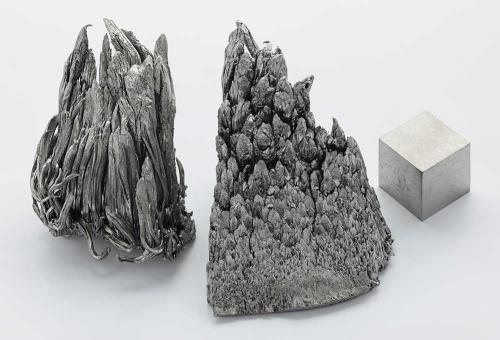 High-purity yttrium, sublimed-dendritic, and a 1 cm cube for comparison. 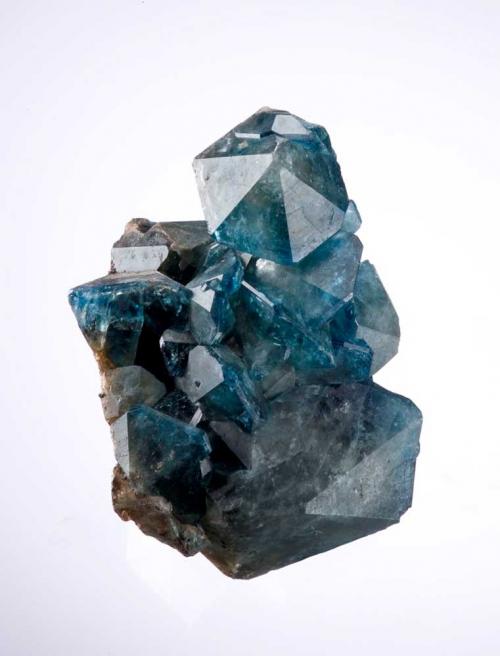 Phosphorus is extracted from fluoroapatite and converted to phosphoric acid, for use in fertiliser. 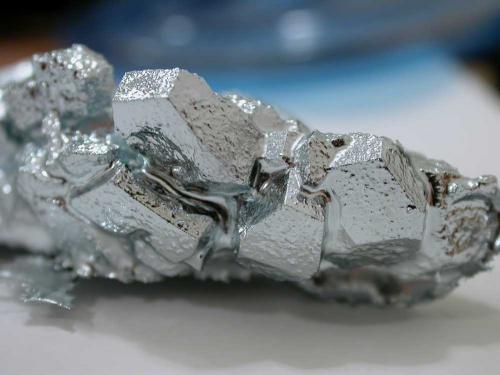 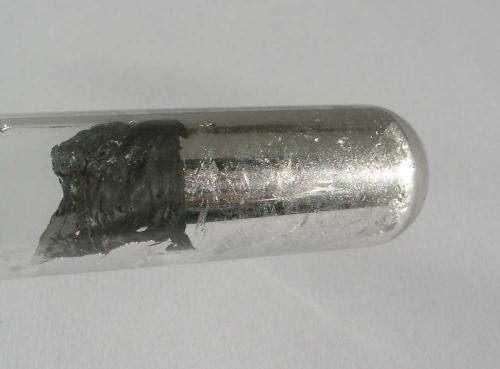 Indium is a by-product of zinc and lead smelting. 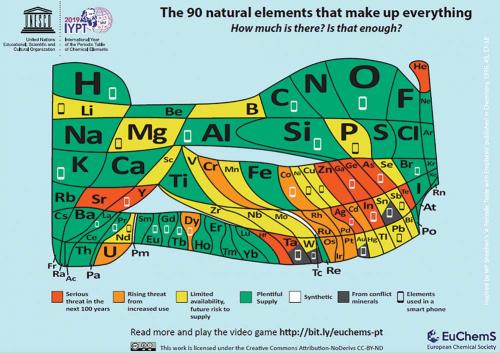 The European Chemical Society has produced this version of the periodic table to raise awareness of, and promote reflection and action on, element scarcity.