From chlorine to sarin: chemical weapons, past and present

Ongoing conflict in Syria has returned the weaponisation of chemicals to maim and kill military combatants and civilians to the public consciousness.

The incidents of chemical weapons use in Syria, as part of the ongoing civil war, have globally demonstrated the tragedy these weapons can inflict. Conversely, the award of the 2013 Nobel Peace Prize to the Organisation for the Prohibition of Chemical Weapons (OPCW) has demonstrated efforts and success in reducing and in some cases eliminating weapons stockpiles.

The origins of chemical weapons go back 160 years to the British forces in the Crimean War and the Union forces in the American Civil War. Artillery shells were filled with chlorine gas (a pulmonary agent) and fired into the opposition lines, though in only limited instances. The full weaponisation of chemicals occurred during World War I, where all sides used a range of agents to inflict heavy casualties. Chlorine gas was used throughout the conflict. In the beginning, chlorine gas attacks had devastating consequences, most notable in the second battle of Ypres, because gas masks and protective equipment had yet to be widely distributed. However, its effectiveness over the period of the war became limited because of its visibility to soldiers as a pale green mist, which provided time for soldiers to take countermeasures.

The declining effectiveness of chlorine gas led to the use of phosgene (COCl2) as a weapon, given it is colourless. Exposure to phosgene causes severe chemical burns to the skin and eyes, and impedes a soldier’s ability to breathe. Death is caused by suffocation due to a build-up of fluid in the lungs. Phosgene was so effective that it has been attributed to 85% of deaths due to chemical weapons during World War I, and the eerie outcome of an attack has been brilliantly captured in Erich Maria Remarque’s 1929 novel, All quiet on the Western Front.

The tragedy of both of these chemicals is that neither was developed for military purposes – chlorine gas has been known to chemists since Sir Humphry Davy reported it in 1810, while phosgene was developed as a precursor for a range of chemical syntheses.

World War I is often associated with mustard gas, also known as sulfur mustard and by its proper name 1-chloro-2-((2-chloroethyl)sulfanyl)­ethane. It was named because in its impure weaponised form the gas is yellow-brown with an odour resembling mustard and garlic. Mustard gas is a blistering agent because its absorption into the body through the lungs, eyes and skin causes severe chemical burns and thus large blisters form across the body. The macabre purpose of sulfur mustard was to incapacitate soldiers, as well as overload an opponent’s medical facilities in treating both military and civilian casualties.

Sulfur mustard was first synthesised almost a century before World War I, but its hazardous nature was only established in 1913, when English biochemist Hans Clarke, while working with German chemist Emil Fischer, was hospitalised after being exposed to a concentrated form in the laboratory in Berlin.

The use of mustard gas in warfare represented a change in weaponisation of chemicals compared to chlorine and phosgene. Sulfur mustard as a vapour cannot be readily dispersed, and hence to increase the effectiveness it was delivered as an aerosol, in which the sulfur mustard is contained within a fine solvent drop. This dramatically increased the distribution area of an attack and led the way for other non-gaseous chemical agents to become weaponised. The stability of sulfur mustard also meant the active agent could persist in the soil and water of contested areas for extended periods of time, and hence have continual impact on soldiers and military personnel long after the initial attack had ceased.

Aerosol distribution has been used to deliver other chemical weapons, for example those classed as blood agents. These are based on cyanogen chloride and arsine (AsH3) derivatives. On their own, these chemicals are too volatile to be weaponised in a gaseous form, and hence are delivered in an aerosol to ensure dispersion over a wide area and increased the probability of contact with enemy personnel. Blood agents enter the blood through contact within the lungs, where they react with haemoglobin, destroying red blood cells.

Again, both cyanate- and arsine-based chemicals were not originally developed for warfare; rather they were the product of inquisitive chemists in the preceding century, with arsine known since the late 18th century. Similarly, aerosols and the wide-scale land distribution of chemicals in aerosol form had initial application in the agricultural industry (September 2014 issue, p. 20). This highlights the insidious nature of chemical warfare – so much of the technology has been derived from the advancements chemists have made in other, more beneficial, fields of endeavour.

The Syria incidents have been attributed to sarin, a nerve agent. Nerve agents were specifically developed for warfare. Sarin (also given the code GB) was originally developed by Germany before and during World War II, and is classed in the G-series of nerve agent along with tabun (code GA), soman (GD) and cyclosarin (GF). These are so named because German scientists were the first to synthesise them. Other chemical weapons that Syria has stockpiled in preceding decades have been sulfur mustard and VX (another nerve agent). Stockpiles of these chemicals, including sarin, are currently being destroyed under a UN-sponsored agreement.

Sarin is based on (RS)-propan-2-yl methylphosphonofluoride, which inhibits the acetylcholinesterase enzyme in nerve cells, causing them to fire continually. This causes convulsions as well as involuntary urination and defecation because a person losses all muscle control. Death is almost always due to asphyxiation because of loss of respiratory muscle control – victims can no longer breathe. Nerve agents’ primary method of delivery is through the respiratory tract in the form of aerosols, but they can be absorbed through the skin, which means soldiers must don full chemical protective suits when under nerve agent attack. Sarin and other G-series agents have immediate effect on those exposed, as evident by the events in Syria; however, they do not persist in the environment.

The other nerve agents, V-series, do persist in the environment because they do not degrade or wash away easily, meaning they will remain on clothes and exposed surfaces for long periods of time. This enables a military to essentially poison terrain and disrupt the movement of enemy forces. Such chemical weapons are known as area denial weapons. The most dangerous of the V-series is VX, short for ‘venomous agent’ and known to chemists as ethyl ((2-(bis(propan-2-yl)amino)ethyl)sulfanyl)(methyl)­phosphinate. VX is 10 times more toxic than sarin, and is odourless and tasteless, with exposure possible through skin and eyes and by inhaling. The only military use of VX has been alleged in the Halabja chemical attack by Iraq against Kurds in 1988, with traces of VX found on armaments. However, recently VX has been attributed to the alleged assassination of Kim Jong-nam (brother of North Korean leader Kim Jong-un), in Malaysia in February 2017.

All of the previously mentioned chemical agents are considered weapons of mass destruction, and their use, production and stockpiling is outlawed under the Chemical Weapons Convention. However, some chemical agents are used legally to inflict injury on people. These are incapacitating agents (identified as Schedule 2 substances under the Convention). The most common is tear gas, used by police and military forces worldwide to control riots and disperse crowds. The official name is CS gas, and it is a controlled substance under the Chemical Weapons Convention, meaning it can be produced, stockpiled and used by government agencies in a controlled manner. The active ingredient is 2-chlorobenzalmalononitrile, which causes strong irritation to the nose, mouth and throat as well as tearing in the eyes, hence its name. The victim’s response is dependent on the amount of exposure, but it is generally severe enough to result in the victim needing to keep their eyes closed and hence become disoriented.

Pepper spray, another incapacitating agent, is based on capsaicin, which causes irritation to the eyes, leading to pain, tears and temporary blindness. Not considered a controlled substance, it is found in a range of personal protective sprays and animal repellants. Pepper spray is often called Mace; however, Chemical Mace, also known as CN gas, is based on an aerosol of phenacyl chloride. This is a much stronger incapacitating agent than capsaicin and tear gas, though with increased toxicity.

An older incapacitating agent that has gone out of favour was known as firegas, also called CR gas, which is based on dibenzoxazepine, and which is 10 times more powerful than tear gas. Exposure leads to immediate incapacitation because of intense irritation to the eyes, throat and skin; but it can be lethal in enclosed spaces because of its increased toxicity.

A more devious incapacitating agent is known by the stylised name of Agent 15, BZ, Buzz, or in Russia as Substance 78. This is an aerosol of 3-quinuclidinyl benzilate, which results in confusion and stupor response, rather than an irritation response. The chemical agent can also result in hallucinations in victims, sometimes causing them to disrobe because of the confusion. It was originally developed for treating gastrointestinal ailments but was found more suitable by the US military as a chemical warfare agent through their research into psychoactive incapacitating agents. This is another example of fundamental chemistry research being appropriated for military purposes.

The development of chemical agents for warfare represents a horrendous pursuit of the chemistry field and the appropriation of discoveries made for more benign applications a travesty of chemistry research. The activities of the Organisation for the Prohibition of Chemical Weapons must be continually supported and strong international responses must be made to investigate alleged and proven chemical weapons incidents.

Colin Scholes FRACI CChem is a lecturer in the Department of Chemical Engineering at the University of Melbourne. A partner article about protection in and prevention of chemical warfare will be published in a forthcoming issue of Chemistry in Australia. 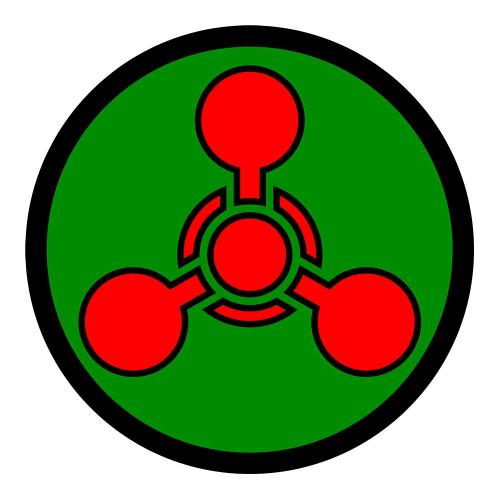 US Army symbol for chemical weapons. 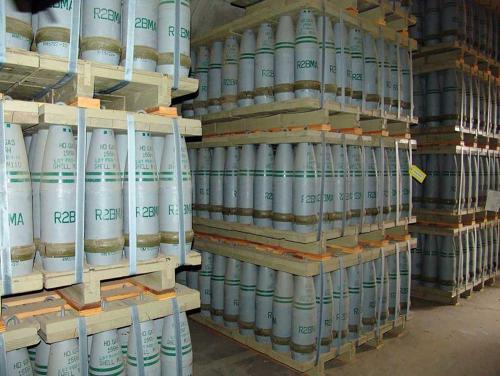 Pallets of 155-millimetre artillery shells containing mustard gas at Pueblo chemical weapons storage facility in Colorado, USA. The USA has been steadily destroying its entire stockpile of chemical weapons and will continue to do so until none remain. 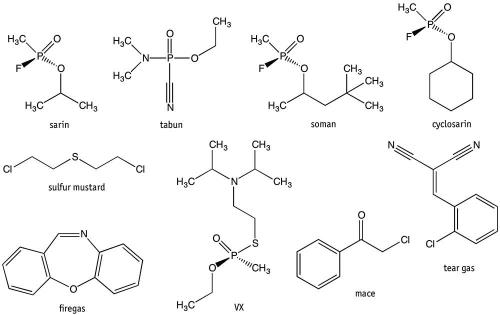 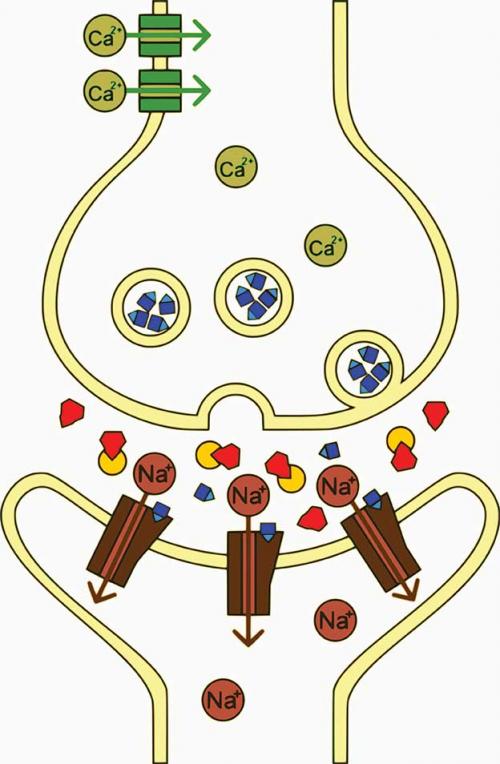 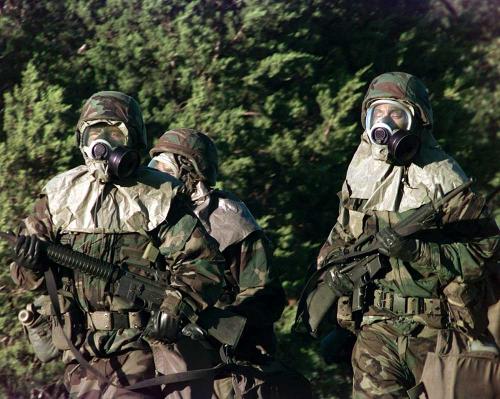 The macabre purpose of sulfur mustard was to incapacitate soldiers, as well as overload an opponent’s medical facilities ...

The Syria incidents have been attributed to sarin, a nerve agent. Nerve agents were specifically developed for warfare.