High and dry: priorities for our water insecurity

For the driest inhabited continent on the planet, water security is a pressing concern.

The writing is on the wall, in letters several metres high: Australia is terribly vulnerable.

Safe, secure supplies of water are a critical part of this problem.Non-profit NGO The Nature Conservancy put the water security issue succinctly in their 2019 report Wellspring: source water resilience and climate adaptation: ‘The climate crisis is a water crisis. Nine-in-ten natural disasters are water-related … too much water and increasing extremes go hand in hand with far too little water; periods of drought align with flows of refugees and conflicts.’

As noted by the Bureau of Meteorology in its Water in Australia 2018–19 report: ‘The health of our communities, industries and natural environments is dependent on secure water supplies’. Water security can therefore be predicted to be a major issue for Australia in years to come, particularly as the effects of climate change continue to worsen.

Australia’s water security is part of a broader landscape of vulnerability. Our lack of local production and capacity, our reliance on imported goods and on exports that are either unimproved (mining and other primary production) or politically vulnerable (education and tourism), or both, leaves us at risk to any interruption in global trade.

One of the many people who have been trying to warn us is former Air Force deputy chief John Blackburn: ‘Almost all our trade – 98 per cent of our trade, imports and exports – depends upon foreign-owned shipping systems, so we are actually in a pretty fragile position’, he said as part of an ABC news article in April (ab.co/334aKW6).

Describing a modelling exercise conducted at the workshop, she said: ‘We saw three main possibilities of [a global crisis] happening: the increasing and escalating effects of climate change and natural disasters; a global power conflict, probably between America and China; and finally a pandemic – one with a much greater death rate than what we’re seeing with the COVID crisis’.

These outcomes are alarming. With Australia almost entirely dependent on imports for most specialist medicines, shortages were predicted immediately following a major interruption of global supply chains. Public and industrial hoarding were similarly predicted to occur in the first days of a crisis.

Critically, water treatment systems – and therefore our supply of clean, safe drinking water – were predicted to begin to fail after just one week, such is our reliance on imported chemicals in the water treatment sector. Within two weeks, mass lay-offs, cessation of export mining operations, and the first interruptions to the supply of goods and services would happen. Within a month, with shortages of liquid fuel, food supplies would also begin to run out. And you don’t even want to know what was predicted within three months.

With the COVID-19 crisis, we’ve seen the first hint that many of these predictions could become realities. Being a less severe pandemic than posited for the exercise, the disruptions we’ve experienced are less complete or disastrous than those modelled by Engineers Australia, but the effects have still been severe. At the time of writing, we are enduring the pandemic’s ‘second wave’, with no real sense of how long our society and economy will take to recover.

The crises modelled by Engineers Australia and the Department of Defence can be separated into two groups – those, such as war and pandemic, that would likely happen suddenly, but (hopefully) avoidably; and those, such as climate change, which will take longer to manifest, but (unless some global epiphany should occur) are now pretty much inevitable.

Our primary source of water is rainfall. However, according to the Bureau of Meteorology: ‘High year-to-year variability in rainfall and increasing demand for water resources presents unique challenges for water management in Australia’. And Australia’s total annual rainfall in 2018–19 was the lowest in almost 50 years.

To preserve our rainfall, we need storage. Australia has more than 500 major and thousands of small storages, plus more than two million farm dams. But with drought conditions, accessible storage volume decreased during 2018–19 from 63% to just 46%, the lowest figure in a decade.

Major storage can also be used for electricity generation, but storage has environmental drawbacks, and the release of ‘natural’ flows is vital for many river ecosystems.

When storage falls short, Australia turns to desalination by reverse osmosis. Perth was first in Australia with its Kwinana plant. Sydney has Kurnell, and new plants have been built in South Gippsland (Victoria), Adelaide and the Gold Coast, in addition to more than 260 small facilities nationally. The five major urban centres in Australia have a total seawater desalination capacity of 534 GL/year.

But this isn’t a ‘flick the switch’ arrangement when drought hits. After several years on care and maintenance, Kurnell’s restart was initiated at the end of January 2019 (when dam levels hit 60%), with an eight-month restart period – delivering first water in March 2019 and reaching operational capacity by the end of September.

The traditional process of desalination is pretty straightforward. Filtered seawater is forced under high pressure through a semipermeable membrane. The smaller water molecules pass through, while the larger salt ‘molecules’ are trapped. The source side ends up as highly saline brine, which has waste problems, even with ocean disposal. It can affect marine life through altered local salinity, higher temperature and severely reduced levels of dissolved oxygen.

Care needs to be taken to minimise the number of fish sucked in. The Kurnell plant keeps intake linear flow rate at <0.1 m/s, with an interesting video showing fish swimming comfortably around those flows (www.sydneydesal.com.au/how-we-do-it/infrastructure).

The fresh water output from desalination must be further treated – vital minerals are reintroduced, the water is chlorinated for disinfection, and fluorinated for dental hygiene. This means that our desalination capacity is equally vulnerable to the interruption of supply in vital chemicals as our drinking water storage. In the wake of COVID, it has been reported that many water treatment plants have expanded their stockpiles of treatment chemicals, but generally this has been from two to four weeks’ supply.

As newer plants, desalination plants are also more vulnerable to cyber attack. Ironically, our main infrastructure is comparatively safe from cyber attack owing to its ageing status and lack of investment in modernisation.

This might be an opportunity for new technology enhancements to reverse osmosis. Various researchers have been developing alternatives based on the use of graphene. CSIRO’s GraphAir process creates a film with microscopic nano-channels, using renewable soybean oil, claimed as a faster, cheaper and more environmentally friendly production process for graphene. CSIRO claims it is so effective that Sydney Harbour water passed through in ready-to-drink form, and that it increased antifouling membrane life significantly.

And this coating of existing membranes is an idea being pursued around the world, with recent papers published from the University of Manchester and Wuhan University, both on similar principles. Graphene is very strong. It can form regular sheets just one atom thick, with nanometre-sized pores. It is hard to achieve mechanical strength in isolation, because any defects in the lattice weaken the structure, but when coated onto an existing membrane it combines the properties for both performance and endurance.

The other major alternative to produce potable water in Australia is water recycling, primarily through the treatment of sewage flows. This represents about 7% of the total water sourced in major urban centres, and the Bureau of Meteorology predicts that usage will grow as dual-pipe systems are installed in metropolitan growth corridors. However, there has been considerable consumer resistance to the use of this water for drinking purposes, so the 124 GL of recycled water produced in 2018–19 was used for irrigation, industrial and non-potable domestic uses, and groundwater recharge. This helps bolster supply, but it fails to solve the fundamental vulnerabilities in our infrastructure.

Overall, if there is any positive that might come from the current COVID crisis, it might be hoped that our government, our industry and our society will be forced to sit up and take notice about just how fragile our systems are. Maybe, just maybe, we’ll find the will to re-focus on our strategic needs and the major shortfalls in our capacity. 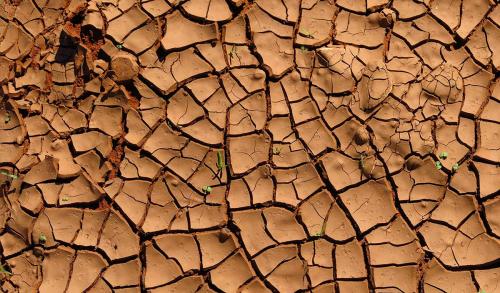 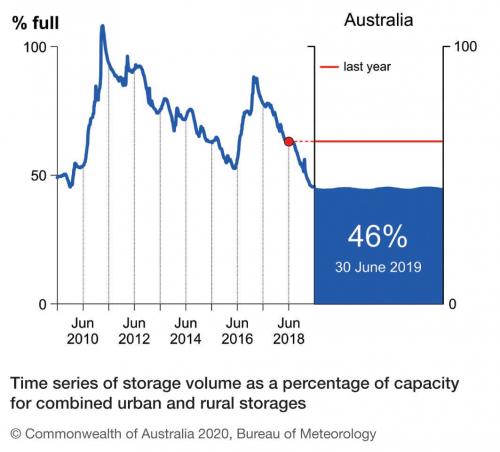 Time series of storage volume as a percentage of capacity for combined urban and rural storages. © Commonwealth of Australia 2020, Bureau of Meteorology 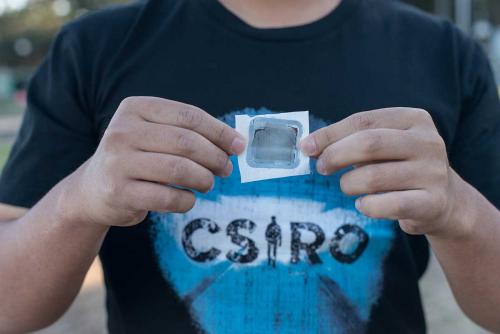 ... with drought conditions, accessible storage volume decreased during 2018–19 from 63% to just 46%, the lowest figure in a decade.

CSIRO claims it is so effective that Sydney Harbour water passed through in ready-to-drink form, and that it increased antifouling membrane life significantly.