The RACI celebrated its 100th birthday at the Centenary Congress in Melbourne, 23–28 July 2017. The conference was an outstanding success, and right from the outset I would like to thank the CEO of the RACI, Roger Stapleford for his inexhaustible contributions. Roger oversaw much of the logistics of this congress, and, as one could imagine, the organisational aspects were enormous. There were many other contributors to this congress, the Chair Professor Mark Buntine, the Chairs of the respective conferences and divisions that contributed to the congress, the RACI office staff, the staff of the PCO, ICMS Australasia, the staff at the Melbourne Convention Centre and of course the delegates who contributed to all aspects of making sure the conference was intellectually stimulating, and socially excellent. No doubt I have left someone out of these acknowledgements, and I apologise, but the size of the Congress meant this will always happen. The amount of networking taking place was overwhelming, with formal and informal meetings being held simultaneously throughout the Convention Centre and, needless to say, bars and restaurants nearby.

This was easily the biggest chemistry conference organised in Australia, being well in excess of double anything previously. The numbers elaborate on the size of the Congress (see box).

As part of the 100th celebration, a coffee table book covering highlights of the first 100 years of the RACI was launched. This book, RACI – a century of bonds, was compiled by Helmut Hügel, but had considerable contributions from many others throughout the RACI. The book is an excellent overview of the first 100 years of the RACI and has snippets of research, education, timelines etc. If you would like to acquire a book, please contact the RACI (see p. 35).

I have attended many more focused conferences in Australia, but this broad congress brought many people together who I have not run into for years, old friends from PhD days, work colleagues from years ago, and many ex-students whom I haven’t seen for some time. Conferences are for learning new chemistry and forming networks, but also for the social stimulation of catching up with old friends, and on this basis, it was an incredible success. I only wish I would be around in 2117 for RACI Congress 200. 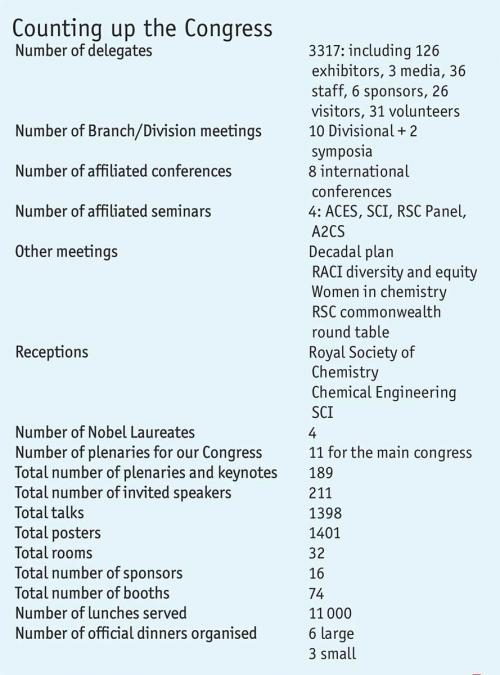 This was easily the biggest chemistry conference organised in Australia, being well in excess of double anything previously.