By Centre for Advanced Molecular Imaging

Good things come in small packages – and metallic nanoparticles are some of the smallest. Although their dimensions are measured in nanometres, with each nanometre being one-millionth of a millimetre, scientists believe that these tiny particles could be used to fight cancer, collect renewable energy and mitigate pollution. The problem is that it is difficult to know how they work, since they are so small that their structure is impossible to see.

Until now, that is. An international team featuring contributors from leading institutions in the US and Korea and co-led by an Imaging CoE scientist has recently discovered a solution to this problem. Their discoveries will allow researchers to investigate the 3D structure of these miniscule particles for the first time.

In a paper published in Science (doi: 10.1126/science.aab1343), Monash Associate Professor Hans Elmlund and collaborators from Princeton, Berkeley and Harvard reveal the details of a novel imaging method and show how it can be used to characterise the 3D structures of platinum nanoparticles.

The new method, which is called 3D Structure Identification of Nanoparticles by Graphene Liquid Cell EM (SINGLE), exceeds previous techniques by combining three recently developed components. The first is the graphene liquid cell, a bag one molecule thick that can hold liquid inside it without obscuring it from the electron microscope. The second is the direct electron detector, which is even more sensitive than traditional camera film and can be used to capture movies of the nanoparticles as they spin around in solution. Finally, a 3D modelling approach known as PRIME allows the scientists to use the movies to create 3D computer models of individual nanoparticles.

Although platinum nanocrystals have many different applications, they are mostly based on one attribute of the material: it is an excellent catalyst. This is part of the reason that Elmlund and his colleagues chose to work with platinum nanocrystals in particular; the detailed atomic structure of each particle determines, to a large degree, how effective it is as a catalyst.

The differences in structure between individual nanocrystals are pronounced, because the crystals are created by aggregation. They are effectively built up atom by atom, leading to highly complex and unpredictable structures that could not be determined – until now.

In their new article, Elmlund and his collaborators demonstrate the power of their innovative system by describing in detail the structure of two platinum nanoparticles, which were also captured in the movie clips that accompany the publication. ‘It was very exciting, because seeing the movie I knew that there was a possibility that we could extract 3D information from the image series’, said Elmlund.

But the value of the paper extends beyond the demonstration of a novel method. Because the platinum nanoparticles described have never been seen in such detail before, at the level of individual atoms, Elmlund and his colleagues got the opportunity to draw new conclusions about how these highly useful particles grow – and their discoveries have surprised the scientific community.

‘I think everybody in the field had anticipated cubical or at least highly symmetrical platinum nanocrystals’, said Elmlund. ‘It was surprising to learn that they form asymmetrical multi-domain structures.’

For the imaging scientists involved, next steps will include investigating the formation and evolution of nanoparticles and characterising the transitions they go through to reach their final form. ‘It is important for us to understand this, so that we can design new materials, for example, to build better or more efficient solar cells, or make better and more economical use of fossil fuels’, said Elmlund. Their new method will undoubtedly help them to shed new light on these areas, and may lead to further revelations; after all, as Elmlund reflected, ‘Making discoveries is one of the great privileges of being a scientist.’

The new SINGLE method devised by Elmlund and his collaborators relies, in part, on the recently discovered wonder material graphene. First isolated in the laboratory in 2003, this strong but light substance has many intriguing properties.

Each sheet of graphene is only one atom thick, and is made up of carbon atoms with bonds linking them to three of their neighbours. Seen under a microscope, the atoms and their bonds form a honeycomb lattice that resembles chicken wire.

Most of graphene’s exciting properties are derived from these extraordinary proportions. For Elmlund’s purposes, what was required was a material envelope to hold a liquid as it was examined by a microscope. Graphene, being extremely thin and disproportionately strong, fit the bill perfectly. 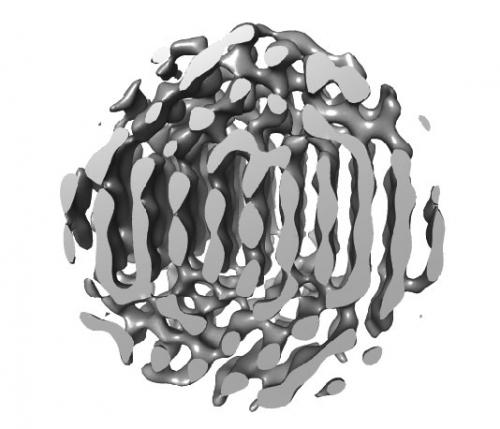 Slab through the 3D reconstruction of particle 1 along the vertical plane with tentative atomic positions indicated. ABC repeats of {111} planes are visible.