On Earth, chemical reactions occur naturally. However, the conditions necessary to create new chemical elements through nuclear fusion are only found in stars, either during their lives or when they die. Virtually all elements on Earth heavier than boron were made in stars over 4.6 billion years ago, before the Sun and the planets formed.

I work in the field of explosive nucleosynthesis: I study how heavy elements are created in supernova explosions, when thermonuclear fusion turns carbon and oxygen into heavier elements. I think about the synthesis of elements such as silicon, iron or nickel on an almost daily basis. It’s hard to make a choice, but when hard pressed about my favourite element, it would have to be the element with atomic number 25: manganese.

Manganese is monoisotopic – it has only one stable isotope, 55Mn. In and of itself that is nothing special, as it shares this property with 25 other elements. However, this means that when we see the element manganese, we know for sure which isotope it is. We can then use this information to learn more about the kind of stars that explode as thermonuclear supernovae.

Manganese is synthesised almost exclusively when its ‘radioactive grandparent’ 55Co decays. With a half-life of about 17.5 hours, 55Co decays to 55Fe, which in turn decays to 55Mn with a half-life of about 1000 days. However, not all 55Co will become manganese. The problem is that 55Co likes to capture a proton to turn into 56Ni. If this happens, then the 55Co is destroyed and no manganese is produced, as 56Ni eventually decays to stable 56Fe. Therefore, if we want copious amounts of manganese to be synthesised, we don’t want too many protons to be around after 55Co has been produced.

It turns out that there is a dividing line between producing a lot and very little manganese at a density of about 200 million times the density of water. If carbon and oxygen undergo thermonuclear fusion at a density greater than this, there will be very few protons around, and most of the 55Co produced is free to decay to produce manganese. Conversely, at lower densities than this, most of the 55Co will capture protons, turning into 56Ni, with little manganese produced.

To help solve this debate, my work has used the observed abundance of manganese relative to iron to conclude that approximately half of these supernovae arise from the incineration of very compact and dense white dwarf stars near the Chandrasekhar-limit, ~1.4 solar masses. So if you ever wondered where most of the approximately 12 milligrams of manganese in your body came from, now you know!

Ivo Rolf Seitenzahl is interested in how elements are created in nuclear fusion reactions when supernovae explode. He grew up in Germany, spent 10 years studying astrophysics in the USA, and eventually emigrated to Australia as a postdoctoral researcher. He is now an ARC Future Fellow at UNSW Canberra. When he isn’t studying stellar explosions, he raises plants, ducks and his three young children. 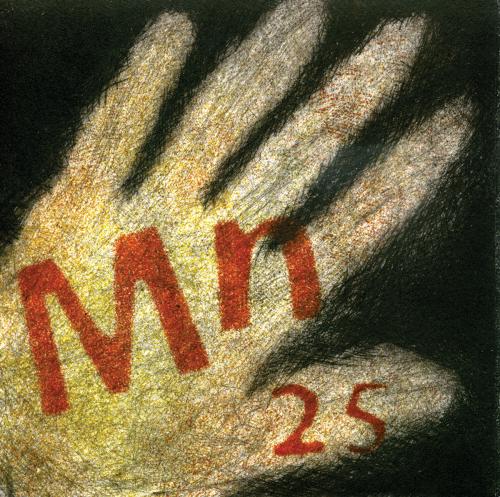