The 2019 Nobel Prize in Chemistry was awarded to John Goodenough, M. Stanley Whittingham and Akira Yoshino ‘for the development of lithium-ion batteries’ such as those used in electric cars and mobile phones. Read more about the science Nobel prizes in this issue.

Physics: new perspectives on our place in the universe

The 2019 Nobel Prize in Physics was awarded ‘for contributions to our understanding of the evolution of the universe and Earth’s place in the cosmos’, with one half to James Peebles ‘for theoretical discoveries in physical cosmology’ and the other half jointly to Michel Mayor and Didier Queloz ‘for the discovery of an exoplanet orbiting a solar-type star’.

This year’s Nobel Prize in Physics rewards new understanding of the universe’s structure and history, and the first discovery of a planet orbiting a solar-type star outside our solar system.

Peebles’ insights into physical cosmology have enriched the entire field of research and laid a foundation for the transformation of cosmology over the last 50  years, from speculation to science. His theoretical framework, developed since the mid-1960s, is the basis of our contemporary ideas about the universe.

The Big Bang model describes the universe from its very first moments, almost 14 billion years ago, when it was extremely hot and dense. Since then, the universe has been expanding, becoming larger and colder. Barely 400 000 years after the Big Bang, the universe became transparent and light rays were able to travel through space. Even today, this ancient radiation is all around us and, coded into it, many of the universe’s secrets are hiding. Using his theoretical tools and calculations, Peebles was able to interpret these traces from the infancy of the universe and discover new physical processes.

The results showed us a universe in which just 5% of its content is known, the matter that constitutes stars, planets, trees – and us. The rest, 95%, is unknown dark matter and dark energy. This is a mystery and a challenge to modern physics.

In October 1995, Mayor and Queloz announced the first discovery of a planet outside our solar system, an exoplanet, orbiting a solar-type star in our home galaxy, the Milky Way. At the Haute-Provence Observatory in southern France, using custom-made instruments, they were able to see planet 51 Pegasi b, a gaseous ball comparable with the solar system’s biggest gas giant, Jupiter.

This discovery started a revolution in astronomy and more than 4000 exoplanets have since been found in the Milky Way. Strange new worlds are still being discovered, with an incredible wealth of sizes, forms and orbits. They challenge our preconceived ideas about planetary systems and are forcing scientists to revise their theories of the physical processes behind the origins of planets. With numerous projects planned to start searching for exoplanets, we may eventually find an answer to the eternal question of whether other life is out there.

This year’s laureates have transformed our ideas about the cosmos. While Peebles’ theoretical discoveries contributed to our understanding of how the universe evolved after the Big Bang, Mayor and Queloz explored our cosmic neighbourhoods on the hunt for unknown planets. Their discoveries have forever changed our conceptions of the world.

The 2019 Nobel Prize in Physiology or Medicine was awarded jointly to William G. Kaelin Jr, Sir Peter J. Ratcliffe and Gregg L. Semenza ‘for their discoveries of how cells sense and adapt to oxygen availability’. They identified molecular machinery that regulates the activity of genes in response to varying levels of oxygen.

The seminal discoveries by this year’s Nobel laureates revealed the mechanism for one of life’s most essential adaptive processes. They established the basis for our understanding of how oxygen levels affect cellular metabolism and physiological function. Their discoveries have also paved the way for promising new strategies to fight anaemia, cancer and many other diseases.

During evolution, mechanisms developed to ensure a sufficient supply of oxygen to tissues and cells. The carotid body, adjacent to large blood vessels on both sides of the neck, contains specialised cells that sense the blood’s oxygen levels. In addition to the carotid body-controlled rapid adaptation to low oxygen levels (hypoxia), there are other fundamental physiological adaptations. A key physiological response to hypoxia is the rise in levels of the hormone erythropoietin (EPO), which leads to increased production of red blood cells (erythropoiesis). The importance of hormonal control of erythropoiesis was already known at the beginning of the 20th century, but how this process was itself controlled by O2 remained a mystery.

Semenza studied the EPO gene and how it is regulated by varying oxygen levels. By using gene-modified mice, specific DNA segments located next to the EPO gene were shown to mediate the response to hypoxia. Ratcliffe also studied O2-dependent regulation of the EPO gene, and both research groups found that the oxygen-sensing mechanism was present in virtually all tissues, not only in the kidney cells where EPO is normally produced. These were important findings showing that the mechanism was general and functional in many different cell types.

Semenza wished to identify the cellular components mediating this response. In cultured liver cells he discovered a protein complex that binds to the identified DNA segment in an oxygen-dependent manner. He called this complex the hypoxia-inducible factor (HIF). In 1995, Semenza was able to publish some of his key findings, including identification of the genes encoding HIF. HIF was found to consist of two different DNA-binding proteins, so called transcription factors, now named HIF-1α and ARNT. Now the researchers could begin to determine which additional components were involved and how the machinery works.

When oxygen levels are high, cells contain very little HIF-1α. However, when oxygen levels are low, the amount of HIF-1α increases so that it can bind to and thus regulate the EPO gene as well as other genes with HIF-binding DNA segments (see image). Several research groups showed that HIF-1α, which is normally rapidly degraded, is protected from degradation in hypoxia. At normal oxygen levels, a cellular machine called the proteasome, degrades HIF-1α. Under such conditions a small peptide, ubiquitin, is added to the HIF-1α protein. Ubiquitin functions as a tag for proteins destined for degradation in the proteasome. How ubiquitin binds to HIF-1α in an oxygen-dependent manner remained a central question.

At about the same time as Semenza and Ratcliffe were exploring the regulation of the EPO gene, cancer researcher Kaelin was researching an inherited syndrome, von Hippel-Lindau’s disease (VHL disease). This genetic disease leads to dramatically increased risk of certain cancers in families with inherited VHL mutations. Kaelin showed that the VHL gene encodes a protein that prevents the onset of cancer. Kaelin also showed that cancer cells lacking a functional VHL gene express abnormally high levels of hypoxia-regulated genes; but that when the VHL gene was reintroduced into cancer cells, normal levels were restored. This showed that VHL was somehow involved in controlling responses to hypoxia. Additional clues came from several research groups showing that VHL is part of a complex that labels proteins with ubiquitin, marking them for degradation in the proteasome. Ratcliffe and his research group then demonstrated that VHL can physically interact with HIF-1α and is required for its degradation at normal oxygen levels. This conclusively linked VHL to HIF-1α.

Both Kaelin and Ratcliffe suspected that the key to O2-sensing resided somewhere on a specific portion of the HIF-1α protein known to be important for VHL-dependent degradation. In 2001, in two simultaneously published articles they showed that under normal oxygen levels, hydroxyl groups are added at two specific positions in HIF-1α (see image). This protein modification, called prolyl hydroxylation, allows VHL to recognise and bind to HIF-1α and thus explained how normal oxygen levels control rapid HIF-1α degradation with the help of oxygen-sensitive enzymes (so-called prolyl hydroxylases). Further research by Ratcliffe and others identified the responsible prolyl hydroxylases. It was also shown that the gene-activating function of HIF-1α was regulated by oxygen-dependent hydroxylation. The Nobel laureates had now elucidated the oxygen sensing mechanism and had shown how it works.

The 2019 Nobel Prize in Chemistry was awarded to John Goodenough, M. Stanley Whittingham and Akira Yoshino ‘for the development of lithium-ion batteries’. These laureates and their work will be featured in Chemistry in Australia in early 2020.

William G. Kaelin, Jr was born in 1957 in New York. He obtained an MD from Duke University, USA. He did his specialist training in internal medicine and oncology at Johns Hopkins University, Baltimore, and at the Dana-Farber Cancer Institute, Boston. He established his own research lab at the Dana-Farber Cancer Institute and became a full professor at Harvard Medical School in 2002. He has been an investigator at the Howard Hughes Medical Institute since 1998.

Sir Peter J. Ratcliffe was born in 1954 in Lancashire, UK. He studied medicine at Gonville and Caius College at Cambridge University and did his specialist training in nephrology at Oxford. He established an independent research group at Oxford University and became a full professor in 1996. He is the Director of Clinical Research at the Francis Crick Institute, London, Director of the Target Discovery Institute in Oxford and a member of the Ludwig Institute for Cancer Research. 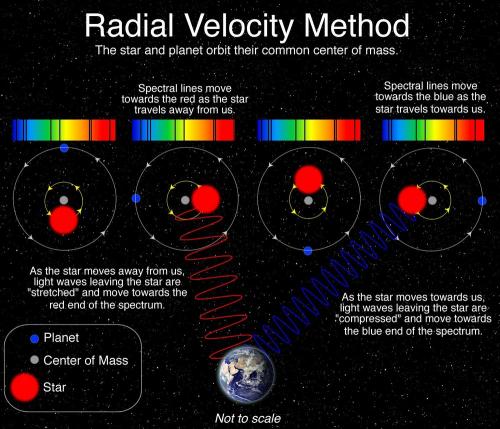 The principle of measuring radial velocity using the Doppler effect. The star and the orbiting planet move around their common centre of mass, causing Doppler shifts due to stellar wobble. Stellar absorption lines that arise when radiation from the interior passes the stellar atmosphere will be red- and blue-shifted depending on whether the star is moving away from or towards Earth. These Doppler shifts give information about the planet’s orbital period around the star and also set a lower mass limit. 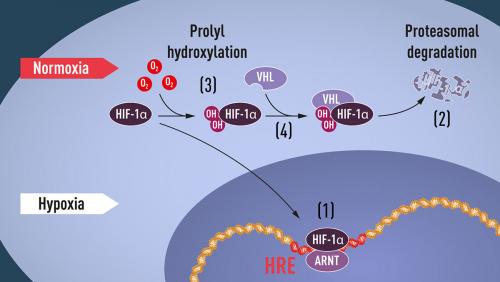 When oxygen levels are low (hypoxia), HIF-1α is protected from degradation and accumulates in the nucleus, where it associates with ARNT and binds to specific DNA sequences (HRE) in hypoxia-regulated genes (1). At normal oxygen levels, HIF-1α is rapidly degraded by the proteasome (2). Oxygen regulates the degradation process by the addition of hydroxyl groups (OH) to HIF-1α (3). The VHL protein can then recognise and form a complex with HIF-1α leading to its degradation in an oxygen-dependent manner (4).

This year’s Nobel Prize in Physics rewards new understanding of the universe’s structure and history, and the first discovery of a planet orbiting a solar-type star outside our solar system.