At the Australian Science Communicators’ Conference earlier this year, one of the most engaging and enthusiastic presentations was by Tilly Boleyn, Curator of the Science Gallery Melbourne (melbourne.sciencegallery.com).

Due to open later this year, Science Gallery Melbourne is part of the Melbourne Connect innovation precinct being developed by the University of Melbourne on the corner of Swanston and Gratton streets, just north of the CBD.

Science Gallery Melbourne is aimed at 15–25 year olds and Boleyn said that she wants to ‘challenge the traditional narrative about whose opinion matters, how to engage young people in important issues and what makes a transformational experience’. The results of her work with young people on the gallery’s Sci Curious Advisory Board to generate ideas, plan exhibitions, select works, promote the gallery and engage stakeholders seem to be doing just that.

The gallery is one of eight in the Science Gallery Network, with others in Dublin, London, Bengaluru, Venice, Detroit, Rotterdam and Atlanta. All are associated with universities, with the aim to ‘ignite creativity and discovery where science and art collide’. The new Melbourne building will include immersive exhibitions, learning spaces, and areas for workshopping and socialising. Blood, Perfection and Re-imagining Your Waste are programs that have already run as ‘pop-ups’ over the past three years.

A high-tech art commission is underway for the official opening, and to this end the gallery has put together a Collision Commission – a multidisciplinary team with expertise in such areas as performance, lasers, robotics and systems design – to work with Melbourne-based audiovisual artist Robin Fox.

Boleyn was clearly enthused about her work with the Sci Curious Advisory Board and strongly encouraged conference participants to consider having a mentor younger than 30.

It forces you, she said, to stop talking and start listening – resisting the urge to jump in with your own perspectives and to give advice. From the examples I saw in her presentation, the ideas emerging from the gallery’s young minds are exciting and unconventional.

To find out more about collaboration with Science Gallery, email research@melbourne.sciencegallery.com. 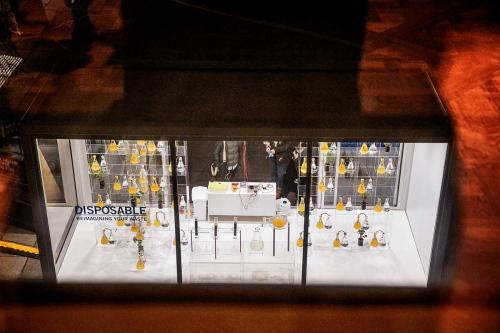 At the Urinotron, part of the Re-imagining Your Waste pop-up program, a large-scale battery powered by human urine was used to charge mobile phones.