Empowering women in the chemical sciences

In mid-February this year, breakfast was the order of the day, with 5000 women across more than 50 countries gathering at more than 200 breakfast events to take part in a special Global Women’s Networking Breakfast.

On 12 February 2019, women chemists from more than 50 countries shared breakfast. They were taking part in the international networking event Empowering Women in the Chemical Sciences, an activity to celebrate the centenary of the International Union of Pure and Applied Chemistry (IUPAC). Women have made enormous contributions to the advancement of chemistry over the past 100 years, including as winners of Nobel Prizes and many other major international awards, but they rarely take time to celebrate these achievements.

Worldwide, there were more than 200 breakfasts, with more than 5000 women involved, almost certainly making it the largest ‘virtual’ gathering of women chemists worldwide. The first events were held in New Zealand, with Wellington and Palmerston sharing the honour of initiating the breakfast events. In her role as global co-convenor, Mary Garson skyped the Wellington breakfast from her Brisbane base at 5 a.m. local time to acknowledge their significant role. The final breakfast was launched in Hawaii 22 hours later. Dunedin, New Zealand, and Gothenburg, Sweden, hosted the most southerly and northerly breakfasts, respectively.

In Australia, a total of 13 different breakfasts took place in nine different cities (Adelaide, Brisbane, Cairns, Geelong, Hobart, Melbourne, Perth, Sydney and Townsville). Some breakfasts were arranged by local sections (Western Australia, Queensland), by newly formed Women in Chemistry groups linked to RACI (Adelaide, Sydney), or were linked to Divisional conferences such as the PhysChem2019 meeting held in Perth.

A major aim of the IUPAC100 celebrations has been to encourage chemists to network. Individual breakfast meetings announced the opening and closing of their event by posting a short video to Twitter or Instagram with the hashtags #IUPAC100 and #globalbreakfast. A global map displaying the locations of individual breakfasts was hosted on the IUPAC100 website, and as groups announced themselves, blue placeholders corresponding to their locations were converted into red hearts; it was after all only two days before Valentine’s Day! In this way, a virtual ‘handwave’ was created that travelled around the globe.

As the celebration progressed, groups were able to find out about the activities that had taken place in other cities. The Twitter message feed shared photo images and short videos in real time, and also presented an opportunity for those who could not join in directly to connect to the event. In particular, the final breakfast in Hawaii was identified on Twitter, and recognised by an email exchange between Margaret Baker (Hawaii), Joanne Harvey (Wellington) and Mary Garson (Brisbane), thereby completing a global handwave link.

Individual breakfast groups were encouraged to bring their own creative ideas to designing their individual event. Here in Australia, Macquarie University encouraged their participants to prepare a poster about an inspirational woman figure while at the University of Calgary in Canada, small groups were invited to make a duck from Lego pieces (no other instructions were provided). The Potsdam (Germany) group undertook a team-building activity involving buckminsterfullerene models. Participants at the University of Manitoba created a wall-size periodic table with the names of elements linked to the names of women in science, such as Cu for Marie Curie and Ar or Fr for Frances Arnold. In Korea, following breakfast, there was a technical session in which female speakers spoke about their research. Some breakfasts were able to attract sponsorship and provide prizes or takeaway ‘goodie’ bags. Catering was equally creative; individual cupcakes iced with the symbols of individual chemical elements, sponge cakes with periodic table designs (celebrating IYPT). Breakfasts in Germany and Italy celebrated in great style with prosecco and fruit juice.

Although every country arranged their events to suit the needs of their own local audience, it was envisaged that a focal point for individual breakfasts would be to explore career progression for women chemists. A set of questions compiled for use at the December 2018 inaugural Women in Organic Chemistry symposium of RACI were shared with individual breakfast organisers worldwide to assist them in constructing panel discussions or question and answer sessions. Two webinars were made available; one with Dr Raychelle Burks (St Edwards University, Texas, USA) explored the use of social media to expand career networks, while a second webinar was of a conversation with Kate Jolliffe (University of Sydney) in which Mary Garson (University of Queensland) asked her about her career history and her tips on career advancement.

An editorial in the Journal of Chemical Education by Marcy Towns (2019, vol. 96, pp. 1–2) neatly explained the benefits of joining in one of these global breakfast events. She summarised research on the benefits of networking for persistence within the STEM field, and gave insight into how a mentoring experience had been beneficial in her own career development.

A number of countries who had not previously engaged with IUPAC joined in the celebration. IUPAC is currently interested in feedback from breakfast groups about whether their networks could be used to form a global alliance of women chemists. Therefore, a PowerPoint display highlighting the role and activities of IUPAC was made available for download from the IUPAC website.

The NSW Branch breakfast was the launch event of the newly formed local Women in Chemistry group and featured advice on how to juggle a career in science as a woman by a panel of influential speakers, including Professor Margaret Harding. At Macquarie University, attendees chose a figure who inspired them, and submitted posters to display during the breakfast. Guests were encouraged to vote for their favourite poster, discuss why a particular figure was special to them, and play games focused on identifying female scientific heroes.

One of several Victorian group meetings, held by the Victorian Women in Chemistry group at CSIRO headquarters in Clayton, enjoyed a presentation on the periodic table by Jenny Sharwood, OAM. Another breakfast was held at Swinburne University, and there was also a small, but enthusiastic, group at the Waurn Ponds campus of Deakin University.

In Hobart, Tasmania, conversation centred on how to encourage women into a career in science.

There were three breakfasts in Queensland. Breakfast in Brisbane was organised by the local RACI branch (Dr Mary Fletcher (Past President, Queensland branch) and Associate Professor Joanne Blanchfield (President-Elect, Queensland branch), ably assisted by Ruth Meaney in her final contribution as Branch Coordinator). A panel of three senior women (academic Avril Robertson, patent agent Simone Vink and environmental scientist Michele Neil) discussed their individual career progressions, and commented on work–life balance and childcare issues. Breakfast participants also reflected on why they were inspired by chemistry, and shared their own experiences with younger chemists. Yang Liu arranged breakfast in Townsville (in spite of the major flood event). Among the eight women who joined in, it was agreed that they would get together frequently to share support and advice, given that they had not previously met each other despite working in the same university. The Cairns campus of James Cook University North Queensland held breakfast arranged by Claudia Cobos from the Australian Institute of Tropical Health and Medicine.

Finally, there were two breakfasts in Perth; the local RACI Branch attracted a broad mix of members to their event at the Bentley Technology Park. Skype contact was made with colleagues attending a breakfast event at the RACI Physical Chemistry Division conference on the University of WA campus, and internationally with breakfasts in Taipei and China, in this way adding to the global ‘handwave’.

Once the Global Breakfast Day was completed, individual breakfasts submitted video footage and photo images, and these were archived on the IUPAC website for use in preparing reports and promotional materials, such as videos. From the many messages received since the event, it is clear that there has been a genuine mood of togetherness. A big factor that contributed to the success of the event, and the ease of communication between different events, was the interactive website set up by IUPAC.

Our aim is that the enthusiasm and interest generated by the event will translate into ongoing support for IUPAC, as this global organisation reviews its developing role as an umbrella organisation prioritising diversity and inclusiveness. An important outcome is the reminder to women chemists that they should step up and take a role in their own professional societies; the leadership opportunities that are created by working on professional society business are worthwhile because they are so often beneficial to career development.

By coming together, participants gained exposure to new role models or research, industrial and educational contacts, thereby expanding their own individual networks.

Mary Garson FRACI CChem is a professor of chemistry at the University of Queensland, Brisbane, and an elected member of the IUPAC Bureau. Laura McConnell, a principal scientist at Bayer Crop Science working in the area of environmental safety, is the Chair of the US National Committee for IUPAC. Mary and Laura co-chair the Management Committee overseeing arrangements for the celebration of the centenary of IUPAC.

‘It’s exciting, and humbling, to think that there are groups of women, just like us, all over the world, hosting breakfasts just like this, sharing this moment together. Today we join together, women across the world, to support each other, make new connections and spark new collaborations.’ (Dame Carol Robinson, President Royal Society of Chemistry (UK))

‘... it was somewhat humbling to think that we were a small part of something much bigger … it’s perhaps the first time I’ve felt that way with the internet.’ (from blog about the Potsdam, USA breakfast)

‘Powerful. That’s how we feel today, tomorrow and always! Thank you IUPAC for this wonderful event; we are proud.’ (Lebanon)

‘... the event helped to foster a sense of community and create an environment where chemists from all backgrounds are welcome to share their perspective.’ (Canada)

‘We had great fun and wonderful opportunity to network.’ (Korea)

‘It was a little bit therapeutic, and we had a lot of laughs.’ (Italy)

‘We not only learnt that the power to do anything is within us but also that women possess infinite potential and capacity to excel in any field. The role models were right there in front of us.’ (India)

‘Our round table discussion talked about the obstacles women still face in the workplace.’ (Greece)

‘We will set up a women’s network in science and research using WhatsApp.’ (Peru)

‘There were many smiles, pancakes, stories, and an atmosphere of celebration and positivity!’ (Australia) 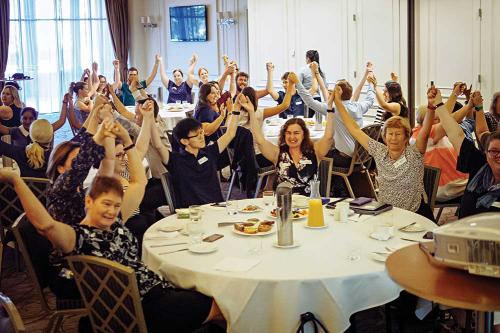 The Global Breakfast held in Brisbane. 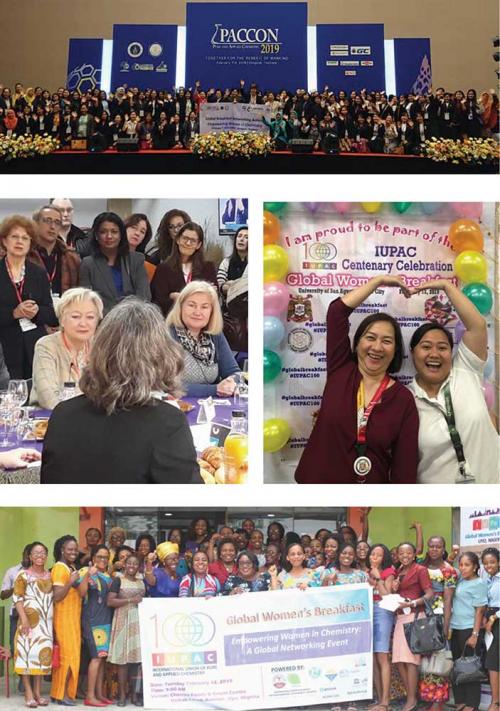 Global breakfasts held in (top) Bangkok, Thailand; (middle, left) at the Women in their Element symposium in Murcia, Spain; (middle, right) in Iloilo City, the Philippines; (bottom) in Uyo, Nigeria.