The Australian sheep industry is crippled by drug-resistant parasitic worms, but the unique chemistries in spider venoms are showing promise as a new class of drenching agent.

It’s a sight all too common for Australian farmers. A ewe collapses while being driven into the yard, her lamb circling anxiously by her side. The farmer carefully checks around her eyes and gums. They’re pale, almost white instead of a healthy, rosy pink. This sheep is anaemic, her blood being drained from the inside by thousands of parasitic worms.

The barber’s pole worm (Haemonchus contortus) is one of the most virulent parasitic worms of sheep. It lives in the abomasum – the fourth stomach – where it feeds on sheep blood. The name comes from the worm’s blood-filled intestines, which twist around white ovaries along the length of its body, giving it a barber’s pole-like appearance with red and white stripes.

These worms are only three centimetres long, but they have numbers on their side. As many as 10 000 of these writhing worms can infest a sheep, draining it of up to 10% of its blood each day. This makes the sheep anaemic, weak and malnourished, reduces its ability to produce wool and meat, and can be rapidly fatal.

Gastrointestinal roundworms, like the barber’s pole worm, cost the Australian sheep industry more than $400 million each year in treatments and lost productivity. Farmers usually treat these worms by ‘drenching’ them with an oral dose of a de-worming drug.

However, we only have four main classes of drugs available, and the worms have become widely resistant to all of them. As many as 90% of Australian sheep properties now have drug-resistant worms, with multi-drug resistance becoming increasingly common. For the sake of the sheep and the sustainability of the Australian sheep industry, we desperately need to find new treatments.

How spiders can help save sheep

Surprisingly, it may be spiders that hold the key to sheep survival. The unique and complex chemistries in spider venoms have formed the basis of my research for the past three years at the University of Queensland’s Institute for Molecular Bioscience and CSIRO Agriculture and Food, where I investigate venoms as potential sources of new antiparasitic drugs. Venoms have evolved over millions of years to become fine-tuned cocktails of bioactive molecules. They are fast-acting, potent and selective, which makes them excellent drug candidates. Spider venoms have already been shown to be useful insecticides and promising treatments for chronic pain, stroke and epilepsy.

There are about 47 000 species of spiders, all possessing complex venoms made of inorganic salts, small organic molecules, neurotoxins, peptides and larger proteins. Some spiders produce venoms containing more than 1000 unique peptides, leading to a conservative estimate of more than 10 million unique peptides in spider venoms. It is these exciting qualities that make spider venoms such a vast and untapped resource for drug discovery.

To study venom you need to collect it from the spider. As an arachnophobe, this is the part that I find most challenging, and frankly a little terrifying. It begins by shepherding a large tarantula out of its container and onto the lab bench. We usually work with tarantulas because their large size makes them relatively easier to handle and results in larger venom yields. Then, with fast hands (and a slightly faster heartbeat), we carefully pick the spider up by its fused head and thorax, and position it over a tube covered in a tough plastic wrap. Using tweezers, we then gently coax the tarantula’s fangs to puncture the plastic covering over the small collection tube. A small electric shock (enough to stimulate the venom glands but not hurt the spider) is applied to the muscles over the venom gland, which squeezes out a few tiny drops of precious venom.

Using small amounts of this venom, we can then investigate the antiparasitic properties of the extracted venom by testing it against the early life stages of the barber’s pole worm.

Female barber’s pole worms in the stomach of a sheep can lay thousands of eggs every day. These eggs are expelled in the sheep’s faeces onto the pasture, where they grow up to the infectious third larval stage. They then crawl up blades of grass to be eaten by sheep, so that the cycle of infection continues.

To experiment on the worms I therefore have to dig through sheep manure to find the eggs. I hand-filter the sheep poo and use centrifugation to separate the eggs from the debris, before finally bleaching the eggs to remove and bacteria and viruses.

Once the eggs are collected, they are hatched in a dish and the larvae grown in venom solution. I observe their development, looking for signs of paralysis or behavioural abnormalities that might signify antiparasitic activity. After a week, I count how many worms have survived to develop to the infectious third larval stage. If we can inhibit or prevent this development, it indicates that the venoms are antiparasitic.

Once an active venom is identified, we use chromatography to fractionate the venom according to the chemical properties and sizes of its components. Using this technique, I can then test and retest the venom fractions against the parasites until the individual molecules responsible for the antiparasitic activity are isolated.

Then I study the masses and structures of the active compounds. I also investigate how the venom is working, because identifying new drug targets is highly useful for long-term research to continue fighting drug resistance.

Once we understand the nature of the active molecule, we can begin optimising it, making structural modifications and seeing how this affects selectivity, stability and potency – all essential qualities for an effective and targeted drug. We then need to investigate whether these molecules have any side effects and make sure that they are safe to give to sheep. Fortunately, most spiders are relatively harmless to mammals – less than 1% of all spider species are actually dangerous to humans – so these molecules are likely to be safe to use as drugs.

It is essential that we identify the active components from the venom. It would not be possible to get enough venom from spiders to be useful for the 70 million sheep in Australia. Instead, we are looking to produce these venom molecules in the lab, using genetically engineered bacteria or synthetic chemistry. It is vital that these molecules can be produced cost-effectively at scale to ensure these treatments are accessible to Australian farmers.

We have found that spider venoms contain molecules that can stop the worms in their tracks. These venom molecules show no cross-resistance to the drug-resistant strains of barber’s pole worms, providing hope that we can overcome Australia’s serious problem of widespread multidrug resistance.

From farm animals to suburban pets: the global impact of parasitic worms

The problem of parasitic worms, however, is not limited to Australia. The barber’s pole worm is found around the world, posing serious threats to sheep and goat production in many regions.

Our beloved pets aren’t safe, either. Heartworm, hookworms and roundworms cause serious infections in cats and dogs, requiring regular drug treatment. Mass drug treatment is also the mainstay for many major human parasitic worms as well. Worms such as Brugia malayi, B. timori and Wuchereria bancrofti cause the tropical disease lymphatic filariasis. This causes serious disability in 40 million people worldwide, as the worms infest the lymphatic system and cause large and painful swellings. With 1.1 billion people at risk of this disease and needing regular treatment, this presents a major burden for public health.

At the University of Queensland and CSIRO, we are working with an international team of researchers to investigate whether spider venom molecules can be applied more broadly against such parasitic worms. Already, one particular tarantula venom molecule is a highly promising drug candidate, showing no signs of toxicity in animal models but strong activity against a major human parasitic worm.

So next time you encounter a tarantula – and yes, we do have Australian tarantulas – take a moment to say thanks. It may just save our Australian sheep industry from these devastating parasitic worms. 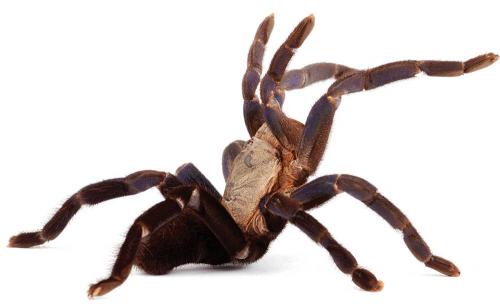 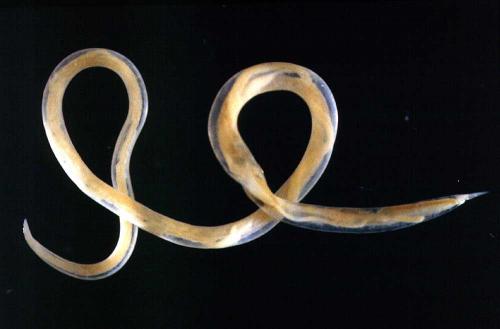 Barber’s pole worm is a roundworm that grows up to 30 millimetres long and sucks blood from the lining of the sheep’s stomach, causing anaemia. Symptoms include swelling under the jaw (bottle jaw), weight loss and reduced wool growth and tensile strength. In lactating ewes, milk production can decline. More severe infections can prove fatal. Female worms have a red and white striped appearance, from which the common name ‘barber’s pole’ worm is derived. Barber’s pole worms are the highest egg producers of all sheep worms. Females can lay up to 10 000 eggs per day. 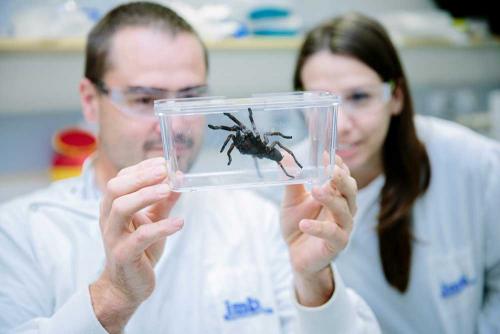 Spiders have evolved unique and complex venoms over millions of years. These venoms are fast-acting, potent and selective, which are important criteria for drug development. Tarantulas like this whistling tarantula (Selenotholus foelschi) are useful specimens because they produce larger amounts of venom for study. Researchers at the University of Queensland and CSIRO Agriculture and Food are investigating whether these venoms can be used to fight blood-sucking parasitic worms.

Venoms have evolved over millions of years to become fine-tuned cocktails of bioactive molecules. They are fast-acting, potent and selective, which makes them excellent drug candidates.

... we are looking to produce these venom molecules in the lab, using genetically engineered bacteria or synthetic chemistry.