Bog bodies such as Tollund Man provide a fascinating insight into biochemical action below the ground.

On 13 May 1983, the partially preserved head of a woman was discovered buried in peat at Lindow Moss, near Wilmslow in Cheshire, England. Police suspected a local man, Peter Reyn-Bardt, whose wife had gone missing two decades before.‘It has been so long, I thought I would never be found out’, confessed Reyn-Bardt under questioning. He explained how he had murdered his wife, dismembered her body and buried the pieces near the peat bog.

Before the case could go to trial, carbon dating of the remains showed that the skull was around 17 centuries old. Reyn-Bardt tried to revoke his confession, but was convicted and sentenced to life imprisonment.

Lindow Woman and other ‘bog bodies’, as they have come to be known, are surprisingly common. Under just the right set of natural conditions, human remains can be exceptionally well preserved for extraordinarily long periods of time.

Records of bog bodies go back as far as the 17th century, with a body discovered at Shalkholz Fen in Holstein, Germany. Bog bodies are most commonly found in northwestern Europe – Denmark, the Netherlands, Ireland, Great Britain and northern Germany. The oldest specimen recorded, Koelbjerg Man (Syddanmark, Denmark), has been dated to around 8000 BCE, during the Mesolithic period. The oldest fleshed body is that of Cashel Man (County Laois, Ireland), dating to around 2000 BCE during the Bronze Age.

The best-preserved specimens are found in colder bogs, particularly those closer to salt water. Until the 19th century, they were mostly reburied in Christian burials, but as science developed so did the study of this remarkable phenomenon. We now know that to be preserved, a body at the time of death must be in a bog when the water temperature is less than 4°C, and ideally in a sphagnum bog that has an average annual temperature of less than 10°C.

At these temperatures, oxidation conditions and pH, the immediate bacterial action causing putrefaction is retarded, giving time for the bog waters to infiltrate the body.

Bog waters are very rich in humic acids and very low in mineral content. Sphagnum mosses, particularly Sphagnum chamaedaphne, have negatively charged cell surfaces. They tend to take in cations, replacing them with acid, to reach pH levels as low as 3.3–4.5. Sugary substances released by dying moss cells then tan the tissues to form a type of leather. The skin turns brown, and the hair red.

The highly porous sphagnum cells absorb a lot of water, up to 90% of their mass, and with the accumulation of dead cell matter they quickly form substantially anaerobic environments, even within 30–50 millimetres of the exposed surface. Provided that the rate of evaporation is less than the rainfall (so that the bog stays wet), then these bogs can form the ideal conditions for the preservation of tissue over long periods of time.

Something rotten in the state of Denmark

Perhaps the most famous and best-studied bog body, Tollund Man (see opposite and cover images), was found in 1950 on Denmark’s Jutland Peninsula. He died some time in the fourth century BCE, yet his face could almost be that of a man asleep, still with a three-day growth of stubble on his chin.

Tollund Man was found wearing a belt but no clothes. That’s either an odd fashion choice, or an indication that the clothes themselves rotted away over the ages. This is common to the bog bodies catalogued, with most of them found either naked or wearing only head gear.

Teams of scientists and doctors have examined the remains of Tollund Man, taking approximately 16 000 CT-scan images, plus X-rays, IR and UV images and endoscopic investigation. The structures in his head – brain, tongue, larynx – are remarkably intact because specific efforts have been made by scientists to further preserve them.

The key task in preserving the tissues was to replace the bog water initially occupying space in the cells. To achieve this, the head was placed in ethanol, then toluol, then liquid paraffin at 83°C. Bees’ wax, with similar properties to paraffin, is known to be non-perishable, with Viking-era samples having been preserved this way for more than 1000 years underground.

Without similar efforts at preservation, the remainder of Tollund Man’s body deteriorated rapidly after exposure to air. Now entirely dry, it is little more than a skeleton.

Tollund Man’s hair has been examined by Professor Karin Margarita Frei of the National Museum of Denmark, together with that of Haraldskjaer Woman (fifth century BCE, found in 1835 near Jutland, Denmark) and Huldremose Woman (second century BCE, found in 1879 near Huldremose, Denmark). Using studies of trace strontium-86 and -87, Frei was able to prove that both of the women had travelled substantial distances over their last few years of life.

Results for Tollund Man were inconclusive. With only 2–3 centimetres of hair, as compared to around 50 centimetres for the two women, there was much less history to work with. Because of the slow rate at which hair grows, Frei was able to use it as a record of the environmental strontium at the time of growth. Comparing the isotope levels and ratios to known geographical and time-based data gives meaningful information about a person’s movements during the 2–3 years before death.

Frei’s work adds a new dimension to the ongoing conjecture regarding cause of death. Overwhelmingly, bog bodies show evidence of violence. Tollund Man, for example, had been strangled, with the rope still around his neck when he was discovered. Many bodies show much more horrific wounds. Lindow Man’s injuries (dating to around the time of the Roman invasion, found in 1984 in Cheshire, England) included blows to the top and back of his head, a possible garrotte, stab wound to the neck and broken neck, which finally killed him.

The two dominant theories are that the bodies represent either human sacrifice or the execution of criminals. Both have their origin in contemporaneous Roman accounts of their encounters with Northern European peoples. Frei’s studies found that the clothing (unusually) found with both women was of high quality, imported, probably dyed and expensive. ‘You sacrifice something that is meaningful and has a lot of value. So maybe people who [had] travelled had a lot of value’, Frei told National Geographic at the Euroscience Open Forum in Copenhagen in 2014.

Frei went on to suggest that, rather than the sacrifice of slaves (as might be expected of human sacrifice, and as occurred in Viking culture), these apparent sacrifices were ‘fine ladies’, and that the travel in their final years might even have been associated with the ritual.

At the Copenhagen forum, other hypotheses were presented, including the idea that the two women died of natural causes, and may have been buried in the bog because as ‘geographical outsiders’ the locals did not know their funerary customs. Simply, there is no real way of knowing for sure the beliefs and practices of cultures from 2000 years ago that left no written records.

However, the question of whether the bog bodies might have actually represented a funerary custom does point to an interesting new trend. In the modern era, the traditional Western burial customs are being slowly displaced, mostly by cremation, but also by a range of exotic alternatives. People can now choose to have their ashes formed into artificial diamonds, be mixed with concrete to be made into artificial reefs, be pressed into a playable vinyl record or even launched into space. Bodies can be preserved with plastic and displayed, or donated for study at one of the ‘body farms’ such as AFTER (see box).

Perhaps being preserved as a bog body might just enter that pantheon of options. It fits the rock’n’roll philosophy: ‘Live hard, die young, and leave a good-looking corpse’.

When I was asked to write an article about human decomposition chemistry, I was a little concerned about the depths of my ignorance in biochemistry. But then I thought ‘Surely I can dig something up’. As it turns out, the chemistry of human decomposition is complex, messy and super-gross.

The human body is composed of approximately 64% water, 20% protein, 10% fat, 1% carbohydrate and 5% minerals. Once the blood stops flowing, oxygenation of the tissues ceases, and cell reaction products – particularly CO2 and H2O – start to accumulate. These combine to form carbonic acid, which in combination with existing digestive enzymes spontaneously starts to degrade the complex macromolecules (particularly proteins and lipids) via a process called autolysis.

In combination with autolysis, the body rapidly passes through the first four stages of death (pallor mortis, algor mortis, rigor mortis and livor mortis) to putrefaction, which is a highly complex decomposition of the body’s proteins (proteolysis), and eventual breakdown of the connective tissues.

Shortly after death, neutral lipids are hydrolysed by enzymes known as lipases.

Proteins in the gastrointestinal tract are the first to break down, then proteins in other organs – the pancreas, brain, liver and kidneys – then muscle proteins, then hard proteins such as collagen and keratin. This is why hair is often found on corpses, even after long periods. The breakdown products are proteoses, peptones, polypeptides and amino acids, and the further breakdown of those amino acids gives the characteristic amines putrescine (tetramethylenediamine) and cadaverine (1,5-pentanediamine), together with hydrogen sulfide, ammonia and methane, all of which are classically associated with the strong odours of decomposition.

As a demonstration of the complexity of the multiple reactions, the Australian Facility for Taphonomic Experimental Research (AFTER) identified 452 volatile organic compounds released from a range of human and animal remains over a six-month period. Of these, human and pig decomposition products were the most similar across species.

Both autolysis and putrefaction are substantially aided by bacteria, many of which are already present when the body is living. However, the environmental conditions where the bog body is placed combine to preserve the remains. At or below 4°C, both enzymic and bacterial processes are essentially stopped. The water in which the body is submerged, and the generally anaerobic conditions both prevent exposure of the tissues and associated oxidation. And the high levels of humic acids further retard the putrefaction reactions. Ultimately, the sphagnum bog environment provides the ideal conditions of low temperature, low oxygen and high acid for the natural preservation of the tissues.

However, those same conditions typically also result in the demineralisation of the remains, and it is common to find bog bodies missing bones and teeth. Put simply, the mineral (calcium hydroxyapatite and osteocalcium phosphate) portion of the bones is leached out, leaving the organic (collagen and other proteins). This process was very well demonstrated by Dr Rob Morrison in an experiment for RACI’s ‘100 Reactions for RACI 100’ project in 2017. 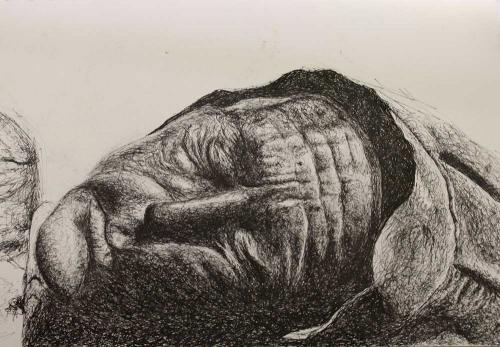 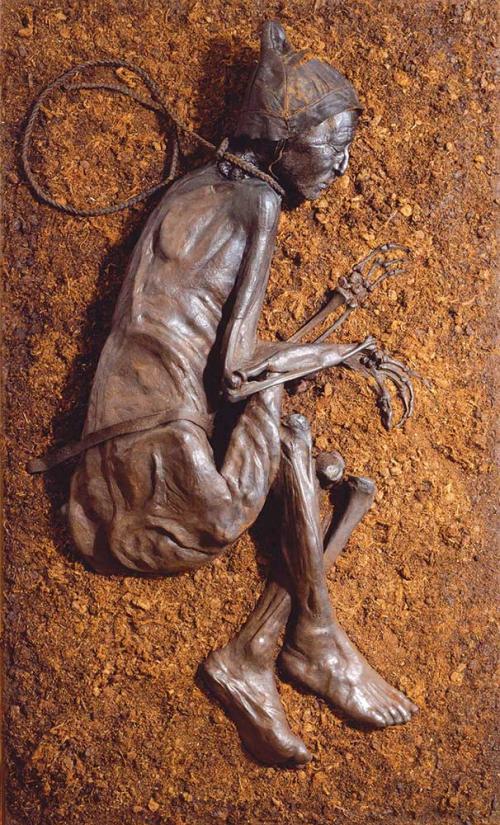 Tollund Man was discovered in a bog close to Bjældskovdal, about 10 kilometres west of Silkeborg, in Denmark. The Silkeborg Museum houses Tollund Man’s remains. 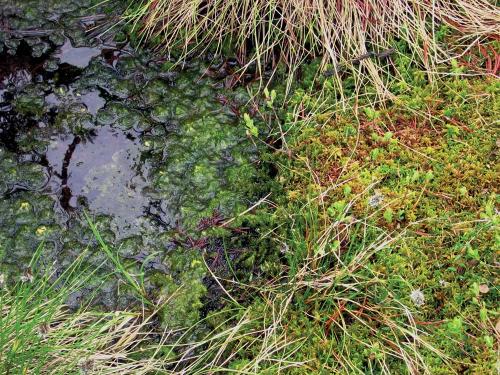 Bogs of sphagnum moss have ideal conditions for the preservation of bodies.

The best-preserved specimens are found in colder bogs, particularly those closer to salt water.