Ceramic inclusion in a meteorite

University of Chicago scientists have discovered evidence in a meteorite that the rare element curium was present during the formation of the solar system. This finding ends a 35-year-old debate on the possible presence of curium in the early solar system, and plays a crucial role in reassessing models of stellar evolution and synthesis of elements in stars. Details of the discovery appear in Science Advances (doi: 10.1126/sciadv.1501400).

‘Curium is an elusive element. It is one of the heaviest-known elements, yet it does not occur naturally because all of its isotopes are radioactive and decay rapidly on a geological time scale,’ said the study’s lead author, François Tissot, from the Massachusetts Institute of Technology.

And yet Tissot and his co-authors Nicolas Dauphas and Lawrence Grossman have found evidence of curium in an unusual ceramic inclusion they called ‘Curious Marie’, taken from a carbonaceous meteorite. Curium became incorporated into the inclusion when it condensed from the gaseous cloud that formed the sun early in the history of the solar system.

The longest-lived isotope of curium (247Cm) decays over time into an isotope of uranium (235U). Therefore, a mineral or a rock formed early in the solar system, when 247Cm existed, would have incorporated more 247Cm than a similar mineral or rock that formed later, after 247Cm had decayed. If scientists were to analyse these two hypothetical minerals today, they would find that the older mineral contains more 235U than the younger mineral.

Early studies in the 1980s found large excesses of 235U in any meteoritic inclusions they analysed, and concluded that curium was very abundant when the solar system formed. More refined experiments showed that these early results were spurious, and that if curium was present in the early solar system, its abundance was so low that state-of-the-art instrumentation would be unable to detect it.

Scientists had to wait until a new, higher-performance mass spectrometer was developed to successfully identify, in 2010, tiny excesses of 235U that could be the smoking gun for the presence of 247Cm in the early solar system.

Models predict that curium, if present, was in low abundance in the early solar system. Therefore, the excess 235U produced by the decay of 247Cm cannot be seen in minerals or inclusions that contain large or even average amounts of natural uranium. One of the challenges was thus to find a mineral or inclusion likely to have incorporated a lot of curium but containing little uranium.

With the help of study co-author Lawrence Grossman, the team was able to identify and target a specific kind of meteoritic inclusion rich in calcium and aluminium. These CAIs (calcium, aluminium-rich inclusions) are known to have a low abundance of uranium and likely to have high curium abundance. One of these inclusions – Curious Marie – contained an extremely low amount of uranium.

‘It is in this very sample that we were able to resolve an unprecedented excess of 235U,’ Tissot said. ‘All natural samples have a similar isotopic composition of uranium, but the uranium in Curious Marie has 6% more 235U, a finding that can only be explained by live 247Cm in the early solar system.’

Thanks to this sample, the research team was able to calculate the amount of curium present in the early solar system and to compare it to the amount of other heavy radioactive elements such as iodine-129 and plutonium-244. They found that all these isotopes could have been produced together by a single process in stars.

‘This is particularly important because it indicates that as successive generations of stars die and eject the elements they produced into the galaxy, the heaviest elements are produced together, while previous work had suggested that this was not the case,’ Dauphas explained. 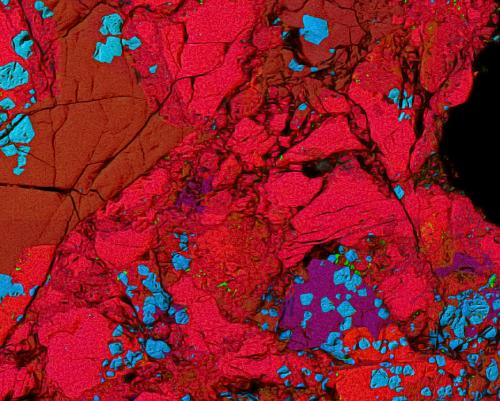 The Allende carbonaceous meteorite is peppered with inclusions that have a ceramic-like chemistry (red for calcium, blue for aluminium, green for magnesium in the false colour image shown; field of view is 0.5 mm). When they formed, these inclusions incorporated the short-lived nuclide curium-247 (with a half-life of 15 million years), traces of which have been detected as a significant excess in uranium-235, its decay product.