In 1940 the Macmillan company published a Textbook of physical chemistry and a couple of years later a rather cryptic but decidedly unfavourable review of it by E.A. Guggenheim appeared in the Transactions of the Faraday Society. ‘In a certain city’, it began, ‘a councillor with grandiose ideas conceived the curious desire of having a picture of the whole city painted on a single canvas’. After commenting on the fine buildings in the city, Guggenheim went on to say that no ‘painter could be found to attempt the task’ until ‘a certain travelling artist’ was found to do it. ‘Every building, large or small, ancient or modern, beautiful or hideous, useful or useless was included on his canvas, but the product of his toil was not a picture because he had omitted to pay any regard to perspective. The name of the city was Physical Chemistry and the name of the painter Samuel Glasstone.’ Ouch!

The editor must have had second thoughts about the wisdom of offending a well-known author, so he asked N.K. Adams to re-review Glasstone’s book. ‘In the city referred to in a recent review’, Adams wrote, ‘there were many young and somewhat inexperienced immigrants, needing urgently a comprehensive guide-book’ to help them appreciate the important works of art in the city. ‘A well-known art critic’, he continued, ‘resident in the city … took exception to the illustrated guide-book’, but Adams felt it was ‘an informative, and in many respects very clear, panorama of the city’, so with ‘considerable respect for both the critic and the author’, he ‘rushed immediately to buy a copy’.

Guggenheim’s analogy probably owes something to the introduction in an earlier book, Thermodynamics by G.N. Lewis and Merle Randall (1923), that was brought to my attention by John Casey. ‘There are ancient cathedrals which, apart from their consecrated purpose, inspire solemnity and awe. Even the curious visitor speaks of serious things, with hushed voice, and as each whisper reverberates through the vaulted nave, the returning echo seems to bear a message of mystery. The labour of generations of architects and artisans has been forgotten, the scaffolding erected for their toil has long since been removed, their mistakes have been erased, or have become hidden by the dust of centuries. Seeing only the perfection of the completed whole, we are impressed as by some superhuman agency. But sometimes we enter such an edifice that is still partly under construction; then the sound of hammers, the reek of tobacco, the trivial jests bandied from workman to workman, enable us to realize that these great structures are but the result of giving ordinary human effort a direction and a purpose’. And then, ‘Science has its cathedrals, built by the efforts of a few architects and of many workers’.

Reviews of books in other branches of chemistry attract more jocular comments such as ‘this is a book to dip into from time to time but too heavy to read in bed’ and ‘one measure of readability is whether or not a book can be enjoyed in the bath’. Physical chemists as reviewers are less forgiving of their peers, and Guggenheim was well known for his acerbic reviews and what he called ‘being mischievous’. He damned van Ness’s book on non-electrolyte solutions as pompous, and wrote that ‘this pomposity is paralleled by platitudinous padding in plenty’. Van Ness came back with ‘perhaps my monograph suffers from the same “pride and prejudice” ascribed to Professor Guggenheim’s well-known book Thermodynamics by “a distinguished American reviewer”’. He was referring to George Scatchard’s review of Guggenheim’s 1949 Thermodynamics. An advanced treatment for chemists and physicists for which he suggested that subtitle. In his review published in 1950 in the Journal of Chemical Education, Scatchard wrote that the present book was ‘essentially a matured version’ of Guggenheim’s Modern thermodynamics by the methods of Willard Gibbs (1933) ‘grown to about twice the size’, and concluded that ‘it is hard to name a group which will find this book useful’.

Many people found Glasstone’s book useful. He shrugged off the criticism and went on to produce a second edition in 1956. I still have my copy: a masterpiece in 1320 pages. 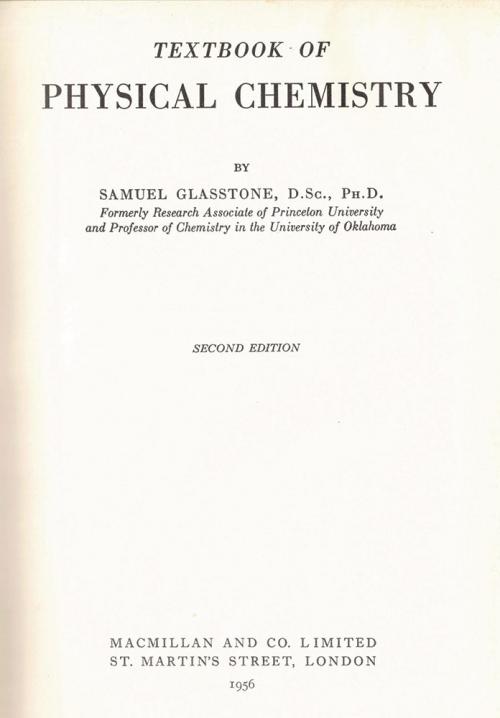 Physical chemists as reviewers are less forgiving of their peers, and Guggenheim was well known for his acerbic reviews and what he called ‘being mischievous’.