From a cat’s whisker

It is surprising how little students learn these days about how things actually work and how they hardly ever see the ‘guts’ of the devices they use. ‘No serviceable parts inside’ is a common label warning. People of my vintage, on the other hand, made things or pulled them apart.

I was shocked recently to see a reasonably sophisticated calculator for sale for only a couple of dollars – solar cell included! This led me to ponder whether the transistor could be designated as the most dramatic and pervasive invention of the 20th century.

My dad, an electrical engineer, scrounged a pair of ex-army earphones. He attached them across a coil of thin wire wrapped around an empty cardboard toilet roll, continued it as a long aerial strung through the window to a tall tree with the other end attached to a metal stake in the ground. A variable condenser (capacitor) completed the tuned circuit that covered the range of the carrier frequencies of all the strong local radio stations.

However, the pièce de résistance was a ‘cat’s whisker’, which made the music for my ears, literally. No moggie was depilated; this crucial element consisted of a fine-tipped copper wire just touching the surface of a pea-sized chip of galena (a black silvery lead sulfide ore).

The radio waves from the stations’ transmitters covered frequencies roughly from 500 to 1500 kilocycles per second and these were amplitude modulated (AM) with sound waves ranging roughly from 20 to 20 000 cycles per second. The cat’s whisker/galena short circuited the higher frequency carrier wave to earth but demodulated (rectified; turned AC into DC), the information part of the radio signal (the sound), and this was fed to the earphones (bit.ly/36esBrt). You had to find a ‘sweet spot’ on the galena surface for this to work, so no one was allowed near you in case it was lost in vibration.

The variable condenser is like interlocking fingers opening and closing, thereby changing the overlap of the plates of the condenser and hence its capacitance, which in turn shifts the tuned circuit frequency to the next station.

Thoughts of cat’s whiskers triggered W.B. Shockley and colleagues’ 1948 invention of the solid-state transistor (at Bell Telephones), for which they received the 1956 Nobel Prize. Unlike a diode, this could now amplify signals. W.H. Schottky (another worthy of the time), was a leader in metal–semiconductor junction theory, the basis of operation of most of the early crystal detectors. This was an early example of nascent ideas on quantum mechanics explaining real macroscopic effects.

1950s radios were richly endowed with 5–7 transistors powered by a dry cell battery. Some replaced the cat’s whisker, others amplified the signal, while the last group rectified the sound wave. Aerials and earths were no longer necessary but were provided to improve reception. Radios had been liberated from a power point. But on Cronulla Beach they all tended to disconcertingly and synchronously change stations with the changing temperature! This was solved by replacing doped germanium with doped silicon, which has a larger electronic gap and is thus less heat sensitive. But it required a more challenging metallurgy.

In both cases, chemical purity was the key to success. This was established by a process called zone refining, which we also used to bring organic materials (such as pyrene) to spectroscopic purity. Impurities were carried along in the molten zone doing a slow transit and concentrated in a slug at the end of the sample tube, to be dumped.

In 1960, chemical instrumentation had taken advantage of these developments and some valve units were being replaced with solid-state power-rectifying diodes and transistor circuits.

A popular transistor, OC-71 (bit.ly/38xrJQ7) could be scratched to emulate the more expensive photosensitive OCP71, which became the basis of an interesting student lab experiment. The sensitivity of this transistor to near-infrared allowed the building of a simple student IR colorimeter to measure the spectral shift that occurred when copper ions were complexed with different ligands, such as ammonium and chloride.

The microchip was developed in 1959 and today a chip containing billions of transistors costs roughly the same as a single transistor did in 1954. Now there is a supercomputer that has more than a trillion transistors (econ.st/30IyaND).

Think what else electronic miniaturisation has done for (and to) our society – phones and drones; satellites (GPS) and space exploration; medical devices (from bionic ears, diabetes monitors and gut-exploring robots). Social media has drastically changed global society and politics. And the OCP71 was, in retrospect, the first primitive accidental silicon solar cell. 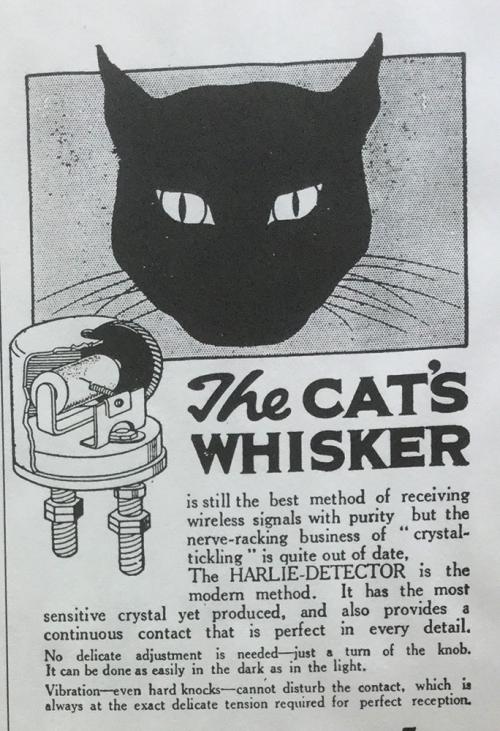 A commercial-type crystal radio (c. 1920s). Left: the very fine cat’s whisker wire hovering above a chip of galena mineral. Right: down below the coil is the variable condenser (attached to the tuning dial). 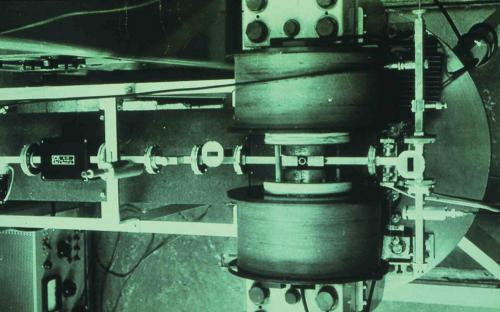 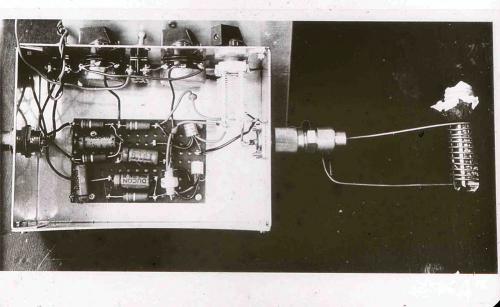 This electron spin resonance (microwave) spectrometer was built with the help of Gibb Bogle, CSIRO Radiophysics, next door). On the right is a mini-PMR instrument (water probe with manganese ions for paramagnetic relaxation) to measure the magnetic field strength, as part of my MSc studies, 1962. 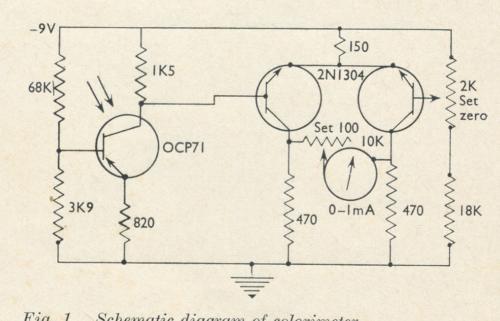 However, the pièce de résistance was a ‘cat’s whisker’, which made the music for my ears, literally.