Beyond chemistry: In a different light

Six years ago, David Oldfield started taking photos of Australian native flowers in UV light, with his wife’s garden as the perfect source of specimens. Guided by websites and the results of a literature review, he produces striking images such as those featured in this issue.

Many flowers exhibit dark patterns visible under ultraviolet (UV) light, but invisible to the human eye. Honeybees have been studied extensively as pollinators and their eyes have been shown to be sensitive to UV, blue and green light. It is widely believed that the UV patterns of flowers assist pollinators to find nectar or pollen on the flowers. There have not been many studies of visual systems of Australian insects.

The sensors in modern consumer digital cameras are designed to produce images as we see them. They achieve this by having a so-called UV-IR cut filter installed in the light path in front of the digital sensor, which blocks all wavelengths outside the wavelength range of human eyes, from blue at around 400 nm to red at around 700 nm. The first step in taking UV images is to have the UV-IR cut filter removed and replaced, in clean-room conditions, with a clear non-absorbing filter, as can be done by Camera Clinic in Melbourne.

When I started attempting to take UV flower photographs about six years ago, I was guided by a wonderful website (www.ultravioletphotography.com) that answered all my questions. I was surprised to find that nobody else on that website was taking photos of Australian native flowers in UV light. That was too much of a challenge for a Yorkshireman to resist and you will now find some of my images on that site (Blum A.B. 2016). The method used to take UV images is covered in my Learning List (Rørslett B. 2013, Blum A.B. 2013). There is also a very useful link (‘Cadmium’ 2019) that shows the false UV colours obtained through narrow (10 nm) pass band filters, which range from green at 325 nm, through yellow at 350 nm to blue at 383 nm. The range of false UV colours in my UV photographs of some Australian native flowers range from pale cream to dark blue, which may give an approximate idea of the wavelength of the reflected UV light.

The colours seen in these UV images are false colours due to the interaction of UV light with the red, green and blue dyes used in the Bayer array on the digital sensor, which produce the colours we see with our eyes in visible light (Crowther J.M. 2019).

A picture is said to be worth a thousand words, so look at Hibbertia humifusa, the rising star guinea flower, photographed in the Grampians of Victoria in visible light and UV. The insect in the UV shot, which was not present for the previously taken visible image, gives some idea of the size of the flower. The stamens, which are yellow in visible light, become dark grey or black in UV light, which corresponds to the dark pattern visible in many flowers as mentioned. It seems likely that UV-absorbing pigments are expressed in the stamens and anthers of the flowers in order to protect the genetic material of the flowers from UV degradation. Pollinating insects, which can see in UV light, may then be able to orient themselves to visit those areas. The petals themselves show a pale cream false UV colour.

My wife, Sue, has been an enthusiastic grower of Australian native plants for many years. If I place a garden-grown flower in my studio and take visible and UV photographs using flash as I do in the field, then darken the room and illuminate the flower with a UV-LED (light-emitting diode), with peak emission at 365 nm, I can take a photograph of the UV-initiated visible fluorescence (UVIVFL) of the flower. I have found it impossible to take UVIVFL images ‘in the bush’ as it is next to impossible to set up a dark tent to exclude daylight. The visible, UV and UVIVFL images become a complementary set to describe and investigate the floral structure.

When I started in this field in 2013, I did a literature survey for pigments of Australian native flowers and found that in 1924 James Mathew Petrie at the University of Sydney had worked on the yellow pigment of Acacia longifolia, Sydney golden wattle. He identified the water-soluble pigment as a rhamnose glucoside of kaempferol, a flavonol found in a large range of plants. Kaempferol has UV maximum absorption at 265 and 365 nm, the latter being in the centre of the UV-A region covered by these UV photographs, which are taken through a Baader U filter that passes radiation between 320 and 380 nm.

I photographed Acacia longifolia to get the visible, UV and UVIVFL images shown. Stamens are the most conspicuous part of the acacia flowers. In the UV image, the yellow stamens have become black, as would be expected from the UV properties of kaempferol. We can see, in the UVIVFL image, the pale yellow fluorescence of the pollen on the anthers, supported on green filaments, with insignificant small green petals at the base of the stamens. Kaempferol has a reported fluorescence maximum at around 550 nm in the green region of the visible spectrum.

Eucalyptus flowers resemble those of acacias by being effectively bundles of stamens. Eucalyptus camaldulensis (river red gum) displays, in visible light, cream flowers consisting of buff anthers on pale translucent filaments, with an orange stigma, which become in UV, dark grey anthers on dark blue filaments, with a dark grey stigma and in UVIVFL pale yellow anthers on light blue/green filaments, with a blue/green stigma. The pigments in these flowers are probably different from those in acacias but they may perform the same UV-protective functions for the genetic material in the plants.

Native orchids are attractive plants to grow and photograph, as shown here with Pterostylis obtusa, the blunt-tongue greenhood. The flower, which is bright green in visible light, becomes light-blue to grey in UV and vivid red and blue in UVIVFL. The red colour seen in the UVIVFL image is probably due to chlorophyll fluorescence.

It is a very privileged position to be able to see these features in UV and UVIVFL. One thing I quickly learnt, was to avoid trying to predict how the UV and UVIVFL images would look. I would love to hear from anyone who could guide me to papers that contain UV-vis spectra of Australian native flowers.

David Oldfield FRACI CChem (dsoldf@netconnect.com.au) took early retirement in 1999 after working for 32 years at what became Aeronautical and Maritime Research Laboratory, Maribyrnong in The Defence Scientific and Technology Organisation (DSTO). He was Hon. Treasurer of the RACI Polymer Division for 20 years from 1975. David has been an enthusiastic amateur photographer from his school days in the West Riding of Yorkshire and gained his Fellowship of the Royal Photographic Society in 1997. 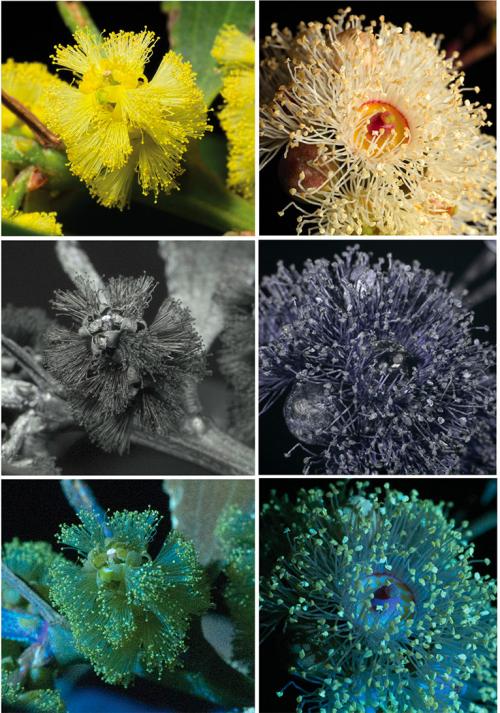 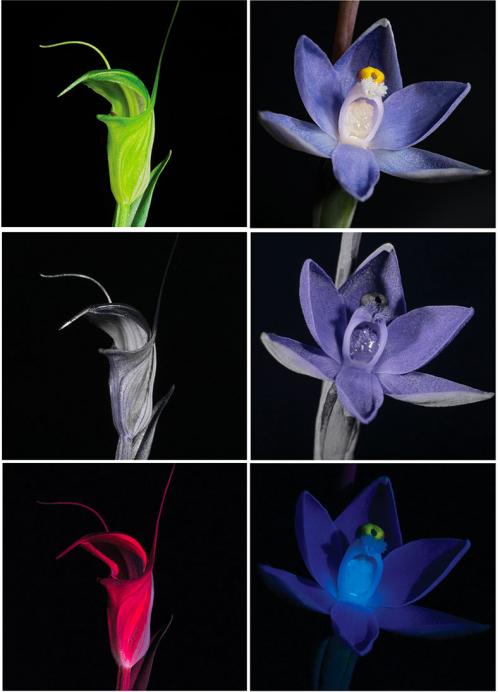