‘Younger’ chemists: who are they?

Age or career stage? ‘Younger’ chemists do not easily fit a single category, but they do have something in common: a need for support.

When students decide on a chemistry undergraduate degree, they are told that this qualification can open doors to almost any industry. But younger chemists are finding that just getting that degree is no longer enough.Today’s younger chemists face challenges they feel poorly equipped to deal with. However, they are more interconnected than ever and so support networks for younger chemists are cropping up in Australia and abroad.

The International Younger Chemists’ Network (IYCN) is one such organisation. We attended the first General Assembly of the IYCN as delegates for Australia in July 2019. A total of 43 delegates attended from 33 countries, including Australia, Germany, the US, France, Italy and China. There were also delegates from Papua New Guinea, Nigeria, Egypt and Ecuador, and some virtual attendees.

The mission of the network seemed clear: ‘to connect and empower younger chemists globally’. But when the discussion came to defining the membership of the organisation – ‘younger chemists’ – the debate grew heated. Should this be defined as an age, a career marker, or both? This question has been bothering us ever since. Who is a ‘younger’ chemist?

The question has no straightforward answer. Based on the word ‘younger’, it is tempting to draw a line by a specific age. The European Younger Chemists’ Network automatically accepts members of the European Chemical Society who are younger than 35. In our research, we have seen opportunities and awards offered to scientists no older than 30–45.

However, not everyone reaches the same career stage at the same age. Increasingly, awards and opportunities for younger chemists are defined by career markers, often years after their terminal degree. They may make allowances for career breaks. These definitions are more inclusive to chemists who follow a non-linear career pathway or experience interruptions.

This version is also widely accepted by the younger chemists themselves. When we spoke to the chairs of each of the RACI’s five groups for younger chemists, all described their membership in career terms.

‘It doesn’t necessarily matter how old you are. It’s about where you are in the career progression,’ said Karin van der Pal, PhD student at Curtin University and Chair of the Western Australian Young Chemists’ Society.

The IYCN has adopted a two-pronged definition that includes members based on an age (35 and under) and a career marker (five years following their terminal degree). ‘It’s an interesting question whether you go with “younger” or “early-career”. For us, the two are effectively synonymous,’ said Dr Lori Ferrins, Chair of the IYCN, Assistant Professor at Northeastern University (US) and Aussie expat. ‘I think for us it was about making sure that the people who need the support have the support that they want.’

Dr Monika Szabo, postdoctoral researcher at CSIRO and Chair of the Victorian Young Chemists’ Group, also finds the question more difficult to answer. Although she too gave a definition in years past a terminal degree, she added: ‘In one way, I think there needs to be a defined age group, because you’re still learning and you still haven’t got the experience, say, a younger researcher in their 40s might have.’

Whether we adopt a definition according to age or to career stage, this lack of experience is the greatest challenge that younger chemists encounter. ‘Everyone always wants to hire someone with experience, because they have the training,’ said Karin.

Finding opportunities to get that crucial experience is also challenging. ‘In this job environment, where it’s tougher than ever, and the competition is harder ... you have to put in a lot more effort than before to secure that entry-level job,’ said William Li, Chair of the New South Wales Young Chemists’ Group. William is a recent science and chemical engineering graduate from the University of New South Wales with a full-time job as a quality control chemist.

Renata Kucera, PhD student at Flinders University and Chair of the South Australian Young Chemists’ Group, disagreed. ‘I think that anyone at any stage of their career can have a hard time finding a job,’ she said.

The breadth of an undergraduate chemistry degree as opposed to the specificity of many jobs was identified as a pitfall for younger chemists. ‘I’ve only had the one role, but it seems to me that [the knowledge required by] every job is going to be intensely specific to that job,’ said an early-career analytical chemist who asked not to be identified. ‘I think having more industry exposure in university would be great.’

The pathway is no clearer for PhD graduates. Monika told us that she encounters many PhD graduates who wouldn’t know where to start looking for opportunities outside academia. And staying in research is no cakewalk either, she said: ‘It’s super hard to get funding for fellowships. It’s highly competitive.’

Many students think they need to spend years working internationally to establish their research careers at a time when many might wish to settle down. There is often too little support for early-career researchers to relocate. This is likely made worse for Aussie researchers because of our geographical inconvenience. ‘When I moved to Boston, I moved straight out of my PhD,’ said Lori. ‘There was no money for relocation, and I was broke when I got here. And it sucked.’

Some of the younger chemists we interviewed described problems that go beyond career obstacles. ‘My main concern is that I think younger chemists tend not to be taken very seriously,’ said Lori.

The early-career analytical chemist agrees. ‘Everyone loves fresh ideas ... but at the end of the day, people aren’t actually that willing to change their protocols and procedures,’ they said. ‘Especially because of a suggestion made by someone who hasn’t been at the company for a long time at all.’

Younger chemists may also feel as though their abilities are undervalued. Lori told us about having her skills underestimated by a senior colleague – only because she’s a younger chemist. William, too, described a stint as a junior chemist during which he was made to do low-skilled work he felt overqualified for. ‘Their justification was that I’m the least experienced in that section, and they’ve got no time to train me,’ he said.

Here, physical age may matter. ‘I was overlooked for a role purely based on the fact that one person ... said that I was immature,’ said the early-career analytical chemist.

Not all of the younger chemists we spoke to had experienced similar situations, however. ‘We were working on this project ... Just because I was less experienced, I didn’t get less work, and I didn’t get the easier work,’ said Renata. ‘I felt like I was always acknowledged and treated fairly.’

James Beckett, PhD student at the University of Queensland and Chair of the Queensland Young Chemists’ Group, saw a lack of experience  – whether perceived or real – as an advantage that younger chemists have over their senior counterparts. ‘They don’t have any preconceptions about what they should be doing or how things should be done,’ he said. This could translate to younger chemists being easier to train in new roles or skills. ‘[Later in your career] you might have more knowledge, but I think your ability to adapt to new situations is not quite as strong as someone who is fresh out of the gate.’

‘I think being a little doe-eyed translates to being a more conscientious worker, because you care about things more,’ added the early-career analytical chemist. ‘I’ve always been too eager to do more.’

‘I think that they [younger chemists] are motivated,’ agreed Lori. ‘They can see that there are issues that need to be dealt with, and I think that they have the driving force to be able to do it.’

Younger chemists might even have specific skills that established chemists lack. ‘Young chemists have grown up with technology and a lot more of us are fluent in technology, and that’s a big difference,’ said Karin. ‘Social media is very big as well now ... One benefit of having the Young Chemists’ Society is that we communicate to each other over Facebook, which means that everyone can make sure that they’re heard.’

The freedom to explore opportunities was also identified as an advantage younger chemists may have. ‘You’re still early enough [in your career] to maybe move from an academic environment to an industry environment,’ said Monika.‘You can take those risks to explore new things,’ Lori said. That could mean anything from moving around the world to choosing a start-up over an established multinational company – provided favourable personal circumstances and adequate support.

‘The IYCN is really aimed at bringing together younger chemists from all across the globe,’ agreed Lori. ‘One of the things that we’re trying to do is make sure that we can capture opinions not just from America or Europe, but all over the world.’

Younger chemists represent a different demographic in more ways than just by age. In 2018, the Royal Society of Chemistry reported that 44% of all chemistry undergraduate students in the UK were women, as opposed to 9% of professors. When considering how we can best support younger chemists, chemists must also recognise how they differ from previous generations in terms of gender identity, race, background, disability or sexuality.

A younger chemist is someone who is establishing their career in the chemical sciences. Anxiety about employment opportunities was a common thread throughout each of these interviews. Universities generally don’t illuminate many career pathways outside climbing the academic ladder. A younger chemist’s own lack of knowledge of the job market is matched by employers who might not even know what a chemist is. Finding even that entry-level job can be a hurdle.

The value of a recent graduate, a younger chemist, is not always clear – whether that is to employers, or to the younger chemists themselves. However, graduate chemists will have recently spent years showcasing their ability to learn and to adapt. Few could make it through that gauntlet of lab work, report writing and exam cramming without a passion for the science.

A younger chemist is someone whose knowledge and network may contain gaps. A younger chemist needs additional support from their peers and from mentors to find a foothold in their field of choice. Help offered respectfully by experienced and established chemists will be welcomed with open arms by each of the groups we spoke to.

As we’ve discovered while writing this article, a younger chemist is also welcoming to anyone who feels as though they might not fit the mould. ‘At the end of the day,’ said James, ‘There’s nothing to gain by excluding people based on their age.’

Anna Ahveninen MRACI (@Lady_Beaker) is a younger chemist and science communicator. Having recently left the RACI, she now works in communications at the Australian Academy of Science. Josh Marlow (@PhD_in_Training) is about to submit his PhD thesis on the topic of nanoparticles in liquid crystals, and has been working under Dr Rico Tabor at Monash University. 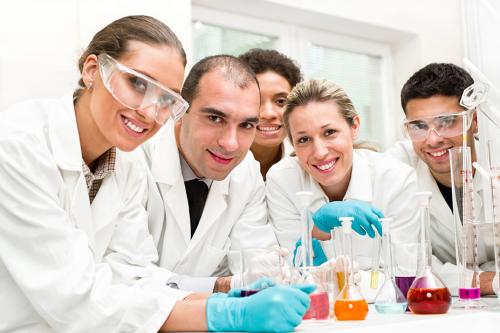 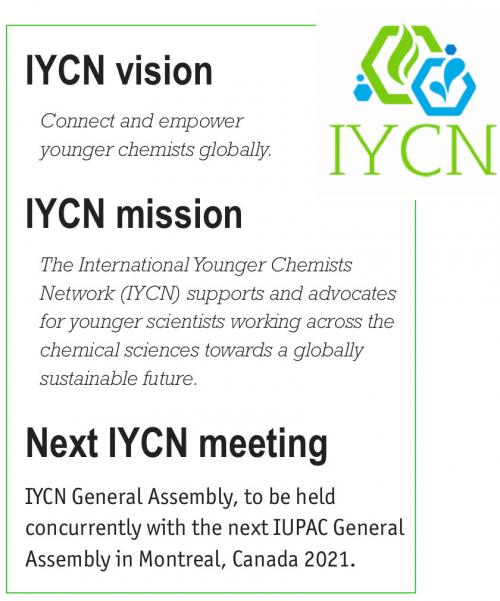 ... not everyone reaches the same career stage at the same age.