Researchers have extracted the molecules that power the majestic glowworm displays in New Zealand’s Waitomo Caves.

The creatures that produce the beautiful light shows at Waitomo are actually glowing maggots: the larvae of a type of fly called a fungus gnat. Always found close to water – they are called titiwai by Māori, a name that refers to lights reflecting in water – glowworms use their blue-green light to attract prey: tiny flying insects that become entangled in sticky threads that the larvae hang beneath them. There is only one species of glowworm found throughout New Zealand, Arachnocampa luminosa, but their cousins can also be found in Australia; eight different Arachnocampa species have been found across the east coast and in Tasmania.Many different organisms produce their own light, a phenomenon called bioluminescence. Perhaps the best-known are the glowing fireflies of the northern hemisphere and the jellyfish and dinoflagellates (plankton) in the sea. There are also glowing millipedes, bacteria, squid, fish, fungi and others.

Bioluminescence is always the result of a chemical reaction: a small molecule called a luciferin reacts with oxygen to produce light, and the reaction is always helped along by an enzyme called a luciferase. Most creatures have independently evolved their own systems, using luciferin and luciferase combinations that are chemically unique.

These various bioluminescent organisms have given us valuable tools for biomedical research. Osamu Shimomura shared the 2008 Nobel Prize for Chemistry for his discovery of green fluorescent protein (GFP) while investigating the bioluminescence of the glowing jellyfish Aequorea. With the aid of both GFP and luciferases, researchers have developed ways to watch processes that were previously invisible, such as the development of nerve cells in the brain or how cancer cells spread.

The chemistry and biochemistry of fireflies, which signal to each other with red or green flashes to attract mates, are very well understood. The luciferin and luciferase components have not only been studied in great detail, but are now produced commercially and used in a range of applications, including tracking where and when genes are turned on in cells, sequencing DNA, and detecting bacteria on hospital wards, all facilitated by producing a tell-tale glow.

Shimomura and other researchers started to study the biochemistry of glowworm bioluminescence in the 1960s and 1970s. They showed that this bioluminescence is also a luciferin–luciferase system requiring oxygen and adenosine triphosphate (ATP), one of the main energy molecules in all living organisms, and demonstrated that the glowworm luciferin was different from the firefly luciferin. However, the chemical composition of the luciferin and the identity of the luciferase remained unknown. We have cracked this longstanding challenge and published the results in Scientific Reports (https://goo.gl/uRkBKZ).

Our first task was to collect enough glowworms to enable us to purify the glowworm’s small luciferin molecule and solve its structure. Fortunately, there is a large population of glowworms only 2 kilometres from the University of Otago. These were picked individually from cold, wet, forested gorges at night, and from inside caves.

The tiny glowworm lanterns, measuring just 1–2 millimetres long, then had to be dissected from the larvae to get the best yield of crude luciferin. All of the extraction and purification work had to be done quickly while excluding oxygen as much as possible.

We then isolated the luciferase enzyme and carried out genetic analyses. These revealed that the firefly and glowworm luciferases belong to the same family of enzymes. This means that although fireflies and glowworms evolved their abilities to make light entirely independently of each other, they both co-opted enzymes from the same family to do the job. This is an example of convergent evolution at the molecular level that had not been previously seen with any other bioluminescent enzymes.

At first our team was unable to purify the luciferin itself, but a breakthrough came when liquid chromatography–mass spectrometry analyses showed that the common amino acid tyrosine and the insect metabolite xanthurenic acid were both major components in semi-purified glowworm extracts. Putting pure samples of these together with a glowworm extract containing luciferase, along with other glowworm proteins, gave the brightest light we had measured in this project. Tyrosine is a part of some of the luciferins in other organisms, but xanthurenic acid had never been found to be part of any other luciferin.

By combining pure tyrosine and xanthurenic acid (from other sources) with crude extract containing glowworm luciferase, we were able to purify about ten-millionths of a gram of a luciferin-related compound. This glowed brightly in a luciferase test assay. Mass spectroscopy and nuclear magnetic resonance spectroscopy on this tiny unstable sample yielded enough information to propose a possible structure that is unlike any of the other known luciferins.

The next task is to work with synthetic chemists to make this luciferin-related compound in the laboratory and definitively prove if it, or a related chemical, is the glowworm luciferin. Doing this will uncover another of nature’s mechanisms for converting chemical energy into light. Further work on producing functional glowworm luciferase in cell cultures would then be needed to provide a distinct bioluminescence toolkit for laboratory use. These efforts will be boosted by collaborating on the related Australian Arachnocampa glowworms with Associate Professor David Merritt of the University of Queensland. 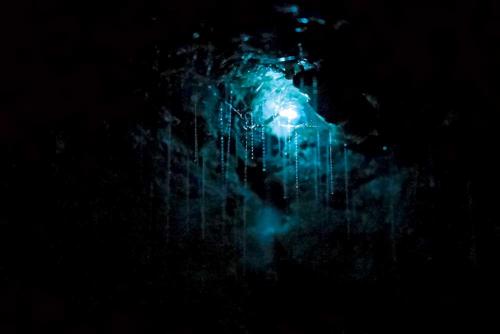 A glowworm in the Waitomo Caves hangs sticky threads to catch insect prey.

The general mechanism of bioluminescence, which can be separated into functional components in the laboratory. The colour depends on the particular luciferin (small molecule) and luciferase (large molecule enzyme) reaction of the glowing organism.

Bioluminescence is always the result of a chemical reaction ... luciferin reacts with oxygen to produce light ... 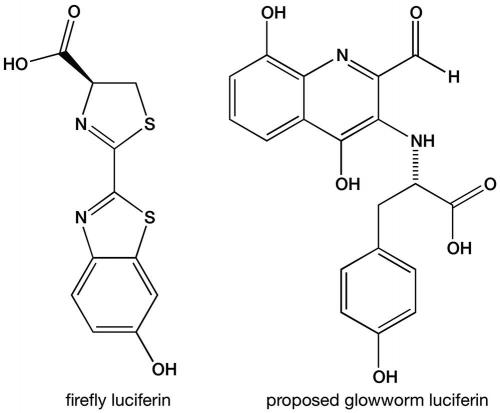 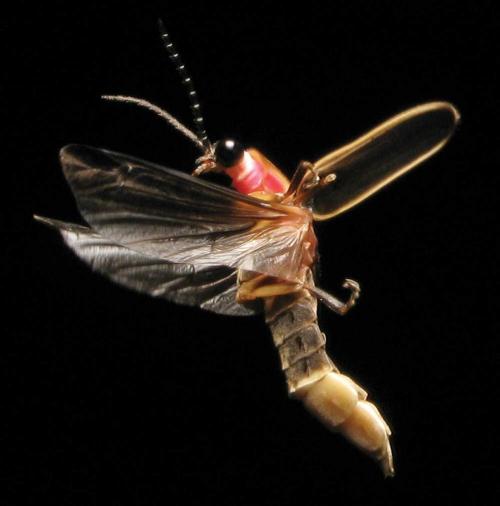 Although fireflies and glowworms evolved their abilities to make light entirely independently of each other, they both co-opted enzymes from the same family to do the job.