A century and a half ago, a set of symbols, carefully arranged in rows and columns, was published. The 'collection’ was incomplete and the gaps hinted at undiscovered relatives.

The periodic table of the chemical elements has become perhaps the most recognisable symbol of chemistry. Printed on various merchandise hoarded by chemists and enthusiasts, the periodic table proclaims passion for chemistry or the sciences as a defining character trait or, depending on who you ask, as membership of the nebulous ‘nerd club’. As pop culture has turned to embrace science and other aspects of this club, the symbolism of the periodic table is no longer limited to the sciences, elevated instead into a general sign of shared interests. Google images is awash with collections of boxes arranged in a vaguely familiar shape, claiming to be the periodic table of dragons, meat, musical instruments, wrestling, magic, dumbbells, epic reads, swearing, cryptocurrencies, alcoholic drinks, languages and more.

Most of these ‘periodic tables’ misunderstand or misrepresent the nature of the original. Presenting the periodic table as an inventory, most of the imitations boil down to a collection of all the things someone could think of that belong to a certain category, presented in boxes. The periodic table of chemical elements is, however, part of a much bigger and more complex picture.

It’s true that the periodic table does act as a list of every known element. Even this simple fact contains some useful knowledge, because the need to list or tabulate the elements follows from an understanding that they are somehow fundamentally distinct. The question of how they can be distinguished opens the gates to discussions of chemical and physical properties, and their relations to various configurations of subatomic particles. The atomic number, atomic mass and isotopes are fundamental concepts to explore when determining elemental identity, while the more adventurous guides to the periodic table may also wish to discuss the role of radioactive decay in transforming one element into another.

The shift to the next layer is subtle – from ‘How are the elements different from each other?’ to ‘How do the elements relate to one another?’ However, it’s a significant distinction: this is where we begin to lose the creators of the periodic tables of magic, meat and more. It is not because Dmitri Mendeleev arranged all the known elements in an aesthetically pleasing manner that he is remembered 150 years later.

That comprehensive list of the elements described earlier is only fit to be called a ‘table of the chemical elements’. The periodic system, for which the periodic table is named, looks beyond the distinctions between individual elements and considers them instead as a continuous whole. Looking at elements 1–118, this does not appear so difficult, but to account for continuity by ascending atomic number, a list would be sufficient. What is the function of the table? The periodic system, as reflected in the structure of the periodic table, reveals elemental relationships: groups (columns) of elements that perform similar chemistry thanks to their valency, and trends within periods (rows) of elements in electronegativity, ionisation energy, atomic radius and more. The realisation that elements belong precisely at their given location on the periodic table because of their relationships to the elements around them is what unlocks an understanding of the periodic table as an indispensable tool. Because of this property of the periodic table, much can be inferred about the chemistry of an element just by its position on the table – patently untrue of almost all of its imitations.

Although this United Nations International Year of the Periodic Table of Chemical Elements celebrates Dmitri Mendeleev’s contributions to the periodic table, the periodic system was not a sole invention of his. The concept of periodicity was first contemplated by French chemist Alexandre Béguyer de Chancourtois, who noted that the atomic masses of elements with similar properties varied systematically. Yet, a plaque from the Royal Society of Chemistry at his place of birth attributes instead the ‘discovery of the Periodic Law for the chemical elements’ to English chemist John Newlands, a contemporary of Mendeleev’s, and another of the many early chemists who sunk their teeth into the problem of rationally organising the elements. Newlands, Mendeleev and German chemist Julius Lothar Meyer all made attempts at tabling the elements around 150 years ago. This is a fact often forgotten in the celebration of any historical scientist – the romantic notion of an earth-shattering Eureka moment by a single genius, I would venture, has never actually been true.

Given his contemporaries – of which surely only some are remembered – working on the problem, why is only Mendeleev celebrated as the ‘father of the periodic table’? Perhaps what captures public imagination even today was his role as elemental Nostradamus. Where earlier attempts to table the elements by John Newlands kept to a periodic pattern only by occasionally cramming two elements into a box, Mendeleev recognised that there were gaps in his knowledge and accounted for them. Not only did his periodic table contain spaces for as-yet-undiscovered elements, he also confidently made predictions on their properties, including atomic mass, melting point, valency and even the probable method of discovery. As these spaces began to be filled in the proceeding years, these predictions proved startlingly accurate, and Mendeleev’s position in the canon of modern chemistry was secured.

Of course, there have been many refinements to this early work over the years. Mendeleev’s original periodic table is not the one we find on Google images today. Noble gases didn’t appear on the table until 1904, when William Ramsay received the Nobel Prize in Chemistry (and Lord Rayleigh the corresponding prize in physics) for the discovery of this new class of elements. Having had no way to quantify the atomic number until Henry Moseley’s work to measure nuclear charge by X-rays in 1914, Mendeleev and his contemporaries also arranged the table by atomic mass – although Mendeleev allowed some exceptions in his table due to the properties of the elements. Much later, work on the Manhattan Project prompted Glenn Seaborg to propose the inclusion of the actinide series, while proceeding research in radiochemistry eventually led to the filling of the seventh period with the unstable, mostly laboratory-made transuranium elements.

History shows us that the development of the periodic table has been intrinsically linked with fundamental advances in chemistry since the 19th century. As Mendeleev’s predictions show, the periodic table has been a map for the elemental explorers of the world, telling them where and how to look. Even now, with the seventh period completed by oganesson, theoretical chemists are considering how far the (debatable) stability of superheavy elements can stretch, and how these hypothetical additions would fit into the periodic system.

What is perhaps most frustrating about the imitation periodic tables is that basic information about the periodic system and its significance is quite easy to find and understand. Chemists much more knowledgeable than me will have noticed that I have been terribly non-specific in describing the construction and uses of the periodic table. Even all this information reaches only the second layer of complexity, after all.

Peeling away the groups and the periods, we enter a layer that may be inaccessible to the non-chemically inclined. Underneath the relationships between elements with their neighbours, we find a term by which inorganic chemists in particular sometimes identify their area of interest: the block. Although even the most ardent defender of chemical knowledge may concede that there is no real benefit to a non-chemist being able to name the blocks, there is still an appreciable elegance to being able to put fences around particular sections of the periodic table for particular kinds of chemistry – thanks to chemical properties bestowed by electronic orbitals.

It isn’t my intention to detail what the periodic table is and how it can be used – only why it matters. The periodic table quietly and succinctly encompasses many of the principles that make chemistry work. But wait, there’s more, for it also represents some of the core tenets of science: a marriage of theory and experiment, the periodic table embodies a rich history of scientists probing the edges of current knowledge. I wonder if, 150 years ago, Mendeleev could imagine his periodic table growing quite so far – and I wonder whether we can envision the ways it could still transform, 150 years hence?

The periodic table has become a symbol of chemistry because in so many ways, it is chemistry. In this International Year of the Periodic Table, we chemistry professionals have an opportunity to spark the imaginations of those previously dismissive of our discipline. In 2019, let us not be the silent central science, but instead proudly proclaim our profession, and that most of the modern world’s technological advances, food security and medicines exist because of us. 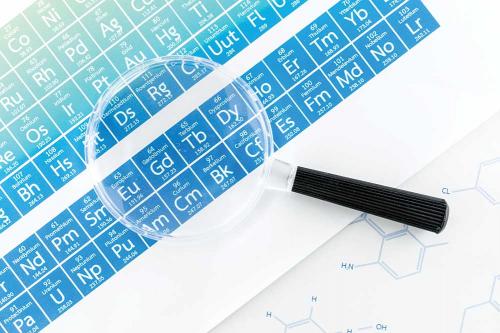 ... Mendeleev recognised that there were gaps in his knowledge and accounted for them.

... there is still an appreciable elegance to being able to put fences around particular sections of the periodic table for particular kinds of chemistry ...