In his last, posthumously published, book Stephen Hawking wrote that the public doesn’t believe experts. As examples, he cited the Brexit referendum, and many of the decisions made by the Trump Administration in the USA. He included scientists among the experts, and discussed the implications for the environment of this community distrust.

While the climate change debate is often cited as an example where the science is not understood or believed, I was reminded, during a recent homeward commute, how other matters of environmental interest are also affected by this phenomenon. In separate programs, ABC Radio broadcast two discussions on whether or not to cull wild animals. One was related to control of sharks in the Whitsundays, after a Melbourne man had been killed. The other dealt with feral horses (brumbies) in the Kosciuszko National Park. Scientists were among the interviewees in each report, and both relied on their knowledge of the relevant science to support their case. As it happened, they were on different sides of the ‘cull or don’t cull’ argument in each report. Dr Jane Williamson from Macquarie University’s Marine Ecology Unit was against culling sharks, and Dr Jamie Pittock from ANU was in favour of culling brumbies.

Dr Williamson argued that there is insufficient information to demonstrate that shark culls improve safety. She also questioned whether there was any data to support the fishers’ observations about shark numbers. Dr Williamson proposed what are, effectively, risk-management approaches to minimise the opportunities for harmful interactions between humans and sharks.

Conversely, Dr Pittock used science arguments to support the culling of brumbies, something that has the backing of the Australian Academy of Science. Dr Pittock cited clear evidence of the damage being done to the National Park. However, opponents of culling were having no truck with the science, and used cultural heritage arguments to support their case. In this, they invoked the ‘iconic’ status of brumbies in European Australian culture, attributable to A.B. (Banjo) Paterson’s poem The man from Snowy River. They also argued that the preferred culling method, aerial shooting from a helicopter, was inhumane because of the difficulty in obtaining a clean kill shot. Concern for animal welfare had an element of being science-based, it seemed to me.

However, what was clear in both cases was that the general community was not prepared to meekly accept that the scientific arguments were equally compatible with their own local knowledge, and in response to this, Dr Pittock suggested that scientists had to engage on the same emotional level as the brumby advocates. He suggested that the beauty of the natural environment, and the damage done by introduced species, become a focus in arguing for a cull.

Control of feral animals, and managing their interactions with humans and the natural environment, was brought closer to home about a month after these broadcasts. There was a dead deer on the side of the main road not far from my home on the outskirts of Melbourne. I was aware that there had been deer sightings in the district, but this was my first encounter. There is a hot debate on local social media about what should be done. One side favours protecting the native bush from the deer; the other side uses the ‘don’t shoot Bambi’ argument. Apart from my sighting of deer road kill, there have been other reports of deer using creek-side bush corridors to travel to less bushy suburbs and running amok by wandering into the path of cars. Locally, deer are stripping bark from native trees. Aside from concerns for the native vegetation, there are risks involved with human interactions with feral deer. A person is unlikely to be injured in a direct encounter, because the deer will avoid the human; injury or death in a traffic accident involving a deer is a more probable outcome.

Shooters’ organisations are keen to assist with culling. Licensed shooters would need a police permit to shoot on private land, and authorisation can be obtained from the relevant government department to shoot on public land. The police permit is required because of the proximity of houses, which is understandable, because a stray bullet from a high-powered rifle is not acceptable around residential areas. In all this, it has been apparent to me that there is a key element of risk management to be addressed, and another animal whose behaviour needs to be managed – Homo sapiens. 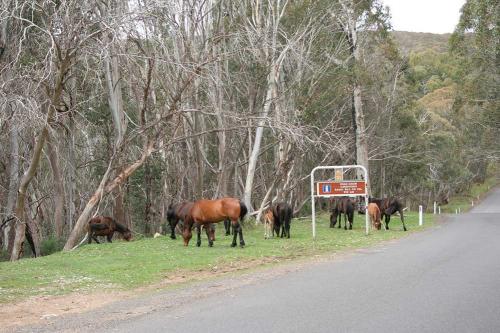