Alchemy and chemistry – lifelong fascinations of a literary great

Although Goethe is best known for his literary achievements, he wanted to be remembered as a philosopher and scientist – but this was not to be.

I have been interested in Johann Wolfgang von Goethe’s works for more than 50 years. It may have been in my blood even longer. After reading Goethe’s book Elective affinities,* I began an exploration of Goethe’s scientific work, beginning with alchemy.

Johann Wolfgang Goethe was born in Frankfurt am Main in 1749. His father was a wealthy lawyer, who was able to live a life of leisure with his family, travelling and collecting books and paintings. His mother, Katharina Elisabeth née Textor, was the daughter of J.W. Textor, several times Bürgermeister (mayor) of Frankfurt. Young Goethe was home schooled until age 16 and was expected to follow his father into the law, which he did reluctantly.

As is often the case, his university experience at Leipzig, which had been the centre of Germany’s literary revival, presented him with many distractions. It was there that Goethe developed an interest in alchemy, and where the first of his many romantic attachments failed. Following two bouts of serious illness, he began a more detailed study of alchemy while recuperating, before moving to Strasbourg to continue his law studies. All the while he had been writing poetry, prose and a play – the last said to be revenge for his spurned love. His doctoral dissertation, on a subject from ecclesiastical law, which questioned the status of the Ten Commandments, was judged to be scandalous and was rejected. He then successfully took the oral examination for the licentiate in law, which allowed him to practise and use the prenominal Doktor.

C.A. Burland asserts in The arts of the alchemists (Macmillan, 1967) that Goethe’s attitude to scientific work was to seek a unity in all of nature. Three types of alchemy are identified by R.D. Gray in Goethe the alchemist: a study of alchemical symbolism in Goethe’s literary and scientific works (Cambridge University Press, 1952): transmutation (changing base metals into gold); a symbolical representation of mystical doctrines; and a projection of the unconscious mind, leading to an integration of the personality, as proposed by C.G. Jung. Gray concludes that Goethe was principally concerned with mysticism, but later in life logic eclipsed mysticism for him.

We learn that, following his recuperation, Goethe established a laboratory in the Frankfurt house and carried out experiments such as heating white flints (quartz) from the river Main with sodium hydroxide to produce sodium silicate (Liquor Silicium), a result that had been achieved by others more than 100 years earlier.

While in Strasbourg, Goethe made the acquaintance of Johann Gottfried Herder, a young literary intellectual, who encouraged his literary talent and introduced him to the works of Shakespeare. Alas, another brief and intense romantic attachment with a young woman failed. Goethe returned to Frankfurt, where he started a legal practice but was soon overtaken by literary opportunities and he started reviewing for a new journal, the Frankfurter Gelehrte Anzeigen (Frankfurt Review of Books). In 1774, Goethe achieved a major literary success with the publication of his book Die Leiden des jungen Werthers (The sorrows of young Werther) at age 25, soon translated into French and English. Many believe the book was partly autobiographical.

In the same year, Goethe met Carl August, the young prince of the Duchy of Saxe-Weimar-Eisenach. Two years later, at the invitation of the prince, Goethe moved to Weimar where he was appointed to the ruling privy council. The duchy had few resources and Goethe was given the task of rehabilitating a long defunct silver mine. During this time, he learned much about mining and geology. Ultimately, the mine was not successful due to flooding and the poor quality of the ore. In addition to his duties with the Mines and Highways Commissions, he joined the War Commission and in 1782 he became the Duchy’s Exchequer.

In recognition of his high offices and exemplary service, the prince raised Goethe to the nobility and in 1782 he became von Goethe. His interest in mysticism continued but his literary output declined markedly and in 1785 he resigned from the privy council and his other duties. Simultaneously, he rediscovered his interest in geology and discovered new interests in botany and anatomy. He tried to interest the professors at the university in Jena in his scientific work, but they were less than enthusiastic. Here was a man, approaching his 40th birthday and still unmarried, who had abandoned his employment, who had shown great literary promise, but whose prospects suddenly looked decidedly grim. He then received an offer to publish his complete works in eight volumes, but after accepting it he found that many of his literary projects were incomplete and would require substantial effort to enable publication. Almost in despair, he decided to escape to Italy (which had been part of his father’s life plan for him). It was in Rome he sat for Tischbein, who painted Goethe in the Campagna (1787).

Goethe was somewhat disappointed with Rome. While the architecture and artworks were stimulating, he found he derived greater pleasure from his belief that he was experiencing an ancient way of life, in harmony with nature. But it was in Sicily he found the ultimate pleasure, stemming from its early Greek culture. He returned to Weimar in 1788, where his mentor the prince excused him from administrative duties and implored him to devote all his energy to poetry.

On 19 October 1806, Goethe married Christiane Vulpius, with whom he had been in a relationship for many years. She had previously given birth to their only surviving child, August, on Christmas Day 1789. At their wedding, there was no reception and Goethe is said to have spent the rest of the day with the French invading officers! Nevertheless, they were devoted to each other and thereafter lived a quiet and happy domestic life in Weimar, until Christiane’s death on 6 June 1816.

Goethe had almost completed his work on the collection late in 1788. Thereafter, his literary career seemed to go down hill and he reached out again to science. He published a theory of botany and tried to extend it to anatomy before elaborating his theory of colour, which contradicted Newton, and did not gain acceptance. In 1791, Goethe took on the management of the Weimar court theatre, more his forte.

From about 1800, Goethe began a collaboration with J.W. Döbereiner, who later became professor of chemistry and pharmacy at the University of Jena. Together, they investigated a wide sweep of technological chemistry, but made no attempts at commercialisation. Aspects of alchemy and chemistry are mentioned in Goethe’s literary works: Faust, Wilhelm Meister and Dictung und Wahrheit. Goethe is honoured in the name of a crystalline form of hydrated ferric oxide, goethite and the plant Goethea cauliflora.

In 1809, Goethe published his third novel, Die Wahlverwandtschaften (Elective affinities), which had been written during Napoleon’s occupation of the region following the Battle of Jena, a short distance from Weimar. It took its title from Swedish chemist Torbern Bergman’s 1775 textbook, A dissertation on elective attractions. Ever since, Goethe’s book has been studied, analysed, discussed, dissected and interpreted in many different ways. The prevailing view is that it was a metaphor for human relationships.

The book observes the behaviour of a young married couple, Charlotte and Eduard, Eduard’s friend the Captain and Charlotte’s orphaned and beautiful niece, Otilie, brought together in a big house surrounded by idyllic gardens, describing their interactions in terms of the alchemic laws of chemical affinity.

The house and gardens are likened to a chemical retort, in which the human elements are brought together, allowing the reader to observe the resulting reactions, including the critical double displacement reaction.

In 1817, Goethe saw his son August married, while continuing to write in Weimar. To secure the family finances, he commissioned a final edition of his collected works (then having grown to 40 volumes), including additions to his autobiography and a second volume of Faust.

Belgian artist René Magritte painted his interpretation of Elective affinities in 1933, and in Günter Grass’ first novel, The tin drum (1959), the central character Oskar refers to Goethe’s book for guidance.

Goethe is revered by Germans to this day. He is recognised as the greatest of the German poets, and an influential novelist and playwright. Tischbein’s painting is said to be immediately recognisable to most German people. Others have described him as the German equivalent of Shakespeare, while many saw him as a gifted polymath. His literary contemporary Friedrich Schiller called him a genius. That the German language became widely read and spoken among educated Europeans is attributed to Goethe. Today, the worldwide Goethe Institute continues to promote German language and culture. His literary output was prodigious.

At times, Goethe gave the impression that he wanted to be remembered primarily as a scientist. But his studies in alchemy, chemistry, physics, botany, geology and anatomy were not taken seriously and he was never able to achieve the recognition as a scientist he craved. Goethe is credited with discovering the premaxillary bone in the human skull. But it is his literary works, rather than his scientific excursions, that are today still held in high esteem.

﻿* The terms elective affinities and chemical affinities, suggesting attraction, were used by chemists from the 18th century to explain how substances interacted with each other. The concept gave rise to numerous affinity tables, the best known of which is due to E.F. Geoffroy (1718). Affinity has since been displaced by the term free energy.

Peter G. Lehman FRACI CChem (pglconsulting@bigpond.com) joined the RACI as a student member in 1963. He pursued a career in industry in Australia and the US, with interludes in academia. He served as editor of Chemistry in Australia (1981–4) and in retirement he has written articles for the magazine. A reference list is available upon request to the author. 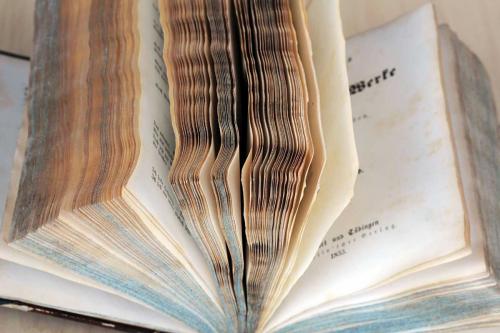 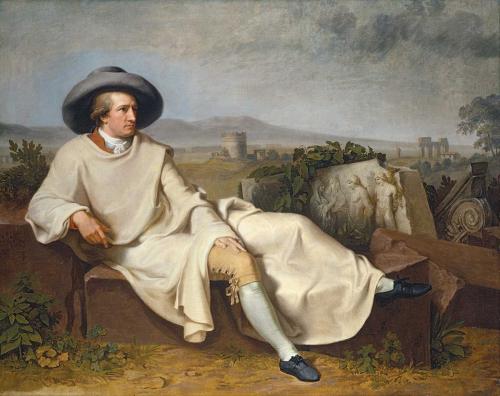 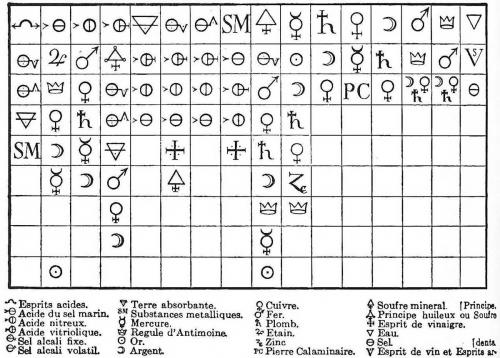 Étienne-François Geoffroy. ‘Table des differents rapports observés en chimie entre différentes substances’. Memoirs of the Royal Academy of Science 1718, pp. 202–12. At the head of each column is a substance with which all the substances below it can combine. 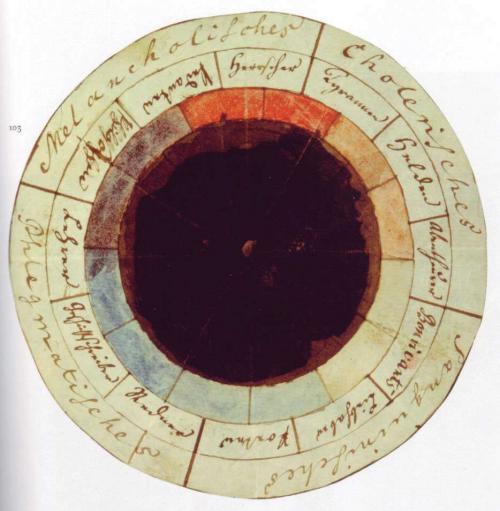 Temperamentenrose (‘rose of temperaments’) is a 1798–9 study by Goethe and Schiller, matching 12 colours to human occupations or their character traits (tyrants, heroes, adventurers, hedonists, lovers, poets, public speakers, historians, teachers, philosophers, pedants, rulers), grouped in the four temperaments. Goethe had a great interest in how colour is perceived. Although physicists largely rejected his work Theory of colours, it was somewhat influential in the arts world.

Goethe is revered by Germans to this day. He is recognised as the greatest of the German poets, and an influential novelist and playwright. Tischbein’s painting is said to be immediately recognisable to most German people.

He published a theory of botany and tried to extend it to anatomy before elaborating his theory of colour, which contradicted Newton, and did not gain acceptance.