Some clever chemistry is employing magnetism and a light-sensitive soap to turn simple graphene into a super-material with applications in water purification and electronic devices.

It’s almost impossible to pick up a scientific publication at the moment without reading something about graphene or one of its carbon cousins, including nanotubes and buckyballs. Graphene itself is simply an individual layer of the common mineral graphite – the black material in pencil lead – pure carbon atoms bonded together in an ultra-strong hexagonal pattern.

A significant proportion of graphene’s appeal is that it retains graphite’s electrical conductivity due to a phenomenon known as delocalisation, where some of the electrons that each carbon atom brings are shared throughout the structure and act as charge carriers. In fact, perfect sheets of graphene are exceptional conductors of both electricity and heat, making them an exciting proposition for the next generation of electronic devices.

However, it’s still a major technological challenge to make large quantities of graphene. The forces that hold the layers together are strong, and to overcome them requires a lot of mechanical energy. This was first memorably achieved by literally peeling layers off using tape, although this method doesn’t scale well to produce larger amounts. An alternative to the mechanical approach is to use some clever chemistry, and this is where graphene oxide comes into the picture.

Graphene oxide is a version of graphene that has been oxidised – the sheets have been decorated with oxygen-containing functional groups. This is normally achieved chemically through the use of strong acids and oxidants, and has two important effects.

First, the conductivity of graphene is lost when all of the bonds to oxygen are formed, which is a problem if you want to make transistors and electronic devices. Second, adding all of that oxygen means that the sheets formed are hydrophilic.

Water is therefore able to penetrate between the layers, breaking apart the graphite structure from within and removing the need for mechanical peeling of the sheets.

We can, however, reverse the oxidation process by adding a chemical reducing agent to graphene oxide. A common choice for the reductant is hydrazine, an unusual and very unstable compound of hydrogen and nitrogen that’s widely used in rocket fuels (although it’s much safer when dissolved in water). This chemical can aggressively strip away the oxygen, returning graphene oxide to something much more like pure graphene, and offering a much less mechanically demanding route to ‘graphene’.

However, the restoration is not perfect. Some defects and oxygen or nitrogen atoms remain in the sheets, and the conductivity never quite returns to that of pristine graphene or graphite. The material thus produced is usually known as ‘reduced graphene oxide’ to make this distinction clear.

However, graphene oxide and reduced graphene oxide have a slew of useful properties of their own, mostly because they can be dispersed easily in water. As they retain a great deal of their carbon character, these materials love both water and oils, so they can be used instead of conventional emulsifiers to disperse oil in water.

Emulsions made using particles to stabilise their interfaces are known as Pickering or Ramsden emulsions, and are renowned for their extraordinary stability and shelf-life. Where graphenes are used as stabilisers, such emulsions might find applications in recovering crude oil from offshore reserves, and cleaning up oily spills from soil and water.

Perhaps even more usefully, graphene oxide is a brilliant adsorbent. This means that a wide array of molecules stick to graphene oxide in water, from pharmaceuticals, toxins and dyes to heavy metal ions like mercury and cadmium. This is not really surprising, as the most commonly used adsorbent in water treatment, activated carbon, looks chemically a lot like graphene oxide, with many of the same groups and bonds present. However, the benefit of graphene oxide is that peeling apart graphite into single layers that are one atom thick provides the greatest surface area possible – you get maximum adsorption capacity for your carbon buck!

So it sounds as though graphene oxide is the next supermaterial for water treatment – it’s easy to make, captures all manner of toxins, and offers an astonishing surface area for every gram of carbon used.

But there’s one tiny problem. The sheets created by the oxidation process are generally just a few microns across and only one atom thick. While this means they’re easy to disperse stably in water, and hence can rapidly capture toxins and contaminants, getting them back is a challenge.

The usual methods for recovering tiny particles, such as filtration or centrifugation, don’t work well because the graphene oxide sheets are simply too small. Adding sticky polymers to ‘glue’ the sheets together and grab them works well, but this means that they can’t be recycled and reused.

An appealing strategy to overcome this stumbling block is to find a way that external fields or stimuli can be used to capture graphene oxide, bringing it – and any adsorbed contaminants or toxins – crashing out of water for easy collection and treatment. One way to achieve this is to use tiny iron oxide particles that also stick to the graphene oxide sheets. These particles are readily made to be magnetic, so applying an external magnetic field gathers up the particle-laden carbon materials.

Handily, the surface charge of the iron oxide particles can be reversed with pH. At neutral conditions, the particles have an opposite charge to the graphene oxide sheets. Since opposite charges attract, they stick strongly.

After the magnet is applied and the graphene oxide – rendered magnetic by the adsorbed iron oxide particles – has been captured, adjusting the pH to slightly basic switches the iron oxide charge to negative. This means that the particles have the same charge as the graphene oxide sheets and spontaneously jump off, so that both materials can be collected, treated and recycled back into the process.

However, it’s not just solid particles that can be used to capture graphenes. By using a small amount of a light-sensitive soap, the same effect can be achieved. The soap molecules contain a chemical group called azobenzene, which has the unique property of being able to change its shape and properties when illuminated with light of a specific wavelength.

Blue light makes the soap stick to carbon nanomaterials, increasing their stability in water. Violet light causes the soap to dissolve into the water, decreasing the graphene’s stability and separating it for collection and treatment.

The handy part is that the soap’s properties are completely reversible, so the system can be switched back and forth repeatedly with no loss of function.

Whether you use light or magnets to capture them, it’s clear that graphene and its family of related carbon nanomaterials are here to stay. They each have a unique set of properties that makes them valuable and appealing as the next generation of materials for water treatment and electronic devices.

We are now at a pivotal point where industry is realising the potential of this ‘black gold’, so you may start seeing more of the graphene family in your daily life!

Rico Tabor is a senior lecturer at Monash University’s School of Chemistry. This article is reproduced from Australasian Science (austscience.com). 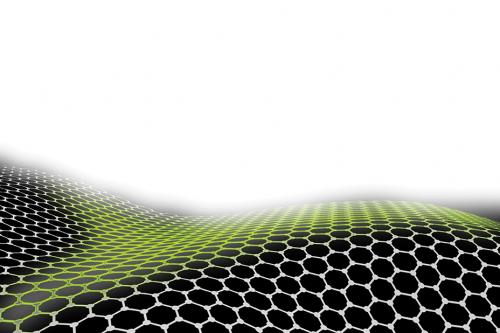 The addition of a magnetic soap to reduced graphene oxide allows light to capture and redisperse the material.