Rare: the high stakes race to satisfy our need for the scarcest metals on Earth

Rare: the high stakes race to satisfy our need for the scarcest metals on Earth provides fascinating insights into the world of rare metals: where they come from,; what they are used for, who controls the supply chains, what the recycling prospects look like, and where we might look to finding future supplies of scarce metals. Author Keith Veronese is a scientific writer with a strong background in chemistry. He has written a fine book, which is readily intelligible to any interested adult, irrespective of scientific literacy.

Some metals are very rare indeed. Estimates are there is only about 500 grams of promethium on Earth. As Veronese put it, this is about enough to ‘fill the palm of a kindergartner’s hand’. (Now, there’s a unit you won’t find in your conversion tables!) If there were enough of it, it would make useful atomic batteries.

The book is brim full of interesting bits of information. For example, the London murder of the Russian defector Litvinenko, using polonium-210, is discussed along with speculation that Yasser Arafat may have received the same treatment. Thallium was a widely used rat poison until recent times and was equally efficacious for knocking over the odd spouse or in-law. The antidote is fairly straightforward: a few glassfuls (Ah! Now there’s another odd unit!) of Prussian Blue solution. The only possible drawback is bright blue motions, which, while exciting, is unlikely to kill you.

Thulium would be a good contender for use in brachytherapy. Palladium can be used in dentistry, for crowns and the like, so that instead of being ‘as flash as a rat with a gold tooth’ one could have a gleaming silvery smile. Even tungsten has been known to be buried deep within gold bars to fool the unwary. If you have a flash of inspiration about recovering gold from seawater, then I’m terribly sorry to disillusion you. Between the world wars, Hitler put Fritz Haber on this task as a way of getting money to pay war reparation debts. It didn’t work. And then, we all know about square-planar platinum compounds for chemotherapy, but did you know it is also used in breast implants to help the implant hold its shape?

If you fancy getting into the business of recovering gold and other rare metals from your old computer (well, really, you’d need a decent heap of scrap computers), Veronese tells you how you can do it in the garage. My only comment is that although it is possible, you would be extremely foolhardy and breaking just about every environmental and OHS law you can imagine. Alas, of course exactly these horrors accompany much of the computer recycling/recovery operations in the Third World. If you are interested, Veronese refers to the classic 1940s book by Caroline M. Hoke, Refining precious metal wastes: a handbook for the jeweller, dentist and small refiner. This book is still obtainable. You can download it free, but be warned. The version I first tried to download brought with it a plethora of Trojan horses and sundry other nasties.

So, what are we to do when we get really, really short of the rare metals that, let’s face it, are pretty essential to our lifestyles and wellbeing? Veronese discusses ways some of them could be recovered from spent nuclear fuel rods. There are very real difficulties in doing this and in getting a product that is totally free of radioactive contamination. Other options canvassed include mining on the Moon, Mars or nearby space rocks. Possibly, these activities are somewhat speculative. What seems to me rather less speculative, and quite depressing really, is the possibility of mining on the Antarctic Continent. Currently, the Antarctic Treaty forbids mining. What it doesn’t forbid is geological mapping and surveying of the continent. I am pessimistic for the longer-term future of the beautiful wild world to our south, particularly when the treaty comes up for renegotiation.

All in all, this is a very informative and enjoyable book. It is well written and easy to read and there is much to be learned from it. It is highly recommended reading for anybody interested in the rare and obscure metals that underpin modern life. 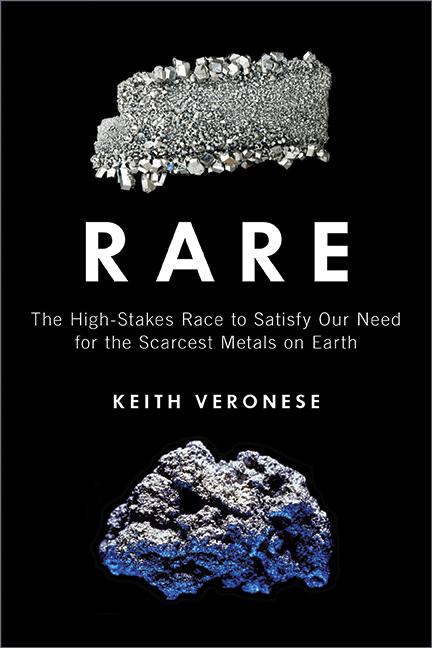