In a recent issue of Science, John Hartwig and colleagues from the University of California, Berkeley, USA, described how to use a newly designed catalyst to add functional chemical groups to the hardest of the carbon–hydrogen bonds to crack.

Dr Raphael Oeschger discovered a new version of a catalyst based on iridium that opens up one of the three C–H bonds at a terminal methyl group and inserts a boron compound, which can be easily replaced with more complex chemical groups. The new catalyst was more than 50 times efficient than previous catalysts and just as easy to work with.

To prove the utility of the catalytic reaction, Dr Bo Su and co-workers used it to add borane to a terminal, or primary, carbon atom in 63 different molecular structures. The borane can then be swapped for any number of chemical groups. The reaction specifically targets terminal C–H bonds, but works at other C–H bonds when a molecule doesn’t have a terminal C–H.

He said that chemists could also add new chemical groups to the ends of organic molecules to prepare them for polymerisation into long chains never before synthesised.

‘It could enable you to take molecules that would be naturally abundant, biosourced molecules like fatty acids, and be able to derivatise them at the other end for polymer purposes.’

Chemists have long tried to make targeted additions to C–H bonds, a reaction referred to as C–H activation. One still unachieved dream is to convert methane – an abundant, but often wasted, by-product of oil extraction and a potent greenhouse gas – into methanol, which can be used as a starting point in many chemical syntheses in industry.

In 1982, Robert Bergman first showed that an iridium atom could break a C–H bond in an organic molecule and insert itself and an attached ligand between the carbon and hydrogen. While a major advance in organic and inorganic chemistry, the technique was impractical – it required one iridium atom per C–H bond. Ten years later, other researchers found a way to use a single atom of iridium or other transition metal, such as tungsten, as a catalyst, to break and functionalise millions of C–H bonds.

In 2000, Hartwig, a graduate student with Bergman in the late 1980s, published a paper in Science describing how to use a rhodium-based catalyst to insert boron at terminal C–H bonds. The boron could be easily replaced with other compounds. Subsequent improvements to the reaction and changing the metal from rhodium to iridium, allowed some manufacturers to synthesise drugs by modifying different types of C–H bonds. But the efficiency for reactions at methyl C–H bonds at the ends of carbon chains remained low, because the technique required that the reactive chemicals also be the solvent.

The new catalytic reaction allows chemists to stick chemicals in nearly any type of C–H bond. In the reaction, iridium snips off a terminal hydrogen atom, and the boron replaces it; another boron compound floats away with the released hydrogen atom. The team attached a new ligand to iridium – 2-methylphenanthroline – which accelerated the reaction by 50–80 times over previous results.

Hartwig acknowledges that these experiments are a first step. The yield of the reactions varies from 29% to 85%. But he is working on improvements. 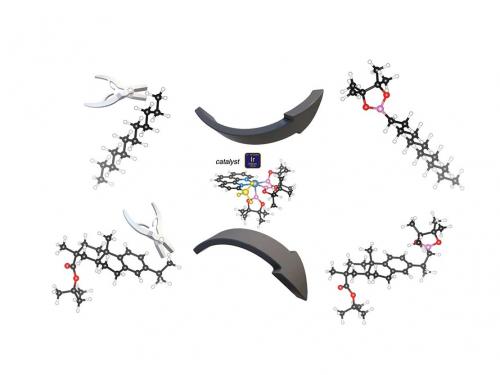 A catalyst (centre) based on iridium (blue ball) can snip a hydrogen atom (white balls) off a terminal methyl group (upper and lower left) to add a boron–oxygen compound (pink and red) that is easily swapped for more complicated chemical groups. The reaction works on simple hydrocarbon chains (top reaction) or more complicated carbon compounds (bottom reaction). The exquisite selectivity of this catalytic reaction is due to the methyl group (yellow) that has been added to the iridium catalyst. The black balls are carbon atoms; red is oxygen; pink is boron.