A short city tour of Melbourne

Trevor McAllister leads the way between some of Melbourne CBD’s great buildings.

If you’re a congress participant from out of town, then welcome to Melbourne! Please forget the tourist slogans ‘Marvellous Melbourne’, coined by a visiting English journalist in the 1880s, and ‘The world’s most liveable city’, a trite assessment by the business travellers of the Economist. Come with me, instead, on a personalised journey through a select part of the city where I have lived for 48 years.

Just board the northbound 109 tram outside the Congress Centre, which will take you across the river. On the other side of the river, you pass on the left the place where the first settlers (from Tasmania) landed on 30 August 1835 – now called Enterprise Park, after the name of their ship. After a block, the tram will turn right into Collins Street.

Three blocks along Collins, you pass through the 1880s banking district, of which the Gothic Bank, on the left at the corner of Collins and Queen, is the most remarkable, designed by William Wardell, one of Melbourne’s leading ‘Gothic Revival’ architects. The financial boom of the 1880s led to a great crash in the 1890s, but it has left us these amazing buildings. Get off the tram two intersections further, near Swanston Street. Take the pedestrian crossing to the left and then cross Swanston Street to the Melbourne Town Hall. The Town Hall itself is a fairly typical neoclassical building of the 19th century. Its foundation stone at the corner was laid by the then Duke of Edinburgh in 1867 (the second son of Queen Victoria). For many years, the auditorium was the home of the Melbourne Symphony Orchestra until the new Arts Centre was built across the river in 1982.

Turn and look back across Swanston at one of the most remarkable buildings in Melbourne, the Manchester Unity. This marvellous example of Art Deco ‘Commercial Gothic’ was designed by Marcus Barlow and opened in 1932. The narrow vertical lines of the windows, the terracotta tiled façade and the tower are reminiscent of the Chicago Tribune building of 1927. One of Melbourne’s most select apartments is located in the tower. Next to the Manchester Unity is the Capitol Building, also inspired by the Chicago style, by the architect Walter Burley Griffin in the 1920s, when he and his wife Marion Mahoney were living in Melbourne and designing the Commonwealth capital, Canberra. From 1901 to 1927, the capital of the Commonwealth of Australia was in Melbourne.

Cross Collins Street to the corner of Swanston and Collins, the site of one of our planning failures, the so-called City Square. This unpromising space was once the site of the magnificent Queen Victoria arcade, which was demolished in a notorious act of civic vandalism in 1960. It and the Regent Theatre remained empty for decades, under a building union ban, until a deal was done to restore the theatre and build the Westin Hotel, which now overlooks the rather meagre Square. Note the statue of Burke and Wills, the two explorers who perished in the north Queensland outback in 1860.

Walk south along Swanston towards Flinders, pausing to look across at the Nicholas building, a 1920s building in the ‘Commercial Palazzo’ style. Alfred Nicholas was a St Kilda pharmacist who was given the right to manufacture aspirin in Australia during the 1914–18 war against Germany, when the Bayer patents had been expropriated as enemy property by the government of Billy Hughes. Some of the Nicholas fortune went into this building, designed by Harry Norris. It has a lovely arcade roofed in art deco glass tiles. Continue to the intersection with Flinders Street. St Paul’s Cathedral is on your left, built in 1890 but replacing a church of the 1840s. Overcome any religious prejudices you may have and go inside to enjoy the stained glass windows, made in England by Clayton and Bell in 1887.

Diagonally across the intersection is Flinders Street Station, which has many legends attached to it, one being that the design was a mistake, originally intended for Bombay (now Mumbai). But this remarkable example of ‘Edwardian Baroque’ is firmly fixed in Melbourne’s social history. The clocks under the arch have been a meeting point since its opening in 1910. When the timetables of the various train lines went electronic, on screens inside the station, it was proposed to remove the clocks, but an outcry caused the authorities to relent. Cross Flinders to Federation Square, created in 2001 (100 years after the federation of the colonies to form the Commonwealth of Australia). The conservative citizens of Melbourne did not like the modern architecture of the square when it opened, but they have grown used to it, and it has become the genuine city square that Melbourne had lacked since its foundation in 1835. The colours of the angular metal pieces of the façade mimic the colours of older stone facades in nearby buildings on Flinders Street.

Continue over the river, across Princes Bridge, to the Arts Centre on your right, cross to the National Gallery of Victoria (1968), go inside past the famous water wall to the Great Hall at the back of the entrance lobby and enjoy another stained glass experience, the ceiling of the Great Hall, a modern design by the local artist Leonard French. You need to lie flat on the carpeted floor to appreciate it properly. Unlike the thin, leaded, medieval type of stained glass in St Paul’s, these ‘windows’ are of coloured slabs of glass, a style called dalle de verre by the French glassmakers who introduced it in the 1930s. This ceiling is one of the greatest stained glass works in the world.

Take the tram or walk back over the Princes Bridge, get off at Young and Jackson’s Hotel (1860) and turn left into Flinders Lane where you will come on Centre Place on the right, and Degraves Street on the left, two of the most photographed laneways in the city with many al fresco cafes. Turn right and go through Centre Place and the Centre Walk building to Collins Street. Take the pedestrian crossing, turn left at the other side and walk along to the Block Arcade. This gem of an arcade, a copy in miniature of the Galleria Vittorio Emmanuel in Milan, dates from 1890, and with its tessellated floor and high windowed Victorian shop fronts is probably the most photogenic of Melbourne arcades. On the right is the Hopetoun Tea Rooms, which were started by a charity chaired by the wife of the governor of the day, Lady Hopetoun, and are eternally popular. Walk through Block Arcade to the rotunda where the arcade turns left, and take the small laneway on your right, which will allow you through to Little Collins Street. Cross the street to the Royal Arcade (1867). The tiled floor and Victorian shop fronts, plus the clock with the Gog and Magog statues, make this a strong competitor with the Block for the title of most loved arcade in the city.

Turn back into Little Collins Street, and turn left to Swanston. Take the tram or walk left along Swanston Street for two blocks to the neoclassical portico of the State Library of Victoria (on the right). The forecourt in front of the library (dating from 1856) is one of the great gathering points in the city, and the start of many demonstrations (I confess to have been in quite a few in recent years). The empty forecourt, on a Sunday morning in 1960, was the location of the last scene of the quietly grim On the Beach movie (directed by Stanley Kramer and starring Gregory Peck and Ava Gardiner) about the end of the world after a nuclear war. So dull was Melbourne in those days that Ms Gardiner is reputed to have said ‘It’s a great place to make a movie about the end of the world’. We trust that her ghost has returned to view a very different city! You should take time to enter the library and go to the La Trobe Reading Room, one of the great library domes of the world.

Return along Swanston Street, walking or taking the tram one stop to Bourke Street. Cross Swanston to the Bourke Street Mall. This pedestrianised strip was the subject of a typical Melbournian stand-off in planning in the 1980s. As a result, the Tramways, being the most intransigent of the parties, managed to maintain the running of trams though the mall. Avoiding these, walk along to the 1930s Myer Emporium, another example of ‘commercial gothic’. Alongside, on the corner with Elizabeth Street, is the General Post Office (GPO, 1867–87), forgotten now but once the point of telegraph communication with the rest of the world.  It is also remembered as the sad location in 1880 of the death of the artist S.T. Gill, the famous goldfields sketcher, who drew the often reproduced ‘Doing the Block’ of the fashionable class parading in Collins Street.

And this is where you can catch the 96 tram, proceeding west to return to the Congress Centre on the river.

Trevor McAllister FRACI CChem trevormc@internode.on.net is retired and enjoying life after science as a tour guide at the Melbourne Museum and the State Library of Victoria.

What’s on in July in Melbourne 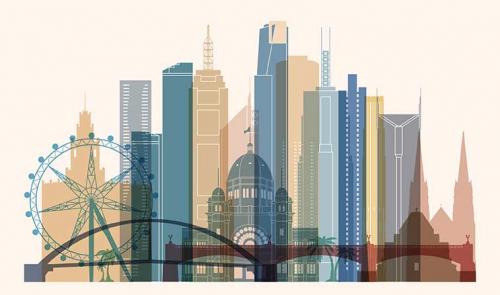 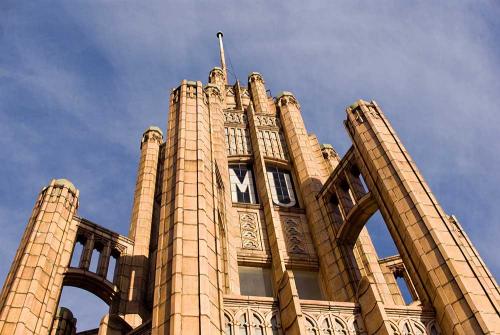 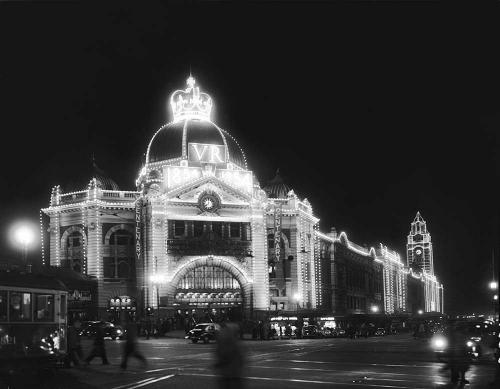 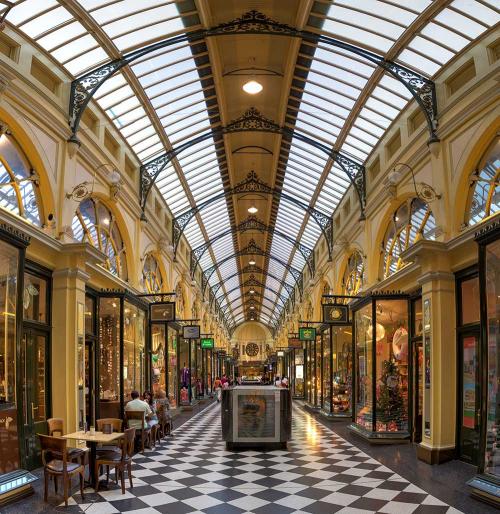 Turn and look back across Swanston at one of the most remarkable buildings in Melbourne, the Manchester Unity.

When the timetables of the various train lines went electronic, on screens inside the station, it was proposed to remove the clocks, but an outcry caused the authorities to relent.