Thirty years in the life of Chernobyl caesium

Early on 28 April 1986, alarms sounded as an employee of the Forsmark nuclear power plant in Sweden set off a radiation detector on his way back from the bathroom. Radioactive particles on his shoes were soon identified as being Soviet (bit.ly/1rfZwYi). The fuel used and the operation and design of a nuclear reactor partly determine the radioactive nuclides produced – a signature of the power plant of origin. Soviet authorities had no choice to announce, two days after the event, the disaster at the Chernobyl plant in the Ukraine.

The Chernobyl disaster is now 30 years behind us, and during those years the radioactivity attributable to caesium-137 has decayed to half of its original level. Caesium-137 is a troublesome fission product because caesium’s most common chemical compounds are salts, which can move easily through natural environments. Being an emitter of gamma rays, caesium-137 is convenient for mobile detection.

In September 2014, a sample of reindeer from Jotunheimen in southern Norway was found to contain a surprising 8200 Bq/kg of caesium-137. Levels in that region two years before had been as low as 1500 Bq/kg. (The regulatory limit in Norway for caesium-137 in reindeer meat is 3000 Bq/kg.) So why the increase with time? Lavrans Skuterud of the Norwegian Radiation Protection Authority (NRPA) thinks that a long and bountiful season for mushrooms, of which reindeer are very fond, may be the answer (bit.ly/1rPzNqq).

Species such as the gypsy mushroom (Cortinarius caperatus) are effective accumulators of caesium-137, and they’re a popular food for people as well as reindeer. Scandinavian authorities recommend that residents limit their intake of C. caperatus. Mushrooms have been suggested as a way to remediate radiation-contaminated sites, although the economics of such work throws their feasibility into question.

Regulatory thresholds for radionuclides vary significantly between countries and have been revisited worldwide since the Fukushima Daiichi nuclear accident in Japan in 2011. Thresholds in any country must account for the frequency of consumption of different foodstuffs by residents. Scandinavian authorities also consider the impact of thresholds on indigenous peoples such as the Sami – these people consume more reindeer meat and they make a living by reindeer herding, including selling meat. The NRPA has been testing radioactive caesium levels in reindeer herders since the 1960s.

Location and weather conditions (e.g. elevation, snow, rain and wind) during nuclear tests and accidents affect the distribution of radioactive fallout. Reindeer delicacies such as mosses and lichen have been tested as biomonitors in order to create a regional map of fallout from Chernobyl in Norway (bit.ly/1rfTBCu).

And what of the people of Chernobyl? Despite the exclusion zone restrictions within 30 kilometres of the ill-fated Reactor 4, it seems people have to return to their homes, catching local fish and harvesting mushrooms. 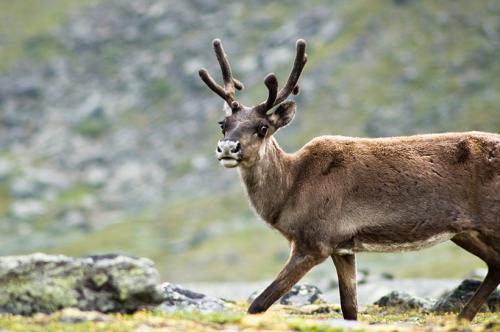