Still some X about X-rays

In late 1927, the Commonwealth of Australia placed an order with the Belgian Radium Society for 10 grams of the radioactive substance, at a cost of ₤100 000. There was some opposition from people who thought it should have been sourced from the Australian Radium Corporation, but it did not have stocks on hand from its Mt Painter mine, and there was a sense of urgency, brought on by demands for its use in the treatment of cancer, so we settled for material ultimately coming from the Belgian Congo.

Several batches of tubes containing the ‘hot’ substance arrived in Melbourne over the next few months. Armed guards accompanied them from the ship to the vaults of the Commonwealth Bank until the Health Department could take delivery of them. A Commonwealth Radium Laboratory was established, in conjunction with the Department of Natural Philosophy at the University of Melbourne, where the Professor of Physics, T.H. Laby (1880–1946), had already established an X-ray laboratory for the Commonwealth.

Following the Australian Cancer Conference in 1935, these two sources of radiation were brought together in the Commonwealth X-ray and Radium Laboratory and a building was constructed for it on the Parkville campus. The officer in charge was Cecil Ernest Eddy (1900–56), whose research with Laby had involved X-ray fluorescence (XRF). Eddy had followed the trail of other Laby MSc graduates, going to Cambridge to work with Rutherford in the Cavendish Laboratory, but he didn’t like it there and preferred to continue his studies in Melbourne where he was awarded the DSc in 1930. His biographer described him as a man who was ‘good company and enjoyed a beer with friends’.

Once X-rays were introduced into medicine, it was realised that the dose of radiation was important, and various schemes were introduced for ensuring that the patient received the Goldilocks ('just right') amount.

A major contribution was made by French physician and mycologist Raymond Jacques Adrien Sabouraud (1864–1938), who early in the 20th century was using X-irradiation to treat ringworm infections. His dosimeter consisted of cardboard discs (known as pastilles) covered with barium platinocyanide Ba[Pt(CN)4] (barium tetracyanoplatinate). This is the substance that led Wilhelm Conrad Röntgen (1845–1923) to deduce that invisible rays were being produced in his electrical experiments and causing fluorescence of a nearby screen coated with the platinum compound. Sabouraud realised that the platinum salt showed reversible colour changes when irradiated with X-rays, from yellow-green through yellow, orange and brown, then back again when the irradiation ceased. The colour of a test pastille was compared with standards prepared with measured amounts of radiation.

George Gabriel Stokes (1819–1903), who introduced the term ‘fluorescence’, observed in 1853 that the crystalline solid shows bright green fluorescence but is inactive in solution. It became a common component of optical experiments, hence its presence in Röntgen’s laboratory. More recent researchers attribute a number of its optical properties to Pt–Pt interactions within the crystal lattice, where tetracyanoplatinate anions are stacked face-to-face. Despite modern interest in this substance, the chemistry of its reversible colour changes remains a mystery. It is spectacular stuff, as you can see from the photographs, one under normal light and one under ultraviolet, kindly provided by Dr Zheng Zhao of Southeast University in Nanjing, China.

This tale started for me on a lazy afternoon spent in a library that overlooked part of the University of Melbourne campus, where I noticed a building being demolished. On the campus map, it was labelled ‘old radiation lab’ and I realised that it was the old X-ray and Radium Laboratory. While I watched, the demolition waste and the machinery were being checked with a counter, and I was just in time with my camera to see the worker’s feet being checked, as you can see in the accompanying photograph. 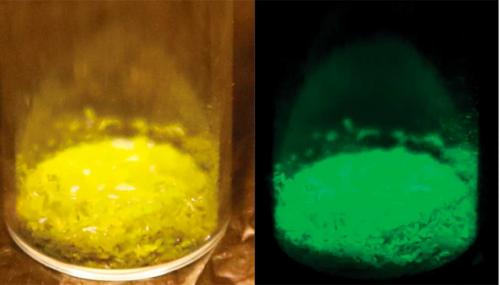 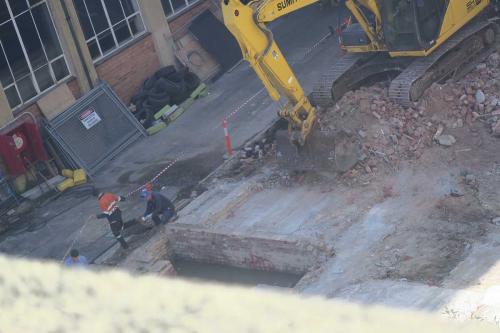