In the May 2012 grapevine column, Geoff Scollary summarised what was then known about the impact of bushfire smoke on grapes and wine. Since then, the frequency of bushfires has increased, with the 2020 summer fire season affecting many Australian grape-growing regions. More recently, US grape and wine producers in Oregon and California have had to manage the effects of fire and smoke. Professor Kerry Wilkinson from the University of Adelaide is a lead researcher of ‘smoke taint’ and provides an update here.

Early research identified volatile phenols (and their glycoconjugates) as chemical markers of smoke taint, developed analytical methods for their quantification, and investigated the sensory impact of grapevine smoke exposure on wine. Factors affecting the intensity of smoke taint, including the timing and duration of smoke exposure, fruit maturity at harvest and skin contact time during fermentation, were also established.

Most grape and wine producers rely on commercial laboratories for compositional analysis to determine whether fruit is smoke tainted. When multiple regions are simultaneously affected by fires, as happened in Australia during the 2019–20 growing season, and more recently in California and Oregon, demand for analysis creates sample backlogs and significant reporting delays are experienced. This undermines decision-making prior to vintage and highlights a need for rapid diagnostics. Commercial sensors that measure particulate matter concentrations can be used to monitor the occurrence of smoke exposure in the vineyard. The absence of smoke gives industry confidence to proceed with harvest, and when smoke is detected, the density and duration of smoke exposure informs the need for chemical analysis of fruit. Spectral sensors are also being evaluated as rapid methods for quantifying grapevine exposure to smoke and could provide options for in-field applications using unmanned aerial systems (drones) or even optical berry sorting in the winery. Spectral analytical techniques (e.g. Fourier transform, near- and mid-infrared spectroscopy) may enable rapid screening of smoke-affected grapes, to prioritise those samples in need of more detailed compositional analysis by GC-MS and LC-MS/MS.

In the vineyard, various protective sprays (e.g. anti-transpirants, grape ‘sunscreen’ and even a synthetic phospholipid cuticle ‘biofilm’) have been evaluated as strategies for mitigating exposure of grape bunches to smoke. Unfortunately, many of these sprays actually facilitate the uptake of smoke and, therefore, exacerbate the problem. Where promising results have been achieved, these strategies still rely on sprays being applied to grapevine foliage before smoke exposure, which may not be feasible, depending on the proximity of the fire to the vineyard (i.e. because of the inherent OH&S risks).

An in-canopy sprinkler system used to alleviate heat stress by ‘misting’ the grapevine bunch zone during heatwaves was evaluated as a strategy for mitigating smoke adsorption by grapes, in a manner akin to how rain cleanses aerosol pollutants. However, misting during the application of smoke to grapevines did not significantly influence the sensory perception of smoke taint in the resulting wine. Previous attempts to ‘wash’ smoke-affected grapes (with water, aqueous ethanol or milk) did not affect the concentration of smoke taint marker compounds, demonstrating their rapid diffusion into berries. However, trials are underway (in California) to determine whether washing ash from grapes might prove beneficial.

The amelioration strategies identified a decade ago (i.e. adding activated carbon or using nanofiltration and solid phase adsorption to remove smoke-derived volatile phenols from wine) remain the most effective strategies for amelioration to date, and are still used by wineries to treat smoke-tainted wine. However, novel adsorbents and treatment processes are being evaluated, including molecularly imprinted polymers, ozonation and distillation, and a recently funded Cooperative Research Centre Project, led by Cassegrain Wines in collaboration with the University of Adelaide and several industry partners, will continue to explore strategies for ameliorating smoke taint.

Smoke taint remains an ongoing challenge for grape and wine producers around the world. Australia is world-renowned for expertise in the science of smoke taint, but as fires have continued to affect global wine regions, researchers from Canada, the US, Chile, South Africa and Europe have strengthened efforts to overcome the impacts of bushfires on grape and wine production.

Kerry Wilkinson (kerry.wilkinson@adelaide.edu.au) is a professor of oenology at the University of Adelaide – a role that enables her to combine her passions for wine education and wine research. Her primary research interests concern the chemistry of grapes and wine, but she is best known for her research into the impacts of grapevine exposure to bushfire smoke. https://researchers.adelaide.edu.au/profile/kerry.wilkinson 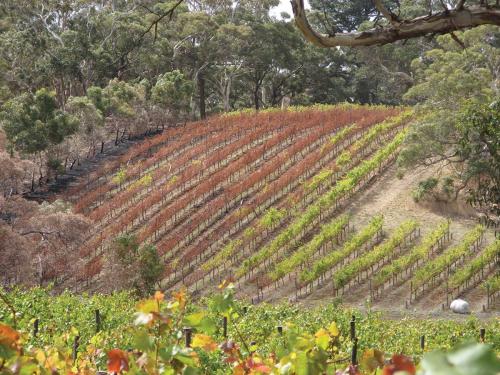