There’s no reason to leave your scientific curiosity at home when you take a holiday.

Charles Darwin gave us more than On the origin of species. He invented science tourism. What else should we call a five-year voyage aboard a sailing ship with stops in over 20 ports of call? On shore, Darwin roamed the local countryside, collecting thousands of souvenirs. He called them ‘specimens’. He even wrote a travel memoir that was hugely popular at the time and remains in print.

Today, we can do something similar. The Royal Geographical Society, PolarTREC and WiseOceans are just a few of a growing number of tour providers willing to help us realise our inner Indiana Jones.

To see what is on offer, I went exploring on the Earthwatch Institute website and quickly found an archeological expedition in Mongolia. If I signed up, I would be working under the direction of expert archaeologists, helping them excavate artifacts left behind by the inhabitants of the Ikh Nart oasis as early as 9000 years ago. At the campsite, I would be staying in a traditional Mongolian yurt where a cook prepares meals and I could try traditional Mongolian baked goods and evening meals, including fermented mare’s milk and a Mongolian barbecue.

For a growing number of people, this is a fun way to spend a few weeks. Mind you, these trips are not cheap. Two weeks on the Mongolia dig is US$3000 – but it is a bargain compared to some of the more exotic tours and expeditions.

If getting your knees in the dirt and drinking mare’s milk are impractical or a bit too extreme for your taste, there are more traditional tour formats with a strong scientific theme. In the coming year, Australian Geographic Travel With Us is offering expeditions to the Kimberley Coast, an Aboriginal Art Air Tour, a Southeast Asia Expedition and (my favourite) In Shackleton’s Footsteps.

Shackleton’s Antarctic expedition of 1914–17 was one of the more colourful episodes in a tradition that began in the 1700s with the explosive interest in science and reason we now call The Enlightenment. Along with trade and conquest, scientific curiosity became a new motive for exploration. Darwin’s Beagle comes about halfway down a long list of scientific voyages aboard military vessels that begins with HMS Dolphin in 1764 and continues to this day. Take Australia’s Department of the Environment and Energy and their ongoing program of scientific research under their Antarctic Division. Unfortunately, they don’t offer tours, but they do have a terrific website, giving us all the opportunity to be armchair Shackletons.

Touring has its own long tradition. Part of the Enlightenment experience was the Grand Tour. Aristocratic young men were routinely packed off with a knowledgeable guide and tutor to absorb the classical roots of Western civilisation in the capitals of Europe and, no less importantly, to meet and greet their fellow aristocrats. Those with a genuine thirst for knowledge could network with the great minds of the day. The tradition declined with the growth of rail and steamship travel and when Thomas Cook introduced mass tourism with the Cook’s Tour.

Mass tourism today has become the mainstay of more than a few national economies and has splintered into scores of submarkets catering to every imaginable interest. You can pursue your interests in science through agri, atomic, eco, geo or nature tourism. Sadly, there is no chemical tourism.

Tourism doesn’t have to mean ‘holiday’, not if you think of it as ‘knowledge-oriented travel’. If you travel extensively for work, consider combining business and pleasure. Just check with your tax accountant what you can claim.

Few trips combine business and pleasure better than the professional conference. You may already know the website chemistry.conferenceseries.com, which lists upcoming conferences around the world by country and topic.

Just for fun, let’s see what’s on in France.

In 2017, there will be no less than 29 international chemistry conferences in Paris alone. The World Congress on Natural Products Chemistry and Research sounds like it has wide appeal. That’s in October. It is a bit cool and wet in October, but it is off season, so you will get better prices and shorter queues anywhere you venture beyond the conference venue.

Whatever the month, if you are travelling to some distant shore, it makes sense to extend your trip a day or two to take in a bit of culture and a dash of science as I did when I once attended a conference in Townsville. I presented a paper, I learned a lot, and I met new colleagues with whom I stayed in contact for some time afterwards on a professional basis. It would have been a huge lost opportunity to travel all that way from Bangkok and not visit one of the wonders of the natural world, the Great Barrier Reef. I stayed on one more day for a snorkelling tour and consider it a great investment.

Years later, on my way through Paris to a science meeting in Montpellier, I arranged two extra days in Paris to visit the Louvre and the Jardin des Plantes, France’s main botanical gardens. That was November and the Louvre was practically deserted. At the Jardin des Plantes, there just happened to be a lecture on entomology that day. I am not particularly interested in entomology, and I understood about every fifth word of the lecture, which was in French of course, but I do love history. The thrill was to be sitting in a lecture that was part of a series dating back to the time of Georges-Louis Leclerc, Comte de Buffon, the man who became curator of the gardens in 1739.

These little layovers were well worth the extra personal expense – and no, you are not skiving off if you do them on your own time and at your own expense. You may even be able to claim a tax deduction for the cost of attending seminars, conferences or education workshops that are clearly connected to your work activities. This can include formal education courses provided by professional associations. Check the Government of Australia website for details.

Even if you can’t add any time to your trip, it’s not unusual to have the better part of a day waiting for your flight home. What better opportunity for a quick trip to some of the world’s great science museums.

Science museums have been around for ages. The Natural History Museum in London was established in 1881 and the Academy of Natural Sciences in Philadelphia goes back to 1812. Closer to home is Te Papa Museum in Wellington. While not strictly a science museum, it has huge collections of fossils and archaeozoology, plant and bird specimens, not to mention the largest giant squid specimen in the world. Most major cities have a science or natural history museum. All you need to do is type ‘science museums’ in your browser, or go to the Wiki science tourism site, and that takes care of what to do before departure time.

Few of the museums or science centres I have visited in person or virtually have displays or activities specifically about chemistry. I see a huge opportunity here for chemistry education. Many museums and science centres have travelling road shows and are looking to develop exciting displays.

Also on the lookout for exhibitions is the soon to be opened Nobel Center in Sweden. Museum directors from around the world, including the director of the Australian Centre for the Moving Image in Melbourne, met this year to discuss future exhibitions.

And, finally, there is the chemistry of tourism itself.

Tourism can be a great economic boon to a city, region or country, but there is growing concern about its social and environmental costs. In her recent book Tourism and oil, Susanne Becken, Director of the Griffith Institute for Tourism at Griffith University, discusses the impact of oil prices on tourism.

Becken’s book looks mainly at economic implications, but it is a good jumping off point for chemistry. For example, any assessment of tourism-related environmental impacts on water, air, soil or waste products would benefit from inexpensive and easy-to-use rapid chemical test kits. UK tourism researcher Louise Twining-Ward teamed up with New Zealand Aid, Samoa Visitors Bureau and the South Pacific Regional Environment Facility to publish an Indicator handbook (bit.ly/2eiKVpt) that lists eight environmental concerns. Only one, water quality, comes with a chemical test.

For inspiration, we could look at mobile and web-based apps like iStreem, a resource that predicts the concentration of chemicals used in ‘down-the-drain’ cleaning products, or the Good Fish mobile app you can use to guide your choice of sustainably harvested seafood. Imagine the impact of even a small percentage of travellers refusing to order the fish because it doesn’t show up on the sustainably harvested list.

Australia is host to eight million visitor arrivals every year. About half come for holidays and the rest for business, education and visiting friends and relatives. In 2015, visitors spent $36 billion in Australia, an average of about $4500 per visitor. Adding a ‘knowledge’ orientation to tourism would not only bring in a few extra dollars, it would help make tourism more sustainable.

The UN has declared 2017 to be the International Year of Sustainable Tourism for Development. Three of the Sustainable Development Goals (8, 12 and 14) explicitly address tourism. Conspicuous by its absence is chemistry. Now would be a good time to fix that and, in the process, raise awareness of the recently published Decadal Plan for Chemistry.

I can see it now: the Grand Australian Chemical Trail.

Terry Clayton is a freelance commercial writer, blogger and educator with a wide range of interests in the physical sciences and humanities. See more of Terry’s work at www.terryerle.com.

CSIRO hosts an annual Science Bootcamp, offers tours and events, and has a discovery centre in Canberra. Science- and nature-oriented tours: 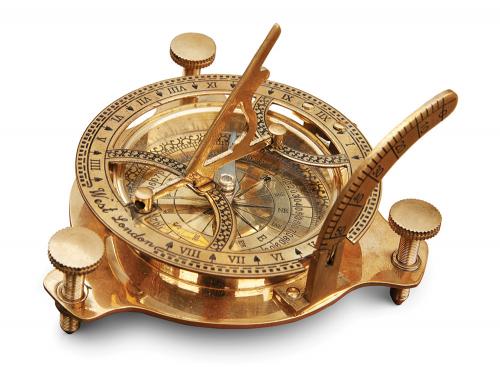 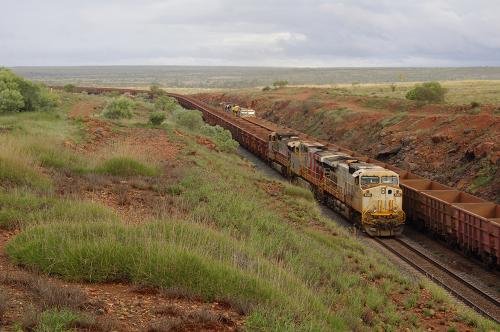 A resources tour in the Pilbara, south of the Kimberley region in Western Australia, is a fascinating insight into Australia’s iron ore mining industry.

A 1932 statue of Sir Ernest Shackleton stands outside the London headquarters of the Royal Geographical Society. 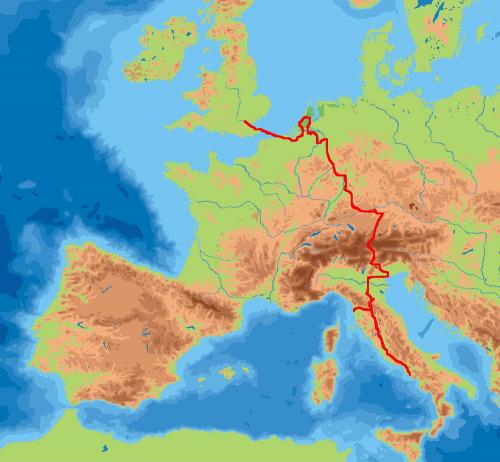 Beginning in the mid-17th century, the developing idea of travelling for curiosity’s sake was realised in the form of the Grand Tour of Europe (a typical route is shown). Scientific instruments were among the many souvenirs of these adventures. 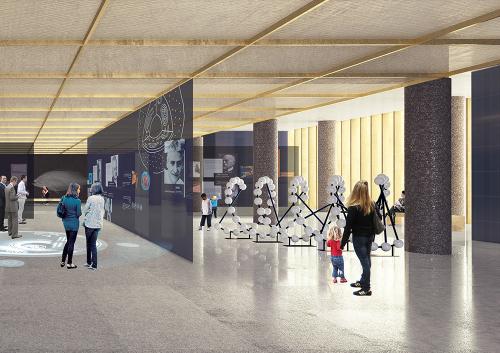 The architects’ impression of a Nobel Center exhibition space.

Whatever the month, if you are travelling to some distant shore, it makes sense to extend your trip a day or two to take in a bit of culture and a dash of science ...