The chemistry of everything

As a scientist primarily interested in the chemical and biological sciences, I find it hard to go outside and not be reminded of the sheer beauty and complexity of the natural world. Studying and understanding just a small fraction of its chemical processes gives me sheer and humbling joy.

James Kennedy, a chemistry educator in Victoria, shows just how chemically complex something simple can be in his series of ingredients lists for fruits. His ingredients list for a blueberry (bit.ly/2r9chH4) contains around 80 different chemicals. James notes also that ‘thousands of minority ingredients including DNA have been omitted for brevity’s sake’.

The family holiday snap shown was taken recently on the west coast of Tasmania, in the little town of Queenstown. For a fun exercise, and hopefully without ruining the magic of the photo, I am going to describe some of the chemistry pictured. (Beyond, that is, the obvious chemistry between the two people on the left.)

Clouds are made up mostly of liquid water and ice, but can contain other chemicals. They are formed when the water level, temperature and pressure are just right. In Tasmania, we have a large hydroelectric system, which relies on rainfall. Rainfall, of course, requires the presence of clouds! Research in Australia has shown that it is possible to use a simple and readily available chemical to assist in the formation of clouds, and increase rainfall over a target area. Known as cloud seeding, planes are used to disperse silver iodide, which promotes the formation of ice crystals and water droplets. This has been shown to be an effective technique in increasing rainfall, and importantly has been shown to be safe for humans and the environment. More information including links to research on cloud seeding can be found through the Hydro Tasmania website (bit.ly/2qz7Cj3).

Researchers at Texas A&M AgriLife recently reported that the smell of freshly mown grass is due to a combination of chemicals released by the grass as a stress response. The grass is, essentially, yelling for help and activating its protective mechanisms to help it survive the trauma of being cut open (bit.ly/2sk5S9L). The researchers hope that they can learn more about drought tolerance of plants through studying this stress response.

The successful tending of a garden can require the tightest of chemical balances. As we well know, some undesirable plants will grow just about anywhere under the harshest of conditions. Some more ornate, delicate and desirable plants require the right acidity of soil, the right water levels, the right balance of nutrients, and so on.

As biological systems, plants are incredibly complicated, but the reason they are green is quite simple. Most green plants contain green pigment molecules known as chlorophylls. The green colour is no accident: it is very much related to the function of the plant. Plants are green because they reflect green light, which is what you see, but they absorb other colours. The absorption of blue light by chlorophylls is what allows them to harness energy from the sun to allow the plant to produce food for itself, and survive.

Steam engines and typical car engines work by somewhat similar processes. Each involves the use of a fuel, which can be burnt, causing a release of energy that is then used to power the vehicle. When a fuel burns, it undergoes a combustion reaction. One example of a fuel that can be used to power a steam train is wood. Wood is primarily composed of cellulose, which in turn is composed largely of individual glucose molecules joined together in long branching chains. While wood is made of a lot of different chemicals that all burn in different ways, the combustion of glucose can be used as a model for understanding how combustion leads to energy production.

The overall chemical equation for the combustion of glucose is:

To try to describe every chemical process going on inside a person would be a near impossible feat. Here I want to describe only one aspect. There are few activities that humans spend more time preparing for, planning for and money on than … eating! One of the main reasons we eat is so that we have energy. Curiously, one of the main molecules used by our bodies to get energy from is glucose. Perhaps even more curiously, the overall chemical equation for the way our bodies get energy from glucose is the same as for the combustion of wood. This is something many of us are familiar with: the concept that we breathe in to get oxygen into our body, and breathe out to rid our bodies of the carbon dioxide that is formed. There is, however, a good reason we don’t eat wood as a source of energy. Humans lack the required molecular machinery to break the wood down into individual glucose molecules.

Since everything is made up of chemicals, I’m sure there are many other examples of chemistry to find in the image. I hope to encourage everyone to marvel in the wonder of our world, and to share this joy with the younger generation. I’ve said before that kids are natural born scientists and investigators – what better way to nurture these traits than to inspire a fascination in understanding how things work.

Jeremy Just MRACI is a Hobart-based PhD candidate in organic chemistry and a passionate science communicator, specialising in chemistry shows and demonstrations. Jeremy writes these columns for members to share with or demonstrate to friends and family without formal chemistry knowledge. 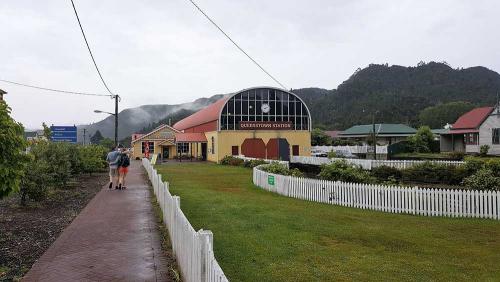 Researchers at Texas A&M AgriLife recently reported that the smell of freshly mown grass is due to a combination of chemicals released by the grass as a stress response.