The saliva of blood-feeding organisms such as leeches and ticks contains a cocktail of bioactive proteins with potent anticlotting activity. Many of these proteins are inhibitors of the enzyme thrombin, a protease that is central to the clotting cascade. In most cases, the physiologically relevant chemical structures of these inhibitors, which are subject to extensive in vivo post-translational modification, are unknown because of difficulties inherent to isolating sufficient quantities of authentic material for biochemical characterisation. A team led by Professor Richard Payne at the University of Sydney has used a cross-disciplinary approach to uncover the molecular mechanism by which two tick-derived anticoagulants, chimadanin and madanin-1, exert their potent inhibition of thrombin (Thompson R.E., Liu X., Ripoll-Rozada J., Alonso-García N., Parker B.L., Pereira P.J.B., Payne R.J. Nat. Chem. 2017, 9, 909–17). Using streamlined methods for chemical protein synthesis developed in the Payne laboratory, the researchers generated the two proteins in multiple modification states. In vitro biochemical analysis showed that sulfation of key tyrosine residues common to both proteins led to increased inhibition of thrombin by almost three orders of magnitude compared with the weakly active unmodified inhibitors. X-ray crystallographic analysis of the thrombin–madanin-1 complex showed that these ligands bind thrombin in a manner unique among known unstructured anticoagulant proteins that is driven by the presence of sulfated tyrosine residues.

Compiled by David Huang MRACI CChem (david.huang@adelaide.edu.au). This section showcases the very best research carried out primarily in Australia. RACI members whose recent work has been published in high-impact journals (e.g. Nature, J. Am. Chem. Soc., Angew. Chem. Int. Ed., Chem. Sci.) are encouraged to contribute general summaries, of no more than 200 words, and an image to David. 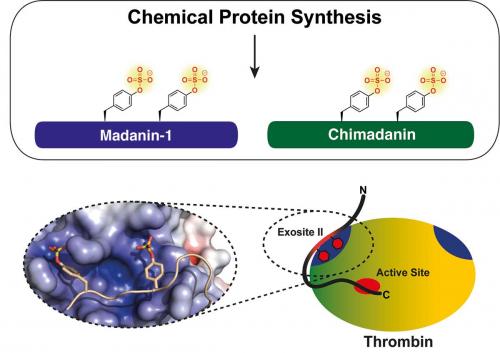