Who doesn’t like blue jeans? They’re practically wrinkle-proof. The indigo dye that provides their distinctive colour holds up to detergents, but ages into that soft, worn look. No wonder the average American wears jeans four days a week. No wonder it’s a $66 billion a year industry, with three billion pairs of jeans manufactured each year.

Indigo is one of the oldest dyes used for colouring textiles. For thousands of years it was extracted from tropical plants in Asia, the Middle East and the Americas. An indigo-dyed garment discovered in a Thebes excavation dates back to 2500 BC.

Commercial synthesis of indigo dye replaced the plant source around 1900. Today, the jean industry uses about 40 000 tonnes of indigo a year. But there is a dark side. Industrial synthesis of indigo from petroleum is a ‘dirty’ chemical process. Chemical production of indigo into an effective dye requires a chemical that becomes toxic to fish and some other aquatic life. And when sent to waste-water treatment plants, it severely corrodes the piping.

Jeans manufacturers are interested in finding a cleaner route to produce the iconic dye. Berkeley bioengineering professor John Dueber has studied the chemical steps plants use to naturally make indigo, and he thinks he has found an environmentally green way for the industry to churn out the dye without the use of the toxic compound.

When plant leaves are healthy, a chemical precursor to indigo, called indican, is caged within a sugar molecule and isolated from the rest of the cell in an organelle. Only when leaves are damaged is indican released from this compartment. The sugar protective cage is removed, allowing a chemical change that makes indigo. Green leaves turn blue.

Dueber’s lab very recently identified the plant enzyme that is essential for adding the protective sugar cage. They plan to insert its gene into bacteria. Addition of a second gene as well as tweaks to a few of the bacteria’s genes should enable the bacteria to produce indican.

Hundreds of litres of the harmless bacteria growing in fermentation tanks would churn out indican, held within the sugar’s molecular embrace. Later, outside the cell, a second enzyme could remove the protective glucose cage, triggering the final chemical transition to indigo. The result: environmentally cleaner jeans.

‘To find green solutions, our lab looks towards nature’, Dueber says. ‘We thought going back to the plants would be smart. If we can identify the enzyme the plants use to produce the sugar cage and clone its gene, we think the microbes can make large quantities of indican for dyeing jeans without the use of highly “dirty chemicals”.’

The process would be cleaner in another way. Current indigo production starts with petroleum. But the microbes thrive on cheap and plentiful glucose.

Grad students Tammy Hsu and Zachary Russ worked in a greenhouse last summer, planting seeds, harvesting about half a kilogram of green leaves from a Japanese indigo plant and grinding them up. ‘As you grind the leaves’, Dueber says, ‘they turn into a blue paste because you have released indican from its sugar cage’.

Dueber’s project is supported by a five-year Bakar Fellowship. Since he is in the early stages of the novel indigo project, he needs the time the multi-year support provides to work out the science and then develop a viable commercial strategy.

‘Moving our lab’s research to market is something I have not been trained to do’, he says. ‘I’m excited to be part of this fellowship that connects us with people who can help us identify exactly what we should be filing patents on, and how much proof-of-concept work should be done before we file.’

He’s also finding that the practical business guidance is just what his students are looking for. ‘They want to move their research into the commercial world. For the next five years, they’ll be able to learn from experts who know this world. It’s a fantastic opportunity for all of us.’

The Berkeley indigo research started in 2013 as an entrant in an undergraduate competition called iGEM – the International Genetically Engineered Machines. Dueber advised the Berkeley team. Five undergrads and two graduate student mentors advanced the research, demonstrating that the planned chemical steps could be made to work efficiently and that indican can make a good dye. They received a gold medal and advanced to participate in the world competition.

‘Students want to make a difference with their research’, Dueber says. ‘We’re still going to focus our research on academically interesting questions, but when there are industrial applications, we want to be aware of that. We’d all like to see our indigo research lead to greener blue jeans.’ 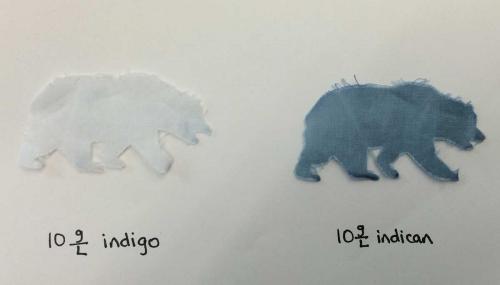 When indigo’s chemical precursor is applied to cotton cloth, a single enzyme can free indigo to dye a white bear to blue. 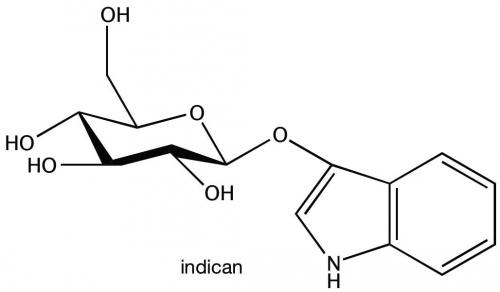 Addition of a second gene as well as tweaks to a few of the bacteria’s genes should enable the bacteria to produce indican.