The Professional Scientists Employment and Remuneration Survey is an annual snapshot of remuneration including base salary and other benefits across sectors, responsibility levels, years of experience, job functions, industries and branches of science.

The survey shows that in the previous year, remuneration for scientists increased by 2.4%, outperforming both the Consumer Price Index and general wages growth. This increase underlines the value that scientists deliver every day at the enterprise and sector levels.

While average remuneration for scientists grew, the survey also found a level of dissatisfaction around pay levels. More than a third of respondents reported being dissatisfied with their current level of remuneration and over a third said they were considering leaving their current employer. For those who were considering leaving, pay was among the most frequently cited contributing factors. Over a third of respondents in both the public and private sectors had received no pay increase at all in the previous year. Many were concerned that their remuneration package was falling behind market rates for those undertaking similar work, and that their package did not reflect the level of responsibility they undertook in their day-to-day work.

There was broad concern about science skills, with around seven in ten respondents saying cost-cutting was affecting science capability in their organisation and over four in ten saying their equipment capabilities were growing faster than their staffing. Over half said deprofessionalisation in their organisation was a major concern.

The survey found average remuneration for scientists grew by 2.4% over the previous 12 months. Scientists in the Local Government and Education sectors fared best with increases of 3.1 and 3.0% respectively. Wages also rose significantly in the State Public Service and Government Business Enterprises, with average increases in both sectors of 2.6%. The Australian Public Service and Research Agencies averaged no increase at all. A total of 32.9% of respondents reported that they had not received any increase over the previous 12 months – 35.8% in the private sector and 34.5% in the public sector. This is in comparison with the cost of living increasing 1.0% over the previous 12 months to June 2016 and the Wage Price Index rising by 2.1% over the same period.

By branch of science, salaries of scientists in the Botany, Food Science and Technology and Mathematics fields grew at the greatest rate, receiving average increases of 4.2, 3.0 and 2.8% respectively. The weakest wages growth was in the Physics and Environmental Science fields, with increases of 1.3 and 1.2% respectively.

Across all sectors employing scientists, a full-time professional scientist takes home an average annual base salary of $107 557 and total package of $124 648, with the highest average packages in the Education and Government Business Enterprise sectors with total packages of $140 438 and $137 929 respectively.

Some 34.8% of respondents were considering leaving their current job and pay was among the most frequently cited determining factors; 8.5% had changed jobs in the previous 12 months, and, of those, 27.3% had moved for a pay increase, 40.9% had moved due to an unhealthy workplace culture and 36.4% had moved for further professional development opportunities. Of those who were considering changing employers, a pay increase, promotion, greater access to continuing professional development and improved work–life balance were the most commonly cited factors that would alter their intention to leave.

A total of 13.5% of those surveyed across all sectors were paid bonuses or incentives in the last year. The highest average bonuses were in the Private sector and Education sectors.

Respondents worked on average 44.2 hours per week including 5.7 hours of overtime. Only 11.9% received monetary payment in recognition of their overtime, a significant issue in view of the 18.1% of respondents reporting that they were expected to work longer hours in the past year compared to the previous one. The average number of hours worked per week was greatest for those working in Computing, Teaching or Training and Sales and Marketing.

Deprofessionalisation – defined as the diminution of science capability across responsibility levels, industries and job functions – was seen as a major concern by 53.1% of respondents. A total of 13.9 and 22.4% of respondents respectively said adherence to professional standards and the level of service quality had declined in their organisation over the previous 12 months; 80.9% agreed or strongly agreed that cost-cutting was affecting their organisation’s science capability.

Respondents ranked job security, remuneration and a positive workplace culture as their top three personal work priorities, followed by work–life balance, career progression and flexible work arrangements. Some 56.4% of respondents said that staff morale had declined and 61.0% reported that worker fatigue had increased in their organisation over the previous 12 months.

Overall, the survey found the mean base salary reported was $117 473 for males compared with $96 748 for females, and the mean total package for males was $135 929 compared with $112 385 for females. Female respondents’ reported earnings were less than their male counterparts across job functions with the exception of Quality Control and Production and Computing, and less irrespective the level of qualification. Lower remuneration for female respondents was apparent across all levels of responsibility with the exception of the graduate level.

This is a modified exerpt of key results from the Professional scientists employment and remuneration summary report 2016. The summary and full reports are available at www.professionalsaustralia.org.au/financial-edge/salary-survey-reports/scientists5. 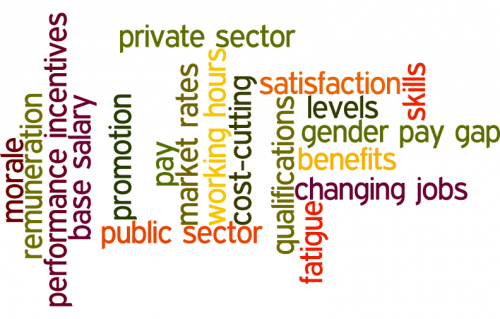 My organisation’s scientific capability is very strong and getting stronger but the key is having sufficient technical personnel and expertise to support the scientific research. – Survey respondent

Our knowledge and skills are not appreciated or rewarded in terms of recognition or pay rates. – Survey respondent